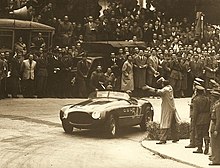 Marzotto and Crosara in the winning Ferrari 340 MM

The 1953 Mille Miglia, was the second round of the 1953 F.I.A. World Sportscar Championship and was held on the open-road of Italy, on 26 April 1953. The route was based on a round trip between Brescia and Rome, with start/finish, in Brescia.[1]

A total of 577 cars were entered 1953 running of the Mille Miglia, across eight classes based on engine sizes, ranging from up to 750cc to over 2.0 litre, for both Touring Cars and Sport Cars. Of these, 490 cars started the event. Although this not strictly a race against each other, this is race against the clock, as the cars are released at one-minute intervals with the larger professional class cars going before the slower cars, in the Mille Miglia, however the smaller displacement, slower cars started first. Each car number related to their allocated start time. For example Juan-Manuel Fangio’s car had the number 602, he left Brescia at 6:02am, while the first cars had started late in the evening on the previous day.[1]

The race started at 22:01 on 25 April, when departed Brescia in his Renault 4CV/1063. The faster car would leave the following morning, when conditions were warm and dry. After nine and half hours, all the cars were on their way to Rome.[1][2]

The Alfas took the early lead, with Sanesi controlling the pace, averaging 113 mph, on the leg to Verona, but his drive ended with an accident on the road to Rome. The Ferrari of Farina had crashed out, and Kling assumed the lead, only to retire from an accident himself.[2]

Ferrari 340 MM spider Vignale which won in the hands of Giannino Marzotto, pictured in the Enzo Ferrari Museum

Just past Siena, Marzotto remembered that the Ferrari mechanics did not change his engine oil at the last control point, as they were unable to open the bonnet. After making a U-turn, he raced back to Siena, where his mechanics cut a hole in the bonnet, directly over the engines oil filler cap, and topped the oil up accordingly. Meanwhile, Fangio’s Alfa was now leading, but surrender to the chasing Marzotto when his steering started to play up along with fading brakes. Although Marzotto suffered two minor crashes, he took it all the way to Brescia, to win his second Mille Miglia, repeating his success of 1950. In second place with a remarkable drive was Fangio. For most of the return leg, his Alfa had effective steering on one front wheel.[2][3]

Marzotto, partner by his navigator, , won in a time of 10hr 37:19mins., averaging a speed of 88.96 mph. 11:44mins adrift in second place was Alfa-Romeo 6C 3000CM of Fangio. The third different car on the podium was the Lancia of Bonetto. Another Ferrari came home in fourth, driven by Cole. The top Aston Martin was fifth in the hands of Reg Parnell. Apart from Aston Martin’s fifth place, the other foreign challenges faded away. Belgian journalist, Paul Frère won the unlimited touring class in an unlikely 5.3-litre Chrysler Saratoga saloon.[2][4][5][6][3]

The race had dramatic farce. Film director, Roberto Rossellini drove a Ferrari. Having recently married film star Ingrid Bergman, he raced against her wishes. At Rome, she flung herself across the car and refused to move until he agreed to withdraw.[3]

The event was marred by the fatal accident, which cost the French navigator, his life when crashed his Jaguar C-Type.[5][6]

Of the 490 starters, 283 were classified as finishers. Therefore, only a selection of notably racers has been listed below.

Class Winners are in Bold text.

Championship points were awarded for the first six places in each race in the order of 8-6-4-3-2-1. Manufacturers were only awarded points for their highest finishing car with no points awarded for positions filled by additional cars. Only the best 4 results out of the 7 races could be retained by each manufacturer. Points earned but not counted towards the championship totals are listed within brackets in the above table.