Lewis Hamilton, champion of the 2008 Formula One season 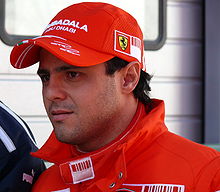 Felipe Massa finished second in the World Drivers' Championship, one point behind Hamilton 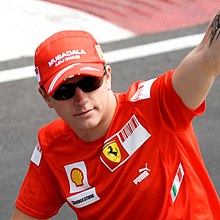 Ferrari took the Constructors' Championship for the second year in a row.

The 2008 FIA Formula One World Championship was the 62nd season of Formula One motor racing, recognised by the Fédération Internationale de l'Automobile (FIA) – the governing body of motorsport – as the highest class of competition for open-wheel racing cars. The championship was contested over eighteen races commencing in Australia on 16 March and ending in Brazil on 2 November. The 2008 season saw the debut of the Singapore Grand Prix, which was held at the Marina Bay Street Circuit, in Marina Bay, Singapore and was the first Formula One race held at night. The European Grand Prix moved to a new venue at the Valencia Street Circuit, in Valencia, Spain.

Lewis Hamilton won the Drivers' title by a point – by overtaking Toyota's Timo Glock on the final corner of the final lap of the final Grand Prix of the season to claim the required 5th-place finish to win the championship – from Brazilian Felipe Massa, while Massa's teammate, the 2007 world champion Kimi Räikkönen, was ranked third, with two wins. Scuderia Ferrari Marlboro won the Constructors' title.[1] In winning the Drivers' title, Hamilton became the youngest driver ever to win the title (a record since surpassed by Sebastian Vettel winning the 2010 Drivers' title) and the first black driver to do so. He was also the first British champion since Damon Hill in 1996.[2]

Eleven teams competed in the championship, although Super Aguri withdrew on 6 May from the 2008 Formula One season due to financial troubles, completing four races. New technical rules for 2008 included the banning of traction control after it was re-introduced in 2001, at the Spanish Grand Prix. Fernando Alonso won the first race held in Singapore; however, only after teammate Piquet deliberately crashed to cause a Safety Car period which helped Alonso's strategy. When Piquet admitted this to the press in 2009 Renault team-principal Briatore resigned. Some journalists dubbed this "Crashgate".

This was the last season for the Honda team before they pulled out of F1 later in December due to the financial difficulties. Honda would return as an engine supplier between 2015 and 2022. Then, Ross Brawn bought the team and renamed it to Brawn GP in February 2009 using the Mercedes-Benz engines. This was also the last Formula One season to race with grooved tyres, used since 1998, before slick tyres returned to Formula One in 2009.

It was the first time in the history of Formula One that all teams used the same two drivers throughout the season.

There was a total of seven teams signed up to compete in the championship through an agreement with Formula One Management, with the other four major manufacturers in the Grand Prix Manufacturers' Association (GPMA) having signed a Memorandum of Understanding at the 2006 Spanish Grand Prix. All teams in both groups have two spots each on the 2008 grid. The following teams and drivers competed in the 2008 FIA Formula One World Championship:[3] Teams competed with tyres supplied by Bridgestone.

On 14 February 2006 the FIA president Max Mosley announced that all teams interested in competing in the 2008 World Championship would have a seven-day window during which they would have to submit an application to compete.[36] All eleven current teams applied, as well as several others. On 28 April 2006 the FIA announced that all of the current teams' applications for the 2008 season were granted, along with a new team Prodrive, fronted by the ex-BAR and -Benetton principal David Richards. There were 21 applications in total, several new teams applying included European Minardi F1 Team Ltd, Jordan Grand Prix, Direxiv and Carlin Motorsport.[citation needed] However, despite the Prodrive application being accepted, Richards later announced that the team would not race in 2008 due to a dispute over the legality of customer cars.[37]

After competing in the sport for ten years, Ralf Schumacher did not take part in the 2008 season. He was replaced at Toyota by 2007 GP2 Champion, Timo Glock.

After an unsuccessful test for Force India in December 2007, Ralf Schumacher left Toyota to drive for Mücke Motorsport in the DTM series. 2007 GP2 champion Timo Glock, who had also been the test driver for BMW Sauber, returned to a Formula One race seat in place of Schumacher. Christian Klien, previously the test driver for Honda, and the Estonian driver Marko Asmer took up test driver roles at BMW Sauber.

The first multi-team test session started in Jerez on 14 January 2008. Ferrari, McLaren and Toyota all tested their 2008 cars. Williams tested a modified version of the FW29 whilst Renault and Red Bull tested their 2007 entries. Honda, Toro Rosso, Super Aguri and Force India also attended. BMW Sauber was not in attendance as they were launching the F1.08.[63] Testing then moved to Valencia on 22 January. Renault and Williams were the only teams on the track for the first day of testing. They were both testing their 2008 challengers.[64] They were joined by every other team except Super Aguri for the next three days. 1 February saw testing move to Barcelona. Again, all teams but Super Aguri were in action. The first day of testing saw Kazuki Nakajima crash his FW30.[65] It also saw racist abuse directed at Lewis Hamilton.[66] Williams withdrew from testing on day three to try to fix the problem that caused Nakajima's crash. Meanwhile, on 4 February, Ferrari and Toyota moved to Bahrain to continue testing the F2008 and TF108.[67]

On 12 February testing returned to Jerez. Red Bull and Williams were the only teams in action on the first day.[68] The second day of testing saw all teams but Ferrari and Toyota (who were still in Bahrain) attending. After postponing their SA08 launch and cancelling testing at Valencia, Super Aguri turned up to test their SA07B interim car for the first time.[69]

Testing moved to Barcelona on 19 February. The first day of tests got underway in rain with Williams, Red Bull, Renault and Toyota present. Nico Rosberg topped the time sheets for Williams. BMW were instead testing on their own in Jerez.[70] Super Aguri did not turn up despite promising a Q&A with the media. They blamed circumstances beyond their control. On the second day Ferrari turned up and topped the time sheets with Felipe Massa on another wet track. McLaren joined on the final day and Williams finished on top with Nakajima. The final multi-team test began on 25 February with every team but Super Aguri attending. Lewis Hamilton topped the time sheets faster than both Kimi Räikkönen and Michael Schumacher. McLaren continued to outpace Ferrari on day two with both drivers on top and Toyota were fastest with Jarno Trulli on the final day.

Hamilton took pole and his fifth career victory at the first race in Australia. BMW Sauber's Nick Heidfeld finished second while Williams's Nico Rosberg sealed his first podium finish. The race saw only seven drivers finish the race, reduced to six after Honda's Rubens Barrichello was disqualified for exiting the pits under a red light. Despite an engine problem, Toro Rosso debutant Sébastien Bourdais completed over 90% of the race distance, earning him points in seventh.

A grid penalty for impeding drivers and a pit stop mishap left Hamilton in fifth place at Malaysia, while Räikkönen took his 16th career victory after he qualified in second position. BMW Sauber's Robert Kubica finished second for the first time with McLaren's Heikki Kovalainen third.

Hamilton qualified third at Bahrain despite a crash, with Kubica taking his first pole position. Massa won the race with teammate Räikkönen in second. Kubica made it onto the podium, while Hamilton had a bad race, finishing 13th. He was back in the points at Barcelona, while Räikkönen took Ferrari's third consecutive victory, Massa making it another 1–2.

Massa took pole and won for the third successive Istanbul race, Hamilton splitting the Ferraris on the podium. At Monaco, Ferrari locked out the front row with Massa on pole, but on a bad day for Ferrari, with Räikkönen ruining what could have been Sutil's chance to score, Hamilton won the race despite a mid-race barrier scrape causing him a puncture. Kubica finished second and Massa was third.

Hamilton was on pole position at Montreal for the first time since the beginning of the season, a drought of five races, however a pit lane mishap involving himself and Räikkönen eliminated both drivers from the race. Kubica (who also got caught up in the mess but made it through safely) won for the first time with teammate Heidfeld second. Räikkönen started the French Grand Prix on pole, but exhaust problems allowed teammate Massa to get the better of him, and he took his third season victory. Hamilton won back-to-back at Silverstone and Hockenheim. Kovalainen took advantage of Massa's engine failure to take his first career victory at Hungary.

The new Valencia Street Circuit was the new host of the European Grand Prix, Massa taking pole and winning with Hamilton second. At Belgium, Hamilton qualified on pole and finished in first, though he received a 25-second penalty for gaining an advantage during a scrap with Räikkönen. Massa was the classified winner.

Toro Rosso driver Sebastian Vettel became the youngest ever pole man and victor after a stunning weekend at Monza. The race saw a downfall for the big teams, Kovalainen doing a good job for second.

Singapore hosted its first ever F1 race and F1's first ever night race, taking place at the Marina Bay Street Circuit. Massa qualified on pole, however, the race was to be a major blow to his championship. On lap 12, while Massa was leading, Renault driver Nelson Piquet Jr. purposely crashed (see 'Race-fixing controversy' below), although Piquet never released this until dropped from the team after the 2009 Hungarian Grand Prix, assisting teammate Fernando Alonso, who went on to win. He was victorious from a fuel feed problem in Q2 leaving him 15th on the grid, though he still out-qualified Piquet Jr. Rosberg finished on the podium for the second and last time in 2008. Massa was leading ahead of Hamilton, however, when he pitted under the safety car his fuel hose remained attached meaning that the pit crew had to run down the pit lane to detach it. This ruined Massa's race putting him in last position while Hamilton gained 6 points for 3rd place.

Alonso won again in Japan with Kubica second. Hamilton started the race on pole, however he was given a drive through penalty for running wide at the start and shortly afterwards was knocked into a spin by Felipe Massa. He was back to winning ways for the first time since Hockenheim, though, victorious at Shanghai.

At this point, Hamilton had a seven-point lead over Massa, meaning if Massa was to be the victor at his home race in Brazil, Hamilton would need to finish fifth, and he was holding this position though being stalked by Vettel, who eventually passed him on lap 69, as Massa won to momentarily take the title. Hamilton eventually regained fifth place, however, by passing Glock, who was struggling on dry tyres, and finished fifth to take the title by one point from Massa.

In a scandal that became known as "Crashgate" in the media, during the 2009 season around the time of the Belgium Grand Prix, allegations by former Renault driver Nelson Piquet Jr. about his crash in the 2008 Singapore Grand Prix led to charges of race-fixing against Renault and the departure of team boss Flavio Briatore and engineering director Pat Symonds.

Points are awarded to drivers and constructors as follows: