For other uses, see AGCO (disambiguation). 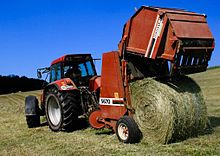 AGCO was established in 1990 when executives at Deutz-Allis bought out Deutz-Allis North American operations from the parent corporation KHD (Klöckner-Humboldt-Deutz), a German company that owned the Deutz-Fahr brand of agriculture equipment. KHD had purchased portions of the Allis-Chalmers agricultural equipment business five years earlier.[3]

1995 saw the purchase of the AgEquipment Group,[7] which manufactured tillage equipment and loaders under the Glenco, Tye and Farmhand brands. In 1996, acquisitions went international with the purchase of Iochpe-Maxion in Brazil.[4] This was the Brazilian company that had rights to the Massey Ferguson brand and manufacturing in the region, as well as the Maxion brand of industrial equipment. This was also the year that AGCO purchased Deutz Argentina, the number one leader of tractors in Argentina.[8] Also in 1996, AGCO purchased Western Combine Corporation and Portage Manufacturing in Canada.[9] Western Combine had previously purchased the assets of the Massey Combine Corporation's combine operation, which had been spun off by Massey-Ferguson. 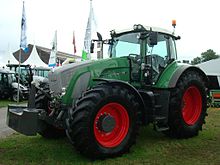 1997 was the year of the major purchase of Fendt in Germany, the leading German tractor company.[10] Fendt is well known for its advanced technology. AGCO also acquired Dronningborg Industries in Denmark, the manufacturer of European Massey-Ferguson combines, and former manufacturer of Dronningborg combines.[11]

For the year 2000, AGCO bought out its partner CNH Global N.V. in the Hay and Forage Industries joint venture.[14]

In 2001, AGCO purchased Ag-Chem Equipment, expanding its application equipment business.[15] Ag-Chem Equipment was based in Jackson, Minnesota and developed the TerraGator flotation-type and RoGator rowcrop-type applicators. Also that year, the SpraCoupe and Willmar brands moved their manufacturing from Willmar, MN to the Jackson, Minnesota facility and the Agco-Allis and White tractor lines were merged in North America under the AGCO brand, continuing in the orange color.

2004 brought about the purchase of the Valtra tractor company from the Kone Group, in Finland. Valtra has licensing agreements with the Eicher company in India for tractor production, and also with the HEMA group in Turkey. The purchase of Valtra also included SISU Diesel engines. A Finland based diesel engine manufacturer with production in Brazil as well.[18][19] 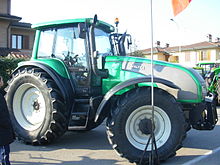 2006 saw a re-focusing of the various brands, and the reduction of individual brands. AGCO announced plans to combine some, and make some only part of a larger brand, or co-branding. Examples include the Massey Ferguson 9635 Hesston self-propelled swather, and the AGCO 9365 Hesston self-propelled swather. Challenger has seen further expansion with the further consolidation of the AgChem brand into Challenger, and the introduction of Agritalia built tractors and an articulated Challenger tractor.

In 2011, the firm plans to transfer its high-horsepower wheeled-tractor assembly of tractors sold in North America from Beauvais, France to Jackson, Minnesota, where it will expand the plant by 75,000 square feet (7,000 m2).[27]

In October 2011, AGCO purchased GSI. It was based in Assumption, Illinois and manufactures grain storage and handling equipment as the GSI Group.[3]

In 2017, the firm acquired Precision Planting, LLC, a planting equipment and technology business.[33]

In 2017, the firm acquired the forage machinery of Lely, including balers, loading wagons, mowers, tedders and rakes. This included factories in Wolfenbuettel (D) and Waldstetten (D). The factory in Maassluis (NL) will be closed in 2018.