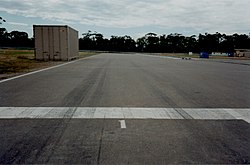 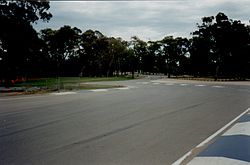 Pole position for the Adelaide 500

From 1999 until 2020, the track hosted an annual Supercars race, the Adelaide 500, (in most years a 2 x 250 km race) on a shorter, 3.219 km (2.012 mi) variant of the track. The event became one of the most acclaimed on the Supercars calendar, and is the only event added to the Supercars Hall of Fame.[2] During Adelaide's era hosting the Australian Grand Prix, the circuit also hosted annual non-championship races for the Australian Touring Car Championship, the previous incarnation of Supercars.

Between 2014 and 2018, an annual ran on the Victoria Park Sprint Circuit, a shortened 1.4 km (0.9 mi) layout. The layout turned right along Wakefield Street after the Senna Chicane and then rejoined the main circuit for the final corners.[3] The event had attracted older Formula 1 machinery, with Ivan Capelli holding the lap record in a March CG891.[4]

The 500-metre-long pit straight is inside the Victoria Park. During the Formula One and early V8 Supercar eras the Victoria Park Racecourse, a horse racing track, was located at the park, though has since been removed. The buildings and grandstands are temporary and removed each year due to ongoing campaigning by the Adelaide Parklands Preservation Association Inc.

At the end of the straight, drivers negotiate the Senna Chicane, so named after triple World Champion Ayrton Senna following his death at the 1994 San Marino Grand Prix. Senna had sat on the pole for the first Adelaide Grand Prix in 1985, and would go on to take the pole in Adelaide 6 times in 9 races, while winning in 1991 (the shortest race in Formula One history due to torrential rain), as well as his last career victory in 1993.

After the chicane the cars take a fast left turn to go uphill on a short straight on Wakefield Road to East Terrace. They then have a series of right angle turns along East Terrace. The short form of the track has three of these.

The full Grand Prix circuit bypasses the turn onto Bartels Road and continues with a sweeping left-right-right into Stag Turn (turn 9). This leads onto the 360-metre-long Jones Straight, known as Rundle Road for the rest of the year and named after Australia's 1980 World Champion Alan Jones. Then there is a fast right-hand sweeper (known as Brewery Bend) onto the 900-metre-long Brabham Straight (named for Jack Brabham), on Dequetteville Terrace where the over 1,000 bhp (746 kW; 1,014 PS) Formula One cars in the turbo era (1985–88) were reaching speeds in excess of 200 mph (322 km/h) making Adelaide easily the fastest street circuit of the time as the only others were the much tighter Monaco, Detroit and Phoenix circuits. The short form of the track rejoins Brabham Straight ⅔ of the way down, so the 640-metre-long Bartels Road straight is longest on that layout. In 2007 this section of track was renamed Brock Straight after touring car driver Peter Brock. At the end of Brabham Straight is a right hand hairpin turn (at the Britannia Roundabout) onto Wakefield Road, then a left turn and long sweeping right hand curve back into Victoria Park behind the pit area. The lap concludes with another right-hand hairpin (Racetrack Hairpin) onto the pit straight.

The track is essentially flat except for a small valley on the Brock Straight, and a slight incline on Jones Straight, while the run up Wakefield Road from turns 3 to 4 also has a slight incline. All of these sections of track run in an east–west direction. The elevation ranges from 36 to 53 metres.

The stadium section also hosted the Pedal Prix and a prologue stage of the Rally and the replacement Targa Adelaide Rally.

The pit straight is used each November for the Sporting Car Club of South Australia's annual John Blanden's Climb To The Eagle. This event commenced as part of the 1985 Formula One with many well known racing identities taking part. The event sees up to 600 sports and exotic cars lined up on the starting grid before leaving to drive to Eagle on the Hill in the Adelaide Hills on the Friday of the weekend when the F1 Grand Prix was traditionally held in Adelaide. Another event held in November is the annual Toy Run which features over 1,000 motorcycle riders donating toys for under privileged children. The Toy Run moved to using the pit straight as its starting point in 2012 after previously starting from Glenelg.