The Alfa Romeo 8C was originally a range of Alfa Romeo road, race and sports cars of the 1930s. In 2004 Alfa Romeo revived the 8C name for a V8-engined concept car which made it into production for 2007, the 8C Competizione.

The 8C designates 8 cylinders, and originally a straight 8-cylinder engine. The Vittorio Jano designed 8C was Alfa Romeo's primary racing engine from its introduction in 1931 to its retirement in 1939. In addition to the two-seater sports cars it was used in the world's first genuine single-seat Grand Prix racing car, the Monoposto 'Tipo B' - P3 from 1932 onwards.[1] In its later development it powered such vehicles as the twin-engined 1935 6.3-litre Bimotore, the 1935 3.8-litre Monoposto 8C 35 Type C, and the Alfa Romeo 8C 2900B Mille Miglia Roadster. It also powered top-of-the-range coach-built production models, including a Touring Spider and Touring Berlinetta.

In 1924, Vittorio Jano created his first straight-eight-cylinder engine for Alfa Romeo, the 1987 cc P2, with common crankcase and four plated-steel two-cylinder blocks, which won the first World Championship ever in 1925. Although it was a straight-8, the 8C designation was not used. 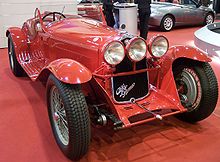 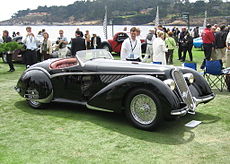 At the same time, since racing cars were no longer required to carry a mechanic, Alfa Romeo built the first single seater race car. As a first attempt, the 1931 Monoposto Tipo A used a pair of 6-cylinder engines fitted side by side in the chassis.[3] As the resulting car was too heavy and complex, Jano designed a more suitable and successful racer called Monoposto Tipo B (aka P3) for the 1932 Grand Prix season. The Tipo B proved itself the winning car of its era, winning straight from its first outing at the 1932 Italian Grand Prix, and was powered with an enlarged version of the 8C engine now at 2,665 cc, fed through a pair of superchargers instead of a single one. 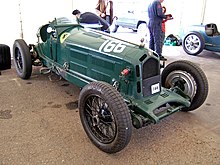 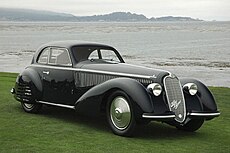 Initially, Alfa Romeo announced that the 8C was not to be sold to private owners, but by autumn 1931 Alfa sold it as a rolling chassis in Lungo (long) or Corto (short) form with prices starting at over £1000. The chassis were fitted with bodies from a selection of Italian coach-builders (Carrozzeria) such as Zagato, Carrozzeria Touring, Carrozzeria Castagna, Carrozzeria Pinin Farina ( later Pininfarina ) and Brianza, even though Alfa Romeo did make bodies. Some chassis were clothed by coach-builders such as Graber, Worblaufen and Tuscher of Switzerland and Figoni of France. Alfa Romeo also had a practice of rebodying cars for clients, and some racing vehicles were sold rebodied as road vehicles. Some of the famous first owners include Baroness Maud Thyssen of the Thyssen family, the owner of the aircraft and now scooter company Piaggio Andrea Piaggio, Raymond Sommer, and Tazio Nuvolari.

The first model was the 1931 '8C 2300', a reference to the car's 2.3 L (2336 cc) engine, initially designed as a racing car, but actually produced in 188 units also for road use. While the racing version of the 8C 2300 Spider, driven by Tazio Nuvolari won the 1931 and 1932 Targa Florio race in Sicily, the 1931 Italian Grand Prix victory at Monza gave the "Monza" name to the twin seater GP car, a shortened version of the Spider. The Alfa Romeo factory often added the name of events won to the name of a car. 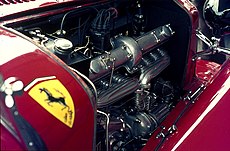 The 8C 2300 Le Mans model on display at the Museo Alfa Romeo was bought by Sir Henry Birkin in 1931 for competition use, but it is not the car in which Birkin and Howe won the 1931 Le Mans 24 hours.

Tazio Nuvolari won the 1935 German GP at the Nürburgring at the wheel of a 3.2 L Tipo B against the more powerful Silver Arrows from Mercedes-Benz and Auto Union.[7]

Eight 3.8-litre versions, sharing no castings with the earlier blocks, were individually built for racing in five months, most being used in the Alfa Romeo Monoposto 8C 35 Type C, as raced by Scuderia Ferrari. (The P3 designation was dropped.) The 3.8 produced 330 bhp (246 kW) at 5500 rpm, and had 320 lb⋅ft (434 N⋅m) from 900 rpm to 5500 rpm.[9] It had 15.5-inch drum brakes all round, using Pirelli 5.25 or 5.50 x 19 tyres at the front and 7.00 or 7.50 x 19 tyres at the rear. Though not a match for the big Mercedes and Auto Union on the faster circuits, they came into their own on the tighter circuits and races. In 1936 Tipo Cs fitted with the troublesome V12 did not live up to expectations, and the 3.8 continued to be used. From 1933 Scuderia Ferrari had managed the racing, and the Ferrari prancing horse appeared on the flanks of the Bimotore, but Alfa Corse began to become more active, and Vittorio Jano went at the end of the 1937 season.[8] In 1938 four Alfa Romeo Tipo 308 racers were built for the three-litre class using 8C engines.

On September 14, 2013, a former Scuderia Ferrari 8C 35, in which Tazio Nuvolari had won the 1936 Coppa Ciano, was sold for £5.9 million; a new world record price for any Alfa Romeo. It was sold by the Bonhams auction house in its Goodwood Revival Meeting Sale in England.[10] The car in question was the ex-Hans Ruesch, ex-Dennis Poore car,[11] which had been one of the early stars of racing at the Goodwood Motor Circuit 1948–55. 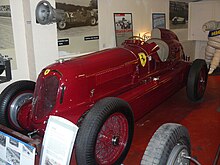 In 1935, to compete with Mercedes Benz and Auto Union, Enzo Ferrari (Race team manager) and Luigi Bazzi (Designer) built a racer with two 3.2 (3.165-litre) engines, one in the front and one in the rear, giving 6.3 litres and 540 bhp (403 kW). The drivetrain layout was unusual. The two engines were connected by separate driveshaft to a gearbox with two input shafts, and two angled output shafts, so each of the rear wheels had its own driveshaft. It could never quite succeed against the Mercedes W25 B of Rudolf Caracciola, and was hard on fuel and tyres. The gain in speed was offset by increased pit times. On May 12, 1935, two were entered in the Tripoli Grand Prix driven by Nuvolari and Chiron who finished fourth and fifth. Chiron managed a second at the following 1935 Avus race.

On June 16, 1935 Nuvolari drove a specially prepared Bimotore from Florence to Livorno and set a new speed record 364 km/h (226 mph) with an average speed of over 323 km/h (201 mph). After that it was sidelined in favour of the Tipo C.[12] It was the first racer to use the Dubonnet independent trailing arm front suspension. The V12 was under development, but was not race ready. It was noticed that the Bimotore had a traction advantage on rough ground, so a version of the Bimotore chassis with the independent Dubonnet front end, and a new independent rear with swing axles with radius rods and a transverse leaf spring was used for the Tipo C 3.8s.

The 8C 2900 was designed to compete in sports car races in general and the Mille Miglia in particular. It used the 2.9 L version of the 8C engine and was based on the 8C 35 Grand Prix racing chassis.[14][15] As such, it had an inline 8-cylinder 2.9-litre engine using two Roots type superchargers fed by two updraught Weber carburettors[16] and fully independent suspension with Dubonnet-type trailing arm suspension with coil springs and hydraulic dampers at front and swing axles with a transverse leaf spring at the rear.[13][15][17]

Scuderia Ferrari entered three 8C 2900As in the 1936 Mille Miglia and again in the 1937 Mille Miglia. In 1936 they finished in the top three positions, with Marquis Antonio Brivio winning, Giuseppe Farina finishing second, and Carlo Pintacuda finishing third.[18] In 1937 they finished in the top two positions, with Pintacuda winning and Farina finishing second; the third 2900A, driven by Clemente Biondetti, did not finish.[19] The 8C 2900A also won the 1936 Spa 24 Hours with Raymond Sommer and Francesco Severi.[18]

An 8C 2900 with Pininfarina cabriolet bodywork was auctioned for US$4,072,000 by Christie's at Pebble Beach, California. This was the tenth highest price ever paid for a car at auction at the time.[24]

In 1938, Alfa Corse, an in-house racing team for Alfa Romeo, took over the activities of Scuderia Ferrari, along with many of their personnel, including Enzo Ferrari. Alfa Corse prepared four 8C 2900B Corto cars for the 1938 Mille Miglia.[26] These used Carrozzeria Touring Superleggera roadster bodies.[26][27] Three of these cars had their engines tuned to give 225 bhp (168 kW),[17] while the fourth, assigned to Biondetti, had an engine from an Alfa Romeo Tipo 308 Grand Prix car, which delivered 295 bhp (220 kW)[28][29] The cars finished in the top two positions, with Biondetti winning and Pintacuda finishing second[26] after leading the race from Piacenza to Terni where his brakes locked up.[30] The other two 8C 2900B Mille Miglia roadsters did not finish; Farina crashed and Eugenio Siena had a blown engine. Piero Dusio finished third in a privately entered 8C 2900A.[26] One of the 2800B Mille Miglia roadsters later won the 1938 Spa 24 Hours with Pintacuda and Severi driving.[31] 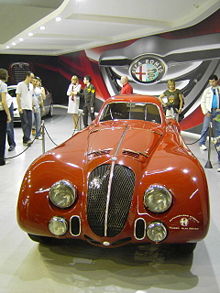 Alfa Corse also prepared and entered a single 8C 2900B, chassis number 412033, for the 1938 24 Hours of Le Mans.[33] The car featured a streamlined coupé body[33] at a time when Le Mans racers were almost always open cars.[34] The aerodynamic coupé was built by Carrozzeria Touring.[33] In 1987, an Italian magazine had the car tested at the Pininfarina wind tunnel, where a Cx of 0.42 was measured, down to 0.37 with air intakes closed.[35] The coupé, driven by Sommer and Biondetti, led for most of the race, but tyre trouble was then followed by a dropped valve. The car was driven to the pits, but had to retire there. At the time the valve dropped, the coupé had a lead of more than 160 km over the next car.[26]

This was the only time the coupé was raced by Alfa Corse. After the war, it was entered in minor races under private ownership, was then displayed at the Donington museum from the 1960s before being added in 1987 to the Alfa Romeo museum, which now runs it at many events.