The Allison Engine Company was an American aircraft engine manufacturer. Shortly after the death of James Allison in 1929 the company was purchased by the Fisher brothers. Fisher sold the company to General Motors, which owned it for most of its history. It was acquired by Rolls-Royce plc in 1995 to become a subsidiary, Rolls-Royce Corporation.

A predecessor of Allison Engine Company, the Concentrated Acetylene Company, was founded in September 1904 by James Allison, and Carl G. Fisher. Avery was the holder of the patent for the product. This company was the predecessor of the Prest-O-Lite Company, a manufacturer of acetylene headlights. An explosion at the acetylene gas works in downtown Indianapolis caused the company to relocate out of town, near the race track in Speedway, Indiana. Allison and Fisher raced automobiles at that track, each owning a race car team. This hobby resulted in Allison building a shop at the track in Speedway where he maintained his fleet of race cars. This shop became the site for Allison Plant #1. Fisher and Allison sold their interest in Prest-O-Lite to Union Carbide for $9,000,000.[1]

The company's only regular production item was a patented steel-backed lead bearing, which was used in various high performance engines.[a] It also built various drive shafts, extensions and gear chains for high power engines, on demand. Later its main business was the conversion of older Liberty engines to more powerful models, both for aircraft and marine use.

Allison needed a place where his race car engines could be modified and repaired. On January 1, 1917 Allison moved into a building at what was to become, in later years, the Indianapolis Motor Speedway. Along with the move, Allison hired Norman H. Gillman, a very talented engineer from a competing race team, as his chief engineer.[4]

Allison moved to Florida to invest in real estate after World War I, leaving Gillman in charge. Allison did not want the company to wither, so he asked Gillman to build a V-12 marine engine worthy of the Allison name. Gillman then proceeded to build an engine that relied on what was learned from building and modifying the venerable Liberty engine.[1]

Allison's company was sold to Captain Eddie Rickenbacker in 1927 for $700,000 after Allison moved to Florida. In 1929, shortly after the death of James Allison, the company was purchased by the Fisher brothers. The Fishers sold the company to General Motors, who owned it for most of its history. The Allison Engine Company was acquired in 1995 by Rolls-Royce plc,[5] and became the Rolls-Royce Corporation subsidiary.[2]

In the late 1920s the United States Army funded the development of a series of high-power engines, as part of its hyper engine series, which it intended to produce on Continental Motors' production lines. Allison's manager, Norman Gilman, decided to experiment with his own high-power cylinder design. Allison's engine became Manufacturer Serial No. 1, AAC S/N 25-521. It was the X-4520, a 24-cylinder air-cooled 4-bank “X” configured engine designed by the Army Air Corps and built by the Allison Engineering Company in 1925. The result was presented to the Army in 1928, which turned down the development proposal.[2]

In 1929, shortly after the death of James Allison, the company was purchased by the Fisher brothers,[6] who instructed it to use the cylinder design for a six-cylinder engine for a "family aircraft". Before work on this design had progressed very far, Fisher sold the company to General Motors, which ended development due to financial pressures of the Great Depression. Nevertheless, Gilman pressed ahead with the cylinder design, building a "paper project" V-12 engine. The Army was once again uninterested, but instead suggested Allison try selling it to the United States Navy. The Navy agreed to fund development of A and B models to a very limited degree for its airships, until the crash of the USS Macon in 1935, when the Navy's need for a 1,000 hp (750 kW) engine disappeared. 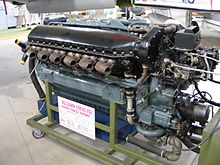 By this time the Army had become more interested in the design, and asked Allison to continue with a new "C" model. They had few funds of their own to invest, and Allison supported much of the development out of their own pocket. The V-1710-C first flew on 14 December 1936 in the Consolidated A-11A testbed. The V-1710-C6 completed the Army 150 hour Type Test on 23 April 1937, at 1,000 hp (750 kW), the first engine of any type to do so. By then all of the other Army engine projects had been cancelled or withdrawn, leaving the V-1710 as the only modern design available. It was soon found as the primary power plant of the new generation of United States Army Air Corps (USAAC) fighters, the P-38 Lightning, P-39 Airacobra and P-40 Warhawk.

The Army had been leaning heavily towards exhaust-driven turbochargers, instead of the more common mechanically driven superchargers, favoring the theoretical advantage of using the otherwise wasted energy in the exhaust. Thus, little effort was invested in equipping the V-1710 with a complex two-stage supercharger, and when placed in aircraft designs like the P-39 or P-40, which lacked the room for a turbocharger, the engine suffered tremendously at higher altitudes. It was for this reason in particular that the V-1710 was later removed from the P-51 Mustang and replaced with the Rolls-Royce Merlin.

With the need for the V-1710 winding down at the end of the war, Allison found itself with a large production infrastructure that was no longer needed. For this reason, in 1947, the Army decided to take General Electric's versions of Frank Whittle's jet engines and give them to Allison to produce instead. The main production model was GE's 4,000 lbf (18 kN) I-40, produced as the Allison J33. By the time production ended in 1955, Allison had produced over 7,000 J33s.

Allison also took over GE's axial flow engine design, becoming the Allison J35. The J35 was the primary powerplant for the F-84 Thunderjet and F-89 Scorpion, as well as appearing on numerous prototype designs. The J35 also finished production in 1955, by which point over 14,000 had been delivered.

Allison also began development of a series of turboprop engines for the U.S. Navy, starting with the T38 and a "twinned" version as the T40. The Navy was interested only in the T40,[citation needed] but the complexities of the drive shaft arrangement doomed the engine and the project was eventually cancelled. Allison tried again with the T56, basically an enlarged T38 with the power of the T40, and was eventually rewarded when this engine was selected to power the C-130 Hercules. Allison turboprop engines were also used to re-engine Convair prop airliners which resulted in the Convair 580 turboprop passenger aircraft which was widely used by local service and regional airlines in the U.S. such as Allegheny Airlines, the original Frontier Airlines, North Central Airlines, as well as major carriers American, Eastern, United, and Pan-Am.

Over the years a family of engines based on the T56 configuration was developed, culminating in the T406/Allison AE1107 turboshaft for the V-22 Osprey, the Allison AE2100 turboprop, used on newer models of the C-130 and the Allison/Rolls-Royce AE 3007 turbofan which propels many regional airline aircraft, such as the Embraer ERJ 135, ERJ 140 and ERJ 145 family of regional passenger jets that continue to be widely used in the airline industry.

One of Allison's most successful projects is the Model 250 turboshaft/turboprop engine family, which was started by the company in the early 1960s, when helicopters started to be powered by turbine, rather than reciprocating, engines. Allison turbine engines were used to power Bell 206 Jet Ranger and Long Ranger helicopters as well as the initial version of the Sikorsky S-76 helicopter.

In the mid-1970s the Allison Division of General Motors Corporation in Detroit designed ceramic components into the Allison GT 404-4 truck engine. Allison continued to work with General Motors on development of ceramic -turbine powered engines until the early 1990s. During their work they were able to engineer fairly stable automobile engines that were capable of burning a variety of fuels, such as gasoline, Diesel, kerosene, alcohol, vegetable oil, and coal powder.

In the 1980s Allison collaborated with Pratt & Whitney on demonstrating the 578-DX propfan. Unlike the competing General Electric GE-36 UDF, the 578-DX was fairly conventional, having a reduction gearbox between the LP turbine and the propfan blades. Noise considerations, plus a significant reduction in the real cost of aviation fuel, brought the NASA funded program to a halt.

In 1995, Allison tested a prototype lift fan for the Joint Strike Fighter Program[7] and a LiftFan nozzle was tested in 1997 at NASA's Lewis facility.[8] By 1997, a complete prototype had been demonstrated[9] by the Rolls-Royce owned but American-controlled Allison Advanced Development Company.[10]

In 1965 a drag racer, Jim Lytle, created a car known as Quad Al which incorporated four World War II surplus V-12 Allison aero-engines in a four-wheel drive configuration, and developing approximately 12,000 hp (8,900 kW). Although its engines started, it never ran; the creator could not afford the custom gearboxes and clutches required to handle the enormous torque generated by the engines. The car survives, without its engines, in Indiana, USA.[11]

In 1992 General Motors tried to sell Allison to concentrate on rebuilding automobile market share.[12] Rolls-Royce attempted to buy the company in 1993, but General Motors opted for a management buyout instead for $370 million.

In 1995 US authorities approved, with restrictions on Joint Strike Fighter Program, the purchase of Allison by Rolls-Royce.[10] The price was $525 million.[13] In the year 2000, some of these restrictions were alleviated,[14] and in 2001 the US government chose the F-35 with Rolls Royce LiftFan and Pratt & Whitney F135 engines.[15]