The fluid is optimized[1] for the special requirements of a transmission, such as valve operation, brake band friction, and the torque converter, as well as gear lubrication.

ATF is also used as a hydraulic fluid in some power-assisted steering systems, as a lubricant in some 4WD transfer cases, and in some modern manual transmissions.

Note that the friction modifier only means that the fluid sticks to the surface of the metal a little more strongly, and therefore only helps to prevent early wear. It would be required for Ford, BorgWarner to prove that their transmissions are somehow harmed by friction modifiers. In many countries, Ford have said that the modern Dex3 fluid is fine for the same transmissions that they say require the older standard.[citation needed]

Each manufacturer has specific ATF requirements. Incorrect transmission fluid may result in transmission malfunction or severe damage, however this occurs where the viscosity is extremely different.[citation needed] 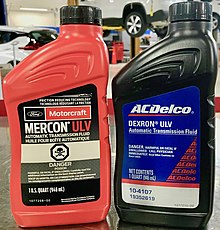 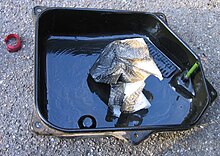 Oil pan of an automatic transmission with sedimented wear

The use of a lint-free white rag to wipe the dipstick on automatic transmissions is advised so that the color of the fluid can be checked. Dark brown or black ATF can be an indicator of a transmission problem, vehicle abuse, or fluid that has far exceeded its useful life. Over-used ATF often has reduced lubrication properties and abrasive friction materials (from clutches and brake bands) suspended in it; failure to replace such fluid will accelerate transmission wear and could eventually ruin an otherwise healthy transmission. However, color alone is not a completely reliable indication of the service life of ATF as most ATF products will darken with use. The manufacturer's recommended service interval is a more reliable measure of ATF life. In the absence of service or repair records, fluid color is a common means of gauging ATF service life. 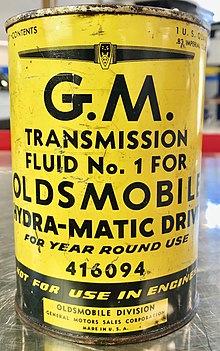 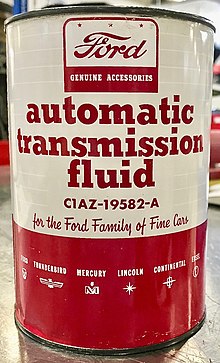 In the 1940s, 1950s, 1960s, and early 1970s, ATF contained whale oil as a rust and corrosion inhibitor.[11] A moratorium on whale oil at that time prevented the continued production of older ATF such as the original 1967 DEXRON formulation (Type B), and the fluids which preceded it. Vintage GM (1940-1967), Ford (1951-1967, and Chrysler products (1953-1966) used GM Type A fluid or GM Type A Suffix A fluids; these fluids are no longer produced. GM recommends Dexron-VI fluid, Ford recommends Mercon V fluid, and Chrysler recommends ATF+4 fluids for vintage transmission use.

Through the late 1970s, Ford transmissions were factory filled with a fluid identified as ESW M2C33-F. To provide a fluid that would be available to the general public for service fill, oil companies and other than factory fill suppliers were allowed to develop fluids meeting the ESW M2C33-F specification and market these fluids under their own brand names but identified as Type F. 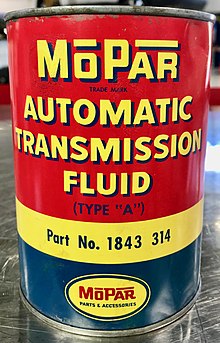 The second generation of transmission fluid was released in 1974 as the factory fill specification, ESW M2C138-CJ. This fluid was developed to modify the vehicle shifting characteristics and to provide considerable improvement in the oxidation resistance and anti-wear performance.

No service fluids were developed and for a short time, DEXRON fluids approved by General Motors were considered acceptable. With continuing changes and improvements in transmission design, a centrifugal lock-up torque converter clutch was introduced into the C5 transmission to smooth engine vibrations sensed by the occupant of the vehicle. An associated shudder problem forced the introduction of the factory fill specification ESP M2C166-H. Servicing transmissions with DEXRON fluids was unacceptable since not all DEXRON fluids were capable of eliminating the shudder phenomenon. The fluids that could be used were a subset of the DEXRON fluids. The advent of Type H as factory fill necessitated the development of a service fluid specification to match the performance expected from Type H. This resulted in the release of the MERCON specification in 1987.[12] 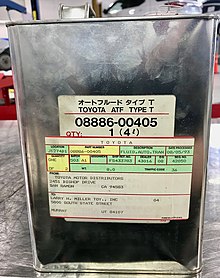 The development of modulating and continuous slipping clutch converters has prompted the need to develop the MERCON V specification. Included are requirements to verify the anti-wear capabilities and anti-shudder characteristics of the fluid.

The MERCON V specification was further modified some time prior to 2007 to make it backward-compatible with MERCON. Ford has / is terminating all license agreements for the manufacture and sale of MERCON in favor of MERCON V.[13]

In 1967, Ford produced the Type-F fluid specification. The Type-F specification was intended to produce a “lifetime” fluid which would never need to be changed. This was the first of many Ford “lifetime” fluids. The 1974 Ford Car Shop Manual reads "The automatic transmission is filled at the factory with "lifetime" fluid. If it is necessary to add or replace fluid, use only fluids which meet Ford Specification M2C33F. Many other transmission manufacturers have followed with their own "Lifetime" automatic transmission fluids".

How ATF Can Last a "Lifetime"

To understand how a fluid can last a "lifetime", a study of the 1939 Chrysler Fluid Drive Fluid is helpful. The lesson learned by Chrysler with its fluid drives is applicable to modern automatic transmissions as well.[14] The November 1954 edition of Lubrication Magazine (Published by The Texas Company, later known as Texaco) featured a story called "Evolution of the Chrysler PowerFlite Automatic Transmission". This article described the fluid used in the 1939 Chrysler Fluid Drive and its subsequent revisions and enhancements through 1954.

The fluid operates under almost ideal conditions in what is essentially a hermetically sealed case, the small amount of atmospheric oxygen initially present is removed by a harmless reaction with the fluid so as to leave a residual inert (nitrogen) atmosphere. As a consequence, it has not been necessary to drain and replace the fluid, and the level-check recommendation has been successively extended from the original 2,500 miles to 15,500 miles and finally to "never" - or the life of the car.

Since drains and level checks were not only unnecessary but frequently harmful ( through the introduction of more air, and seal-destroying dirt) Chrysler eventually left off the tempting level inspection plugs. This mechanism is, therefore, one of the very few that are actually lubricated for the life of the car. There are now myriad examples of couplings that have operated well over 100,000 miles without any attention whatsoever and were still in perfect condition when the car was retired. 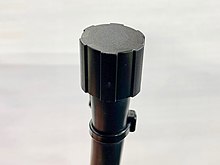 Any automatic transmission fluid will last longer if the transmission case could be hermetically sealed, but transmissions typically have two potential entry points for air:

Chevrolet Colorado Example: According to the Scheduled Maintenance Guide of a 2018 Chevrolet Colorado with "Lifetime Fluid" could have two different fluid service intervals depending upon how the vehicle is driven:[22]

Under "Normal" driving conditions, the automatic transmission fluid and filter never need to be changed. 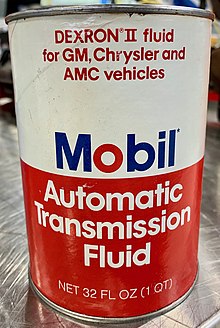 For over 70 years, the oil aftermarket has produced both licensed, and non-licensed, formulations of automatic transmission fluids (ATF).[23][24] Today, aftermarket fluids asserted by their manufacturers to be compatible for use in various brands of automatic transmissions continue to be sold under names such as Multi-Purpose and Multi-Vehicle fluids. Non-licensed fluid is typically less expensive, these fluids are not regulated or endorsed by the vehicle manufacturer for use in their transmissions. Vehicle manufacturer approved and licensed fluids must have the license number printed on the product information label of the container or on the container housing. Non-Licensed fluids do not show a license number. Make sure the fluid to be installed into a transmission matches the recommended fluid in the specifications section of the vehicle's owner's manual.

ATF which has been mislabeled, has misleading labeling, or is fraudulently bottled as another product is an ongoing problem. Some of these fluids have led to multiple transmission failures.[25] The three organizations shown below are trying to stop this problem in the United States.