As a racing car, the E9 was very successful in the European Touring Car Championship and the Deutsche Rennsport Meisterschaft, especially the 3.0 CSL homologation model. 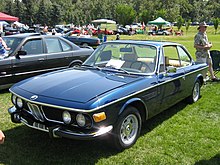 The first of the E9 coupés, the 2800 CS, replaced the 2000 C and 2000 CS in 1968. The lead designer was Wilhelm Hofmeister.[1][2] The wheelbase and length were increased to allow the engine bay to be long enough to accommodate the new straight-six engine code-named M30, and the front of the car was restyled to resemble the E3 sedan.[1] The rear axle, however, remained the same as that used in the lesser "Neue Klasse" models and the rear brakes were initially drums - meaning that the 2800 saloon was a better performing car, as it was also lighter. The CS' advantages were thus strictly optical to begin with.[3] The 2800 CS used the 2,788 cc (170.1 cu in) version of the engine used in the E3 sedans.[1] The engine produced 125 kW (168 hp) at 6000 rpm.[4]

At the 1969 Geneva Motor Show, BMW unveiled the "2800 Bertone Spicup" concept car.[6] This model, which has a similar appearance to the 1967 Alfa Romeo Montreal, did not reach production.

In the United States, 1974 models have protruding 5 mile per hour bumpers.

Introduced in May 1972,[7] the 3.0 CSL was a homologation special built to make the car eligible for racing in the European Touring Car Championship. 1,265 were built.

The "L" in the designation meant leicht (light), unlike in other BMW designations, where it meant lang (long). The lightness was achieved by using thinner steel to build the unit body, deleting the trim and soundproofing,[8] using aluminium alloy doors, bonnet, and boot lid, and using Perspex side windows.[7] The five hundred 3.0 CSLs exported to the United Kingdom were not quite as light as the others, as the importer had insisted on retaining the soundproofing, electric windows, and stock E9 bumpers on these cars.[7][9] The CSL was not sold in the United States.

The CSL competed in Group 2 form in the European Touring Car Championship, with CSL drivers winning the Drivers title six times in the years 1973 and 1975 to 1979.[16] The CSL also competed in Group 5 Special Production guise, winning three rounds of the 1976 World Championship for Makes. In FIA Group 4 spec, notably when driven by Hans-Joachim Stuck (car featured in Enthusia Professional Racing), they competed against racing versions of the Porsche 911 and Ford Capri with some success.

The 3.0 CSL was raced in the IMSA GT Championship in 1975, with Sam Posey, Brian Redman, and Ronnie Peterson winning races during the season.[19]

The 3.5 CSL was built for Group 5 racing and BMW won three races in the 1976 World Championship for Makes with this model.

The first two BMW Art Cars were 3.0 CSLs; the first was painted by Alexander Calder and the second by Frank Stella.[22]

In 2015, BMW introduced the 3.0 CSL Hommage concept car at the Concorso d'Eleganza Villa d'Este. The car is a tribute to the 3.0 CSL. It has an inline-six engine with an eBoost hybrid system in the rear of the car. As a homage to the original, the 3.0 CSL Hommage has a minimal interior to keep the weight as low as possible; carbon fibre and aluminium are used in the cockpit for the same reason. The Hommage has Laser-LED lights similar to those in the i8.[24]