Blackburne was a trade name of Burney and Blackburne Limited a British manufacturer of motorcycles from 1913 to 1922 at Tongham near Farnham, Surrey. They were also a major supplier of engines to other motor cycle and light car makers and continued to make these until 1937. Burney and Blackburne also made small aircraft engines.

The origins of the Blackburne motorcycle engine start with Geoffrey de Havilland, who had designed and built a motor cycle before he became interested in aviation. In about 1905 he sold the designs and patterns to two student friends for £5 when he was short of money, and they went on to form the Blackburne engine company. [1]

The Blackburne motorcycle given to Harold Blackburn, used both as a solo and sidecar to promote flying displays with the Blackburn Type I.

Production moved to Tongham, Surrey shortly after incorporation, and they remained there throughout the war, but adverts for their engines from 1922 show a change of address to Atlas Works, Bookham, Surrey.[3] This was the year motorcycle production ceased, and the main focus became engine manufacture. The Atlas works was 56,000 square feet by the end of the war, and is the subject of research by P. Taplee of the local history society. [4] Although there are reports of a link with Osborn Engineering Company (OEC)[3], these were most likely just another customer for Blackburne engines.

Blackburne motorcycles performed well in the 1913 and 1914 ACU six days trials. Three 499cc Blackburne motorcycles were entered in the ACU six days trial in 1914 one ridden by John Spear Roberts (ex Motosacoche Ltd [4]), who is named as joint applicant in a Blackburne patent of 1918.[5] In the judges summary of the event they stated that the "Blackburne machines are also worthy of very favourable notice on account of their good engine design".[6] With the outbreak of the war in mid-1914, three directors of Burney and Blackburne Ltd volunteered as despatch riders, these were Cecil Burney, Alec Burney and C.Q. Roberts (also Q.A.Roberts his brother).[7] Reporting back to the Motor Cycle later that year, Alec Burney had lost his machine when it was run over by the heavy artillery during the night. Reporting in November[8] Cecil Burney stated that his Armstrong (hub gears) were standing up wonderfully well, but was adamant that a hand clutch (instead of the common foot clutch) was an absolute requirement. In November 1916 it was reported[9] that the Burney brothers had received lieutenants commissions, Alec running a motor cycle repair base in France, and Cecil running a repair shop for engine-driven electrical lighting units for a signals station.

After the 1914-1918 war Blackburne became a major supplier of engines to motor cycle manufacturers. The following are examples : 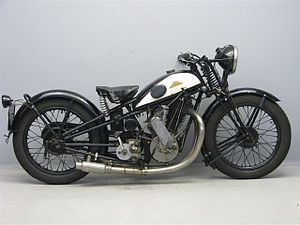 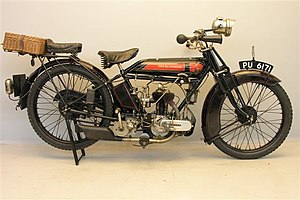 That Blackburne managed to secure so many customers for their engine in a few years after the war is a tribute to how well the engine was regarded, not least because of its excellent competition performance. The number of companies reflects the huge demand for motorcycles, although many of the companies survived only until the great depression of 1929/1930. However, in their 1932 engine catalogue Blackburne stated they were "exporting engines in large numbers to France, Belgium, Germany, Sweden, Italy, Japan, etc where they are fitted by some of the largest and best known manufacturers of quality machines".

Blackburne engines were favoured by several manufacturers for the TT races from 1920, competing mainly against J.A.P. engined rivals in the lightweight (250cc) class, and against A.J.S. engines in the Junior (350cc) class. In the 1920 Junior TT Blackburne bikes came 2nd and 3rd. In the 1922 Lightweight TT Blackburne-engined bikes were second (Rex-Acme), fourth (Sheffield-Henderson), seventh (OK-Supreme) and ninth (Coulson), and in the Junior TT they were third (Sheffield-Henderson), fourth (Coulson), fifth (Cotton), eighth (Edmund) and ninth (Blackburne).[13] Stanley Woods on the Blackburne-engined Cotton won the 1923 Junior TT.

In 1923 Burney Baldwin & Co Ltd started making Burney motorcycles. The motorcycle was exhibited at the 1923 Olympia show, and the Vintage Motor Cycle Club library holds a copy of their promotional literature. This states that the engine was designed by "E.A. Burney, M.I.A.E., who is well-known as the designer of the original Blackburne Motor Cycles and engines". The 495cc engines were manufactured at the works of John Warrick & Co Ltd of Reading, Berkshire, though they are reported to have moved to Twyford and then to Shalford[15]. The Baldwin part of the partnership was Owen M. Baldwin, who was a successful motorcycle racer at Brooklands (on a Matchless in 1922, and a Zenith-JAP in 1928), he also took the motorcycle land-speed record in 1925 on a Zenith-JAP at 124.62 mph.

The Burney engine was a side-valve of 81mm bore and 96mm stroke, with an external 11 inch flywheel. Transmission was by a three speed Sturmey-Archer countershaft gearbox with kick starter. It had a hand controlled clutch, and all chain transmission. It had aluminium guards over the front and rear chain and an aluminium silencer. 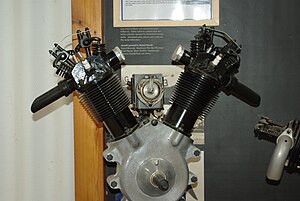 Around 1922, Blackburne first ran the Tomtit two-cylinder light aircraft engine based on the Lympne 696 cc V-twin. 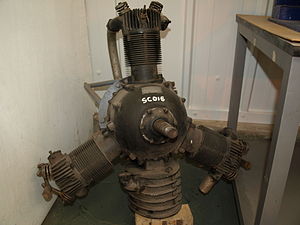 In 1924 the company produced the Blackburne Thrush a three-cylinder light aircraft engine. The first engine design was of 1098 cc, consistent with the capacity limit imposed for the 1924 light aeroplane trials at Lympne. The engine was enlarged and improved during 1925 to 1494 cc for further air trials held during 1926. In late 1925 the engine passed the severe Air Ministry 100 hours operational test.[15] There are two known surviving engines, one of 1100 cc and the other the 1500 cc unit at the Shuttleworth museum at Old Warden, although there may be others.

The De Havilland DH53 Humming Bird was a 1923 ultra-light plane, the first two initially powered by Douglas engines, but they changed to Blackburne engines to get improved reliability [16]. The last two made were involved in experiments to launch and recover them from the R33 airship.