For other places known as Boulogne, see Boulogne (disambiguation).
Subprefecture and commune in Île-de-France, France

Boulogne-Billancourt is the most populous suburb of Paris and one of the most densely populated municipalities in Europe.[citation needed] Formerly an important industrial site, it has successfully reconverted into business services and is now home to major communication companies headquartered in the Val de Seine business district.

The original name of the commune was Boulogne-sur-Seine (meaning "Boulogne upon Seine").

In 1924, Boulogne-sur-Seine was officially renamed Boulogne-Billancourt to reflect the development of the industrial neighbourhood of annexed in 1860 (see history section below).

As for the name Billancourt, it was recorded for the first time in 1150 as Bullencort, sometimes also spelled Bollencort. It comes from Medieval Latin cortem, accusative of cors, meaning "enclosure", "estate", suffixed to the Germanic patronym Buolo (meaning "friend, brother, kinsman"), thus having the meaning of "estate of Buolo".

On 1 January 1860, the city of Paris was enlarged by annexing neighbouring communes. On that occasion, the communes of Auteuil and Passy were disbanded and divided between Boulogne-Billancourt (then called Boulogne-sur-Seine) and the city of Paris. Boulogne-sur-Seine received a small part of the territory of Passy, and about half of the territory of Auteuil (including the area of Billancourt, which belonged to the disbanded commune of Auteuil).

Some of the shooting events of the 1900 Summer Olympics took place in Boulogne-Billancourt.[3]

Boulogne-Billancourt is known for being the birthplace of three major French industries. It was the location, in 1906 for the very first aircraft factory, that of Appareils d'Aviation Les Freres Voisin,[4] which was then followed by those of many other aviation pioneers, and the tradition continues with several aviation related companies still operating in the area. The automobile industry had a large presence with Renault on Île Seguin, and Salmson building both cars and aircraft engines. Finally, the French film industry started here and, from 1922 to 1992 it was the home of the Billancourt Studios, and since becoming a major location for French film production. It was used as the setting of the TV show Code Lyoko. 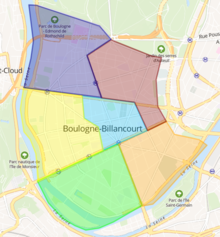 With the city of Sèvres, Boulogne-Billancourt is part of the communauté d'agglomération Val de Seine.

Boulogne-Billancourt hosts the global headquarters of several multinational companies, including:

Prior to 2000 Schneider Electric's head office was in Boulogne-Billancourt.[11]

The public collèges (middle schools) in the commune include Jacqueline-Auriol, Bartholdi, Paul-Landowski, and Jean-Renoir. The public high schools are the Lycée Jacques-Prévert and the .[12] Prior to the September 1968 opening of Prévert, the first high school/sixth-form in Boulogne, an annex of Lycée La Fontaine served the city.[13]

The private school Groupe Scolaire Maïmonide Rambam covers maternelle through lycée. There is also the private high school Notre-Dame. The latter's performance and ranking in Boulogne-Billancourt are given by its success of baccalaureate rate in different series. According to the ranking of L'Express in 2015, the national rank of Notre-Dame de Boulogne was 170 out of 2301 and 7 out of 52 at department level. The private schools Dupanloup and Saint-Joseph-du-Parchamp serve maternelle through collège. Private maternelle and élémentaire schools include Saint-Alexandre and Saint-François d’Assise. Jardin de Solférino and La Maison de l'Enfant are private maternelles.[14]

The Association Eveil Japon (エベイユ学園 Ebeiyu Gakuen), a supplementary Japanese education program, is located in Boulogne-Billancourt.[15] A campus of the École supérieure des sciences commerciales d'Angers is also located in the city.

Boulogne-Billancourt was the birthplace of:

Boulogne-Billancourt is twinned with:[16]