The Cadillac V series is a line of high-performance vehicles tuned by the General Motors Performance Division for the Cadillac division of General Motors. Models in the V series include the CTS-V coupe, sedan and wagon. Cadillac reportedly has no plans to create V-series versions of its crossovers, the , XT4, XT5 and XT6. However, multiple reports have stated that Cadillac's largest SUV, the Escalade, may receive a "V" variant for the new fifth generation, due in 2021.

Most V-series Cadillacs feature high-performance V8 engines mated to manual six-speed transmissions or automatic transmissions in the STS-V, XLR-V ATS-V and 2009+CTS-V, top-of-the-line Brembo brakes and revised suspension systems, revised interiors and special V-series bodywork which is intended to improve vehicle performance as well as differentiate them from their normal production counterparts.

In addition to the Corvette and Camaro, the V designation draws comparisons to other high-performance models by GM such as the Super Sport series, Chrysler's SRT, and Ford SVT line of high-performance vehicles.

In 2009, the second-generation CTS-V sedan achieved a lap time of 7:59.32 at the Nürburgring Nordschleife, which was the fastest documented time for a production sedan on factory tires[1]—until the Porsche Panamera Turbo clocked a time of 7:56 in July 2009[2]—thanks to a heavily-tuned "LS9" EATON-supercharged 6.2-liter (380 in3) V8 engine that was borrowed from Corvette. The engine was renamed as "LSA" and it produces 556 horsepower as well 551 pound-feet (747 N⋅m) of torque. The same "LSA" engine is used in CTS-V coupe and wagon. The CTS-V is the only V-series Cadillac for the 2014 model lineup, and it was originally created to compete with BMW M3 sedan and coupe, as well the M5. Future plans for the V series include a new ATS-V sedan[3] and coupe[4] along with a third-generation CTS-V sedan.[5] 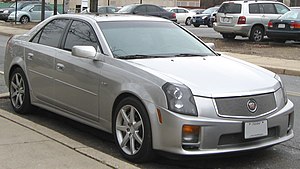 The first V-series model of the Cadillac family was the CTS, which was built on GM Sigma Platform like the core model. Since a V8 engine was used, it required a unique engine cradle distinct from the base CTS V6. Larger anti-roll bars and larger shocks were also added. The spring rate was significantly increased. Right at front above the ground, GM LS engine V8 from the C5-generation Corvette Z06 was fitted and coupled—also from the C5 Z06—with a six-speed Tremec manual transmission.

XLR hard-top was the second Cadillac to join the V series. It was an ultra-luxury segment car, first introduced in 2005 and it shared platform with Chevrolet Corvette (C6). The XLR-V used a supercharged Northstar engine series. For the XLR-V, the engine was certified by the SAE to produce 443 hp (330 kW) and 414 lb·ft (561 N·m). The supercharger and four intercoolers were built into the intake manifold. A six-speed automatic transmission, larger brakes from the Z51 Corvette, and 19-inch wheels were used. The XLR base price was $98,000 and by 2008 it reached $101,300 making it one of General Motors' most expensive vehicles of all time.

A year after XLR-V launch and two after CTS-V, in 2006, Cadillac started producing STS-V sedan that also featured the famous Northstar V8 engine from XLR-V. However, the supercharged 4.4-liter (270 in3) Northstar V8 in STS-V had 26 more horsepower and 25 more lb-ft of torque than XLR-V's. The engine was mated to a driver-adjustable transmission with two shifting modes, larger brakes by Brembo, larger ten-spoke alloy wheels (18 in × 8.5" front, 19 in × 9.5" rear), Pirelli run-flat tires, a faster steering ratio, and a stiffer suspension than the standard STS.

The second-generation V series was exclusive to the CTS since STS and XLR were rolled out of production. For 2009, Cadillac introduced the second-generation CTS-V that was built on GM Sigma II Platform. It was a rear-wheel drive, powered by a 6.2-liter (380 in3) LSA EATON-supercharged V8 that was based on LS9 V8 from—what was then—recently released Corvette ZR1. The engine generates 556 horsepower and 551 lb-ft of torque. The second-generation CTS-V was a major hit that advanced Cadillac's "Art & Science" philosophy further ahead. It broke a Nürburgring lap-record which made it—back then—the fastest production sedan.[citation needed]

When asked in 2009 about the possibility of a CTS-V wagon, the GM Vice Chairman at that time, Bob Lutz, replied, "... should sufficient demand materialize, there is no reason why we couldn't do a V-series wagon, and I would be standing in line for one, just ahead of you." GM decided to move forward, introducing a 5-door sport wagon body style to the CTS-V vehicle line at the New York International Auto Show on March 29, 2010.

The CTS-V coupe debuted at the 2010 North American International Auto Show in Detroit, and entered production in summer 2010 as a 2011 model. It has the same 556 hp (415 kW) engine and transmission choices as the CTS-V sedan. The CTS-V Coupe features unique centered twin exhausts, a larger grille for air intake, and an optional "saffron" interior trim color. Like the CTS-V sedan, it comes standard with 19-inch aluminum wheels, Brembo brakes, and Magnetic Ride Control. 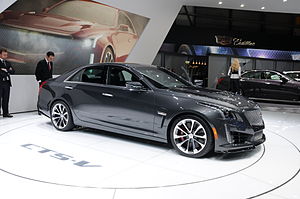 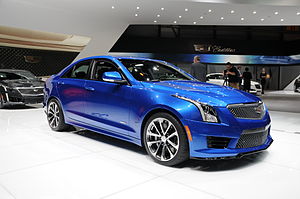 The third generation CTS-V includes a 6.2 litre 640 hp LT4 supercharged gasoline V8 engine, as the most powerful Cadillac ever produced to date. The third generation CTS-V is sometimes referred to as a four-door Corvette, because of its supercharged V8 from the Corvette C7 Z06 and a top speed of 200 miles per hour. It weighs 4145 pounds. The new 2016 Cadillac CTS-V model equipped with an 8-speed automatic transmission has been street tested with a best 0-60 MPH test time of 3.6 seconds.[20]

Starting with XTS, the marque offers a step trim, called Vsport. The Vsport trim is the top of the XTS line, with a 3.6-litre (220 in3) turbocharged engine, producing 410 horsepower (310 kW). The next year,[when?] the third generation CTS was started to being offered with a Vsport trimline, however with an increased output of 420 horsepower (310 kW). Both of them were the only "V"-badged vehicles of Cadillac until announcement of CTS-V and ATS-V.

The V-Sport trim designation was discontinued with the CTS and XTS sedan phase-outs in 2019 and 2020, respectively.

The Cadillac ATS-V is intended to compete against BMW M4/BMW M3 and Audi RS4. The ATS-V is the first V6-engined V series of Cadillac ever, with a LF4 engine that produces 464 hp and 445 lb ft. The ATS-V was discontinued with the ATS line in 2019.

The fourth generation V series was the first to incorporate Cadillac's new "Escala" design language with the all-new Cadillac CT6-V in 2020. This began a new era for the V series, in that none of the three all-new V series sedans, the CT6-V, the CT5-V, nor the CT4-V, were available with a pushrod General Motors small-block V8 engine. The CT6-V made use of Cadillac's all-new Blackwing V8, while the CT5-V used GM's 3-liter twin-turbo LGY V6, and the CT4-V a 2.7 liter turbo inline 4-cylinder engine. This generation also marked the beginning of a new V series trim strategy, where the "V" trims would become the entry-level performance variants (a position previously held by the V-Sport trim level), and a new, higher V series trim would mark the high-power, hard-core performance variant, previously denoted by the straight "V." The higher-output CT5-V and CT4-V variants have been rumored to come equipped with the LT4 supercharged V8 and 3.6 High-Feature twin-turbo V6, respectively, and both will offer automatic and manual transmissions.