The Caesars Palace Grand Prix was a car race held in Las Vegas between 1981 and 1984. For the first two years, the race was part of the Formula One World Championship, before becoming a round of the CART series in 1983. Nissan/Datsun was a presenting sponsor of both races.[1] 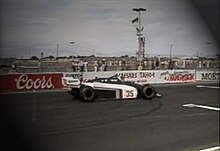 There had been Can-Am races at the Stardust International Raceway in the mid to late 1960s, but that circuit was bought by developers and then demolished in 1970. The first race was originally supposed to take place as the last race of the 1980 season on November 2, 4 weeks after the US Grand Prix at Watkins Glen. But when Watkins Glen went off the schedule after 1980, the Caesars' Palace Grand Prix gained importance, and more effort was put forth by Bernie Ecclestone and others to make sure this Las Vegas race went ahead. The new race ended the year, whereas Long Beach, only 300 miles away started it; but unlike Long Beach, Las Vegas was not popular among the drivers[who?], primarily because of the flat, repetitive nature of the circuit, its parking lot location and Las Vegas itself. It has also been described as one of the worst circuits Formula One has ever visited.[2] The track was laid out in the parking lot of the Caesars Palace hotel and was surprisingly[clarification needed] well set up for a temporary circuit: wide enough for overtaking, it provided ample run-off areas filled with sand, and had a surface that was as smooth as glass. Its counter-clockwise direction, however, put a tremendous strain on the drivers' necks. When Nelson Piquet clinched his first World Championship by finishing fifth in 1981, it took him fifteen minutes to recover from heat exhaustion after barely making it to the finish. The 1982 race, held in intense heat- another unpleasant feature of this race was won by Michele Alboreto in a Tyrrell, but that was the end of Formula One racing in Las Vegas since the races had drawn only tiny crowds and the 1981 race turned out to be a huge loss for the hotel.

Following the withdrawal of Formula One, the event was assumed by CART for 1983 and 1984. The circuit was modified with turns 1, 6, and 10 connected in a continuous straight, producing a flat 1.125-mile distorted oval. The two races were contested over 178 laps, a distance of 200.250 miles.[3][4][5] For the 1984 running, the exit of the final corner was widened, increasing lap speeds by around 7 mph from the previous year.[6][unreliable source?] Following the 1984 race, the circuit disappeared from the calendar, with the location now covered with urban development (namely, The Forum and The Mirage).

There have been speculative rumours of a return of a Las Vegas Grand Prix to the F1 calendar. In fact, the 1995 Indianapolis 500 program advertised a possible street circuit along The Strip, but it never materialized. After the 2005 U.S. Grand Prix at Indianapolis, rumors again circulated, however, it is one of many circuits linked with future races, and a strict limit on the number of races in a year means Las Vegas is not a favourite for a race. A number of years later, the American media firm Liberty Media bought the commercial rights for Formula One, and have stated their intention to have a street race in Las Vegas, located primarily on the Las Vegas Blvd. strip.

A pink background indicates an event which was not part of the Formula One World Championship.