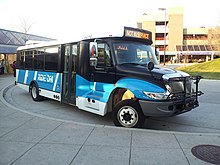 Champion Bus is a bus manufacturer owned by Forest River of Elkhart, Indiana, United States. It was formerly owned by Thor Industries of Imlay City, Michigan, United States. ASV purchased it from Thor in August 2013.[1]

Buses made under the Champion name include:

In May 2020, REV Group sold its shuttle bus business to Forest River.[3]