For other uses, see Chang'an (disambiguation).

Chang'an Automobile (Group) Co., Ltd.[1] is a Chinese automobile manufacturer headquartered in Chongqing, China, and a state-owned enterprise.[2] Its principal activity is the production of passenger cars, microvans, commercial vans and light trucks.[3]

Chang'an is considered to be one of the "Big Four" Chinese automakers (along with SAIC Motor, FAW Group, and Dongfeng Motor Corporation),[4] and manufacture of 3 million units in 2016 saw the company rank fourth among China's automakers by production volume.[5] It is China's second most popular car brand, with 1.4 million Changan cars sold in 2016.[6] A subsidiary of Changan, Chongqing Changan Automobile Company (SZSE: 000625), is listed on the Shenzhen Stock Exchange (but is also state controlled).[2]

Changan's early origins can be traced back to 1862 when Li Hongzhang set up a military supply factory, the Shanghai Foreign Gun Bureau.[7] In 1937, during the Sino-Japanese War, the factory was moved to Chongqing when Shanghai was attacked.[8]

In 1959 a predecessor entity, Chongqing Chang'an Arsenal, under contract to the government, began auto manufacturing and built Changjiang Type 46 vehicle which was the first production vehicle of China.[9] Changan introduced minicar by licensing from Suzuki.[10]

In 2009, Changan acquired two smaller domestic automakers, Hafei and Changhe.[11] In 2013, Changhe was transferred to Jiangxi provincial government for restructuring, and later became a majority-owned subsidiary of another Chinese automaker BAIC Group.[12]

As of 2010, China Weaponry Equipment is the parent company of this state-owned automaker,[13] and that year Chang'an became the fourth most-productive car manufacturer in the Chinese automobile industry by selling 2.38 million units.[14]

The company also released a new logo for its consumer offerings in 2010 while commercial production retains the former red-arch brand.[3]

Although it only allowed the company to achieve fourth place among domestic automakers in terms of production, Changan made over 2 million whole vehicles in 2011.[15]

In 2012, it was reported that 72% of production was dedicated to passenger vehicles,[5] but this count likely conflates private offerings and microvans, tiny commercial trucks and vans that are popular in China.

Changan will end sales of gasoline and diesel vehicles under its brand in 2025.[17]

After six years of R&D, Changan debuted a hybrid automobile in 2007.[2] China subsidizes oil, an incentive for the use and manufacture of electric cars, and Chinese automakers see opportunities in less mature electric vehicles because Western companies have yet to develop much of a lead in the technology.[21]

An existing R&D center in Beijing[23] will soon be joined by a passenger car production base in Fangshan District, Beijing, which will become operational in 2012.[citation needed]

An industrial park in Hebei province may continue to be Chang'an controlled.[citation needed]

A Harbin, Heilongjiang province, R&D center, is now a Chang'an asset.[23] It may have been owned by Hafei prior.

A Chang'an-Ford plant and an industrial park[citation needed] in Nanjing, Jiangsu province, may comprise Chang'an operations in this province.

A planned Chang'an commercial vehicle production base in Nanchang, capital of Jiangxi province, will produce JMC and Ford-branded vehicles[24] and join an R&D center[23] as a second facility in this province. The latter facility may be a former Changhe asset.

Chang'an has an R&D center in this coastal city.[23]

The company maintains four factories in international markets and several overseas R&D centers. Chang'an had an assembly plant in Poteau, Oklahoma, piecing together products sold under the Tiger Truck brand from 2007 to 2010.[25] The Changan CS35 is built in Lipetsk region of Russia since 2016.[26]

Changan has built a production facility in Karachi Pakistan with an investment of US$100 million. This plant will make right hand drive passenger vehicles for Pakistan as well other right hand drive markets. First Made in Pakistan unit of Changan rolled out on 2 May 2019. With a manufacturing capacity of 30,000 cars per year this facility will be Changan's first to produce right hand drive cars.

Chang'an has over 7,000 engineers and researcher working in R&D facilities in Chongqing, Beijing, Shanghai and Harbin,[7] Turin, Italy,[23] and Yokohama, Japan.[23] It set up two more in 2011. These are located in Birmingham (originally was set up in Nottingham), United Kingdom, and Detroit, United States.[27] The Detroit center opened in early 2011, and its office was moved from Nottingham to Birmingham 2015.[28][29]

In April 2019, it was announced that JMCG and Changan planned to split JMH into two separate companies: one keeping the same name and other tentatively called Jiangling Investment. Jiangling Investment would hold the 41.03% JMC stake and some liabilities and would still be equally owned by Changan and JMCG. The new JMH would own the rest of the former JMH assets (including Landwind)[37][38] and it would issue 100% more shares to be sold to investors, leaving JMCG and Changan with a 25% stake each.[38] Jiangling Investment was formally established in May 2019, completing the split of the former JMH.[39] In June 2019, it was announced that the investor for the new JMH was the car manufacturer Aiways. Aiways acquired a 50% of the new JMH with the aim of securing production permits for new energy vehicles.[40][41] 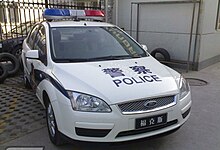 Making Chinese-market versions of Ford consumer offerings,[3] its 2010 dealer network was thought to include many showrooms in second- and third-tier Chinese cities[citation needed] such as Chongqing.[43] So-called second- and third-tier cities are large and medium-sized cities not among the top four in terms of population and contribution to GDP.[44]

Changan and the French car manufacturer PSA Peugeot Citroën agreed in 2010 to set up a 50/50 passenger car and light commercial vehicle-making joint venture.[45] Named CAPSA, it is the PSA Group's second joint venture company in China, after Dongfeng Peugeot-Citroën Automobile, and its first with Chang'an.[46] Centering on a newly built production base in Shenzhen, it is estimated that initial production capacity for the project will be 200,000 units/year.[47]

Manufacturing commenced in 2014, with China specific Citroën DS models; the DS 5LS first and then the DS 6WR.[48]

In parallel with its Suzuki joint venture, Changan also continued to build small trucks and vans for commercial use based on the 1999 Suzuki Carry license, but independently developed vehicles are quickly replacing them.[50] These small cars carry the Changan brand name although Suzuki technology is used in their design and manufacture.

In 2010, Changan was supposed to merge its Suzuki joint venture with that of Changhe, another automaker that participates in a project with the Japanese company.[13] This plan, supported by Suzuki, did not see fruition, and this Japanese company may currently be unhappy with its Chinese partners. Despite being an early entrant in the Chinese auto market, it has lackluster sales in the country.[51] Suzuki's efforts to change the situation by merging its two joint ventures—since Chinese business law does not allow any foreign company more than two—have so far been stymied by its Chinese partners, who instead hope Suzuki will improve their situation.[52] The Chinese State may also not want new foreign-Chinese joint auto-making ventures at this time.[53] An effort to sell the entire Suzuki model range at unified dealerships fell through in 2008.[54] (This may have been tried again in 2010.)[55]