Not to be confused with Ford Durango.

The Dodge Durango is a full-size sport utility vehicle (SUV) produced by Dodge. The first two generations were very similar in that both were based on the Dodge Dakota, both featured a body-on-frame construction and both were produced at the Newark Assembly Plant in Newark, Delaware.

The third-generation Durango is built on the same platform as the Jeep Grand Cherokee, features unibody construction, and has been assembled at the Jefferson North Assembly Plant in Detroit, Michigan, since late 2010.

The Durango was marketed as a sturdy truck-based SUV designed to hold up to seven passengers and tow up to 7,500 lb (3,400 kg) when properly equipped.[2] The Durango shared a front end, instrument panel, and front seats with the Dakota pickup on which it was based. Original designs of the eight-passenger Durango featured a rear-facing third row similar to many older station wagons. To make room for a more practical forward-facing third row, Dodge shortened the length of the front doors and raised the roof two inches (5 cm) beyond the front seats, allowing for stadium seating. The Durango's roof rack was designed to mask the appearance of the raised roof.[3] 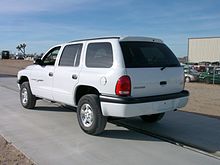 For 1999, the Durango was made available with two-wheel drive. A 3.9 L Magnum V6 engine was available, but few were sold. Minor changes were made for the second year, two new paint colors and notable options available including 6-by-9-inch (150 mm × 230 mm) heated rear view mirrors and steering wheel-mounted radio controls. Leather seats became standard on SLT Plus models, and body-color wheel flares became standard on SLT Plus and four-wheel drive models.

The 2000 model year included a new 4.7 L Magnum V8 engine, which replaced the reliable 5.2 L Magnum V8, as the standard engine for four-wheel drive models. The 3.9 L Magnum V6 engine was no longer available, leaving only V8s for the rest of the production run. The high-performance Durango R/T came equipped with a performance-tuned 5.9 L Magnum V8 and all-wheel drive.

For 2001, Dodge focused on interior upgrades as Durango's interior trim panels, dash-mounted controls, instrument panel, overhead console, and steering wheel were all redesigned. The transfer case selector on 4X4 models changed from a manual lever on the console to a switch on the dash. The instrument cluster was updated, and an electronic vehicle information center was incorporated into the overhead console. For improved rear passenger comfort, a dual-zone climate-control system was added as standard equipment. Sound systems were improved on all models and now came standard with six speakers. Other minor changes include: door panels, revised seats, aluminium wheels, and minor changes to trim options.

In 2002, the new SXT version of the Durango was offered as the entry-level trim package. Optional side curtain airbags were added for safety. The 2003 Durango featured minor mechanical changes, most notable was the addition of four-wheel disc brakes. 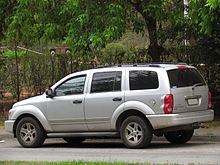 The second-generation Durango was first shown as a concept dubbed Dodge Durango R/T concept at the 2003 Detroit Auto Show. It debuted shortly before the companion Dakota. Like the Dakota, it has much in common with the large Dodge Ram pickup, including a fully boxed frame. It is 7 in (180 mm) longer, 2 in (51 mm) wider, and 3 in (76 mm) taller than the previous model. It also offered a third-row bench with three seats, giving it an eight-seat capacity. The design took its styling primarily from the Dodge Powerbox concept, which was itself based on the 1999 Dodge Power Wagon concept, and the 2003-2004 Durango R/T concept.

Debuting for 2004 was a new coil-spring rear suspension for the solid rear axle. A Watt's linkage system is fitted to the rear axle, centering the axle and reducing rear-end skate over rough surfaces, and allowing a lower and wider cargo floor.

The 2004 Dodge Durango was the first SUV in DaimlerChrysler's lineup to introduce the 5.7 L HEMI V8 engine, as well as a new radio design and modernized interior features.

The 2007 model year featured a facelift that debuted at the in April 2006. It featured a redesigned grille, hood, headlamps, fenders, and wheels. New features included electronic stability control, a tire pressure-monitoring system, rear park assist, and a one-touch turn signal.

In 2006, DaimlerChrysler introduced a full-size[4] luxury SUV based on the Durango, called the Chrysler Aspen, for the 2007 model year.

"Chrysler Aspen" redirects here. It is not to be confused with Dodge Aspen.

The Chrysler Aspen is a luxury SUV from Chrysler. Launched for the 2007 model year, the Aspen was based on the Dodge Durango SUV.

The Aspen was the first truck-based SUV commercialized under the Chrysler brand, although the PT Cruiser was the first truck-based Chrysler brand vehicle as classified under Corporate Average Fuel Economy's (CAFE) regulation. With this introduction, as of 2007, all American automobile brands had an SUV in their range.[5][unreliable source?] The truck was unveiled at the 2005 North American International Auto Show. The Aspen came equipped with three rows of seating for eight passengers and available all-wheel drive.[6] It was available in only one trim, Limited.

Due to slow sales, it was discontinued after the 2009 model year. However, the Dodge Durango Citadel covers the mid-size luxury SUV segment as of 2011.

In October 2008, Chrysler announced that the shutdown of the Newark Assembly facility, which produced the Durango and the Chrysler Aspen, would be moved up to the end of 2008, thereby ending production of the Aspen and Durango after the 2009 model year.[7][8] Production ceased on December 19, 2008.

After announcing the discontinuation of the Durango after the 2009 model year, Dodge released an Internet site and teaser photos of the third-generation Dodge Durango on August 16, 2010.

The 2011 Dodge Durango entered production on December 14, 2010,[1] alongside the second-generation Charger in the 2011 vehicle lineup. It went on sale for general dealership availability in mid-January 2011.

The Dodge Durango is available in several distinct trim levels:

A Special Service Package has also been available since 2012, and is sold exclusively to government fleets. It is based on the base Durango SXT trim level, but does offer the 5.7L HEMI V8 engine that the public-market SXT trim level does not offer. 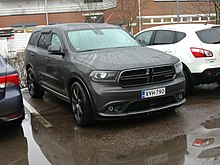 Refreshed headlights and grille for 2014

The back of a post-facelift Dodge Durango.

Dodge unveiled its revised 2014 model Durango at the 2013 New York International Auto Show. The 2014 Durango was redesigned with sportier-looking lines, an eight-speed automatic transmission, and a new design trim similar to the Rallye, with blackened plastic bumper and outline. The tail lights were reworked to feature a single LED 'Racetrack' tail lamp similar to the Charger and Dart. On the inside, Dodge added a revised steering wheel, instrument cluster, rotary shift knob, and a reconfigurable 7-in (780mm) thin film transistor display first seen on the Dart.

For 2016 the Durango received the new Pentastar Upgrade V6 which adds Stop/Start, Variable Valve Lift and better drivability through a 15% enhanced torque curve and increasing the Variable Valve Timing from 50 degrees to 70 degrees. Other technologies include Cooled EGR and friction reduction. Despite the added tech, the engine weighs 4 lbs less. Power output remains the same at 293HP/260 ft/lbs torque (single exhaust) and 295HP/260 ft/lbs torque (dual exhaust). The Durango also added new packages to their two trims, with the Anodized Platinum package for the Citadel trim and the Brass Monkey package for the Limited trim.[11]

For 2017, the Dodge Durango Limited trim is discontinued and replaced by the new GT trim and the Base SXT trim level will now be available with three row seating fitting 7 passengers.[12]

For 2018, All models received the new Uconnect radios and the 3rd Generation ZF 8 speed automatic transmission. The rotary transmission gear shifter has been replaced with a T-grip handle like in the Dodge Charger. The steering wheel has also been changed to a more sporty wheel like found in the Dodge Charger. Other changes include suede insert leather seats and black chrome inserts in the interior on the GT model.

For 2019: The Tow Group IV package gets an integrated trailer brake controller. The Dodge Durango GT trim gets the R/T- and SRT-style grille. A new GT Plus trim is added which adds several amenities to the GT trim, such as heated front and second row seats and steering wheel; 6-way passenger power seat with 4-way lumbar adjustment; two-position memory for the driver's seat, radio, and mirrors; power lift gate; and 150W inverter.[13]

For 2021, the Durango receives updated exterior styling, with a revised bumper and headlights, three grille textures and six new wheel designs. The interior features a new instrument panel with Uconnect 5; an 8.4-inch screen is standard on SXT and GT models, while R/T and Citadel models have a 10.1-inch touchscreen. An SRT Hellcat model with a supercharged 6.2L Hemi V8 will also be available for 2021 only, after which it will be discontinued due to emissions requirements.[14]

On July 24, 2015, Chrysler recalled all 2014-2015 Dodge Durangos with the 8.4-inch (210 mm) touch-screens due to security concerns with the software that controls the vehicle because it could be hacked. The vulnerability was discovered by software engineers Charlie Miller and Chris Valasek and initially posted on Wired. This vulnerability would allow hackers to remotely access and take over a variety of features, including those key parts of driving via a vulnerability in the Uconnect infotainment system.[19][20]

On November 26, 2019, Chrysler issued a recall of 700,000 2011-2013 Durangos and Jeep Grand Cherokees in the United States, Canada, and Mexico, because of an electrical failure which can cause the motor refuse to start or stop functioning while it is driving. There are no reports of accidents. The FCA group announced a free revision to both models and replacement of these pieces involved in the problem.[21]