The Circuito Internacional de Vila Real is a 4.785 km (2.973 mi) temporary street circuit in Vila Real, Portugal. This circuit was used for car and moto races. 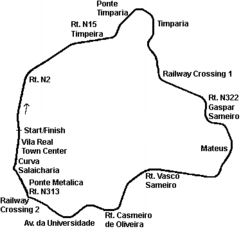 After a deadly accident in 1991, no race would take place in this circuit until 2007, after a length reduction to a 4.785 km (2.973 mi) long renovated layout. From the original circuit, remains the up and downhill section, from turn 6 (Boque), until turn 19, that drivers used to turn left. This section also gives the track big elevation changes.[2]

It's considered one of the most challenging tracks, due to its corners, high speed and drivers being very close to the barriers.[3]

The official race lap records at the Circuito Internacional de Vila Real are listed as: