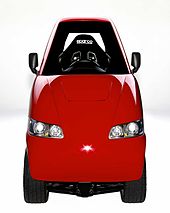 The Commuter Cars Tango is a series of prototype ultra-narrow electric sports car designed and built by Commuter Cars of Spokane, Washington.

Commuter Cars was founded in Spokane, Washington by Rick Woodbury and his son Bryan Woodbury in 1998.[1] Woodbury says his father came up with the original idea some time in the early 1980s.[2] Woodbury learned that 106 million U.S. commuters were driving to work alone. He decided to produce a single occupant fast electric car. Starting in the 1980s, Woodbury started researching hydrogen power leading to fuel cells. The weight of fuel cells led to the idea of a stable, narrow vehicle with a low center of gravity. While waiting for fuel cell technology to catch up,[3] he eventually settled on a design for the car to have individual small electric motors for each wheel. In his spare time, he worked on building his first car. In 1998, he sold his yacht to fund the company.[4] He eventually settled on a plan to use parts that were already produced, instead of producing every part for the Commuter Cars. Commuter Cars uses various assemblies manufactured for other, more common cars.[5] Among those assemblies is a safety cage made to NASCAR specifications.[6]

Production of the first of their line of ultra-narrow electric sports cars began,[when?][citation needed] the Tango T600. The company designed a small ( 69 in. long and 29 in. wide) electric cars.[7] Commuter Cars said production of the first version, at a rate of about 100 cars per year, was set to begin in late 2005.[needs update] Actor George Clooney took delivery of the first Tango kit on August 9, 2005, which was a major milestone for the company. Clooney appeared in the press with the car, explaining and promoting it.[7] Difficulties with their UK manufacturer forced Commuter Cars to take over manufacturing themselves; for this reason the second vehicle did not ship until February 11, 2008, and was completely assembled in Spokane, Washington. The second car eventually found its way into the second-floor office of Google CEO Eric Schmidt as part of an April Fools' Day joke.[8]

By 2008 Commuter Cars had only produced 10 cars which sold for an average of $121,000 each.[4] The first production car was sold to actor George Clooney who took delivery on August 9, 2005.[7] The company generated a significant amount of media interest with the sale to Clooney. However, that initial media attention did not lead to a production deal.[9]

In 2010, the company entered the Progressive Insurance Automotive X Prize in the "Alternative" category. The vehicle entered was a Tango T600 owned by Google founder Sergey Brin, borrowed back for the competition. After passing many of the performance tests with ease, the car failed to complete the 100 mile durability run (one of the complicated set of requirements for the prize) and was eliminated from the competition.[6] The company did not get a production deal with a manufacturer, and by 2014, fewer than 20 cars had been built in the United States.[9]

Throughout the company's history, Commuter Cars has had limited financial resources. When the company did generate a small profit, they reinvested the money in research and production capacity for their future vehicles.[10] When the company had sufficient funding during 2007, it employed eight workers and was able to manufacture one car each month.[6]

The Tango is thinner than some motorcycles and may be small enough to legally ride side-by-side with other small vehicles in traffic lanes in some jurisdictions. Capable of seating two passengers in a tandem seating arrangement, it only takes up one-quarter of a standard parking space and is able to park sideways in many cases. One prototype vehicle has been produced by the company and was shipped to Prodrive in the United Kingdom in January 2005, where the design was refined for production models.

Commuter Cars says the Tango's heavy battery pack and low ground-clearance combine to give it a center-of-mass 11 in (280 mm) from the ground, allowing for stable handling. About two-thirds of the 3,000 lb (1,400 kg) curb weight in the prototype is taken up by the batteries, twin motors, and controller, mounted low in the frame. Commuter Cars says production models are expected to weigh less, ranging from 2,200 to 2,500 lb (1,000 to 1,130 kg).[why?] Propulsion is provided by two electric motors. To extend its range, an optional generator cart can be attached to the Tango.[12]