In 1905, Continental Motors was born with the introduction of a four-cylinder, four stroke cycle L-head engine operated by a single camshaft. 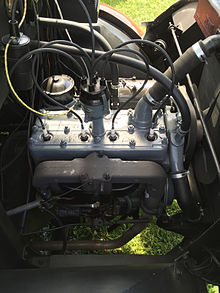 A Continental engine in a 1948 Divco delivery truck

Continental Motors entered into the production of automobiles rather indirectly. Continental was the producer of automobile engines for numerous independent automobile companies in the 1910s, 1920s, and 1930s, including Durant Motors Corporation which used the engines in its Star, Durant, Flint and Rugby model lines. Following the 1931 collapse of Durant, a group having interest in Durant Motors began assembling their own cars, the De Vaux-Hall Motors Company, using the Durant body dies, in Grand Rapids, Michigan, and Oakland, California, and under the De Vaux brand name. When De Vaux-Hall collapsed in 1932, unable to pay creditors, Continental Motors assumed automobile assembly and marketed the vehicles under the Continental-De Vaux brand name for the balance of the 1932 model year.

Continental Motors introduced a completely new line of Continental-branded automobiles for 1933. These cars were not based upon the 1931 De Vaux, a product of the De Vaux-Hall, which had been using body dies left over from the former Durant produced by Durant Motors until 1930.

The 1933 Continentals were marketed in three model ranges: the largest and most expensive was the six-cylinder Ace, next was a smaller six called the Flyer and also the low-priced four-cylinder Beacon. The 1933 Beacon roadster was the lowest price full-size car offered for sale in the United States in the 1930s, costing only $US335.[2] None of these met with success in the depression era economy. At this same time, Dominion Motors Ltd. of Canada was building the same Flyer and Beacon cars under arrangement with Continental for sale in the Canadian market, and importing the larger Ace models. Dominion then converted to building Reo brand trucks. The Ace and Flyer models were discontinued at the close of the 1933 model year. Finding that its cars were unprofitable, Continental stopped assembling even Beacon automobiles in 1934.

Continental was a major manufacturer of horizontally opposed 'flat four' airplane engines and supplied a similar engine for Sherman tanks during World War II. Apparently the US government contracts continued during the Korean War. As the jet engine began to replace piston engine powered airplanes, Continental began losing their military contracts. The jet engine technology thus creating an understandable end to Continental's military prosperity. When Korean War ended, Kaiser Corporation, who used Continental engines in all their vehicles, was able to gain ownership of a Continental engine making factory.* It was during that time of downsizing Continental's operations that many Continental employees dispersed to find jobs elsewhere in the industry -those engineers finding new jobs at other companies like the newly formed American Motors, even Chevrolet.

Kaiser, working with a Continental-designed engine, introduced the USA's first mass-produced OHC inline six-cylinder engine. It debuted in Kaiser-owned Jeep Corporation vehicles in the mid-1960s. However, Stutz built both single and dual overhead cam inline six-cylinder engines in, respectively, the late 1920s and early 1930s (sohc) and the early 1930s (dohc). Moreover, these were fitted in Stutz production cars (though their numbers were comparatively small).[citation needed]

Particular models of John Deere tractors are currently being supplied by Continental since the ownership transfer to Korea, as stated on the tractor's engine identification plate.

Some models used Continental engines for only part of their production lifespan; others used them exclusively.

Continental built many engines for the US military, some by license, and many of unusual type.

Inline: several conventional gasoline I6s were built for trucks, the COA331 (licensed from REO), 6602, 22R, and AO895 (also used in some armored vehicles). Later the M-A-N licensed multifuel LDS427, LD465 and turbocharged LDT465 were developed, also for use in trucks.

Radial: in the late 1930s 7 and 9 cylinder air cooled radial aircraft engines were adapted for use in armored vehicles. The W670 and R975 were considered very reliable by the British in North Africa, but were not developed further.

Opposed: just after WWII an air cooled O6 was developed for armored vehicles. All were supercharged, AOS895-3 models had carburetors, -5 models had fuel injection with no increase in power, but greater fuel mileage.

V type: in the early 1950s an air cooled V12 engine was introduced for armored vehicles. Later the AVSI-1790 was developed into the AVDS-1790 diesel version, which was often retro-fitted to earlier vehicles.