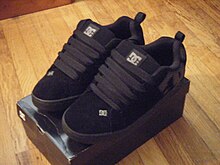 A pair of DC Shoes

DC Shoes is an American company that specializes in footwear for action sports, including skateboarding and snowboarding. The company also manufactures apparel, bags, accessories, hats, shirts, and posters.[1]

The company was founded in June 1994 by Damon Way and Ken Block.[2] It was originally based in Carlsbad, California, but is now based in Huntington Beach, California, United States.[3] DC originally stood for "Droors Clothing", but since the sale of Droors Clothing (which is now defunct), DC no longer has ties to Droors and is simply DC Shoes, Inc.[2]

On March 8, 2004, DC Shoes was acquired by Quiksilver in an US$87 million transaction.[4][5] In 2010, DC Shoes moved from Vista, California, to Quiksilver's headquarters in Huntington Beach.[6] A video entitled Skateboarding Is Forever was released online in 2010 and featured parts from the amateur DC skateboard team at the time: Marquise Henry, Matt Miller, Wes Kremer, Evan Smith, and Greg Myers. Apart from Myers and Henry, all of the skateboarders from the video remained sponsored by the company back in 2013, and have since attained professional status (Myers was arrested following a carjacking incident in October 2012[7]).[8][9]

In 2011, the brand underwent a rejuvenation process that included the design of a new flag logo.[10] As part of this process, new skateboard team announcements were progressively made and a series of advertisements, under the direction of new team member Steve Berra, were released online.[11] The other new team announcements were Mikey Taylor, Mike Mo Capaldi, Nyjah Huston, Chris Cole, and Davis Torgerson.[12][13] Felipe Gustavo was introduced at a later stage.[8][14]

A further progression of the brand relaunch was the "Rediscover" campaign that commenced in December 2011, following the addition of Capaldi and Huston to the skateboard team. The campaign is entitled "Rediscover DC" and the launch signified the first time that the entire DC team had been brought together in nearly a decade.[12][13][15]

The first individual installment of the campaign was entitled "Rediscover Technology" and featured Chris Cole's signature shoe.[16] The subsequent instalments are as follows:

Following the brand relaunch, Taylor was the first new team member to release a signature model, as well as a corresponding full video part,[22] both of which were launched in July 2012.[24] As of August 2012, the DC company had entered the women's market and the "Women's Fall 12 Collection" consisted of footwear, apparel, accessories, soft goods, and accessories.[25]

In the first half of 2013, the promotion of new team members continued as Capaldi ("Mike Mo S"),[26][27] Kremer ("Wes Kremer Pro"),[9][28] and Huston released signature shoe models. On the final night of May 2013, a launch event was held at the Roosevelt Hotel in Los Angeles, California, U.S. for the first signature model skate shoe of Huston's career, with Pete Rock in the role of DJ. The model is named the "Nyjah Huston Signature Shoe" and the promotional advertisement features Huston executing a trick at set of stairs at Hollywood High School in Los Angeles, U.S.[29]

Cyril Jackson, accompanied by the "Baker Council S" shoe model, was introduced as a new amateur team member in mid-August 2013.[30]

Miller's first professional shoe model with the brand was announced on October 6, 2014. Titled the "Matt Miller S," the shoe was released after Miller had been sponsored by DC Shoes for six years.[31] The company's skate team embarked on the "Defy Convention Asia" tour at the start of November 2014.[32]

Tristan Funkhouser and Bobby De Keyzer were added to the global skateboarding team amateur squad on December 19, 2014, through the release of a YouTube welcome video that is just under 10 minutes in duration. The company described both additions as "unique" in the promotional blurb for the "Defunkt" video.[33]

Similar to other larger brands, such as Nike, Inc.[36][37] and Adidas,[38][39][40] DC sponsors regional teams in addition to its global team. Initially, national teams, such as the DC Shoes China team,[41] DC Shoes Spain team,[42][43] DC Shoes Norway,[44] and DC Shoes Australia were formed,[45][46][47] but in 2013 the various skate teams seem to have been merged and united under regional titles. However, as of July 2013,[48] DC Shoes Canada has not been officially disbanded and the team consists of Morgan Smith, Josh Clark, Sascha Daley, Micky Papa, Paul Trep, Will Marshall, Mitch Barrette, Bobby Dekyzer, and Chad Dickson.[49] Additionally, as of September 2013, a UK "National" team exists, and consists of Conhuir Lynn, Dave Snaddon, Sean Smith, Dylan Hughes, and Nicky Howells.[50]

As of September 2013, the DC Shoes Europe team consists of Madars Apse, Josef Skott Jatta, Thaynan Costa, Michael Sommer, Javier Paredes, Bruno Aballay, Antony Lopez, Ruben Garcia, and Manuel Margreiter.[51][52] In late 2012, an Asia Pacific (DC APAC) team superseded the Australian team and will presumably incorporate skateboarders from the Chinese team, such as Taiwan pro Adee Lu, as well as other parts of the Asia-Pacific region. Tommy Fynn was introduced as the first member of DC's APAC skate team,[53] followed by fellow Australian Jake Hayes, whose welcome video part was published on the Internet in April 2013.[54]

As of November 1, 2014, the regional teams were no longer listed on the company's websites.

On June 15, 2016 DC Shoes introduced their new global surf team marking the return of the DC Shoes Surfing platform since 2003.