Delage is a French luxury automobile and racecar company founded in 1905 by Louis Delage in Levallois-Perret near Paris; it was acquired by Delahaye in 1935 and ceased operation in 1953.

On 7 November 2019, the association "Les Amis de Delage", created in 1956 and owner of the Delage brand, announced the re-founding of the company Delage Automobiles.[1] 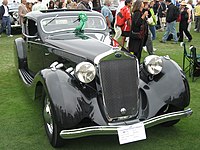 Its first location was on the Rue Cormeilles in Levallois-Perret. The company at first had just two lathes and three employees,[3] one of them Peugeot's former chief designer.[3] Delage initially produced parts for Helbé, with the De Dion-Bouton engine and chassis assembled by Helbé; Delage added only the body.

In 1907 the factory moved to the Rue Baudin Levallois, where a 4,000 m2 (43,000 sq ft) workshop allowed it to grow. The two-cylinder Delages were no match for the competition this year at the Coupe des Voiturettes.[3]

Delage converted to four-cylinder engines in 1909, at first provided by De Dion and Edouard Ballot; shortly, the company were producing their own sidevalve fours, too.[6]

After an increase in sales, the existing facilities were too small, so in 1910 the factory moved to a new facility at 138 Boulevard de Verdun,[6] Courbevoie. The following year saw the creation of advanced bodywork. By 1912, 350 workers were producing over 1000 cars annually, and offered four- and six-cylinder sidevalve engines.[6]

During the First World War, Delage produced munitions.[6] Production of passenger cars virtually stopped, with the exception of some fabrication for the Army. But the Delage factories were running full support for the war effort.

The 1920s were really the first "Golden Age" of Delage. The most famous were the DE and DI: 4 cylinders of about 2 liters and 11 hp. Delage also attempted to compete with Hispano-Suiza, with the GL of 30 hp and 5954 cc, with some success. After that came a new generation of six-cylinder cars, like the MD (3174 cc) and DR (2516 cc), the best-selling vehicle in the history of the brand, designed by engineer Gaultier.

In 1913, the new type Y set the fastest lap time at the French Grand Prix at Le Mans, and in 1914, this same car won the 1914 Indianapolis 500 with René Thomas at the wheel. Thomas, Guyot, and Duray returned[when?] to the French Grand Prix with 4½-liter twin-cam desmodromic valved racers featuring twin carburettors, five-speed gearbox, and four-wheel brakes.[6] While quick, they proved unreliable; only one finished, Duray's, in eighth.[6]

In 1914, Delage emphasized its focus on competition by creating the type O Lyon Grand Prix, while at the same time moving towards the luxury car market with 6 cylinders of a large class. However, racing was severely curtailed during World War One. 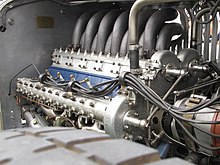 The V-12 engine in a 2 LCV. Note the exhaust on top, between the cylinder banks

In 1923 Louis Delage returned to competition with the innovative 12-cylinder 2-liter type 2 LCV. This car won the 1924 European Grand Prix in Lyon and the 1925 Grand Prix of ACF Montlhéry. The 12-cylinder DH (10,5 liters) of 1924 beat the world speed record on the highway, at 230 km/h (143 mph).[citation needed] A Delage 155 B won the first Grand Prix of Great-Britain in 1926, driven by Louis Wagner and Robert Senechal. The production of cars continued with the DI and the DI S SS. The DM evolved into the DMS and DML, equipped with a 6-cylinder 3-liter engine designed by Maurice Gaultier. 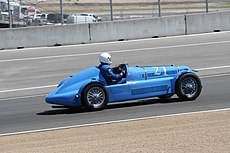 The D6 and the D8: The Classic Era

1930 saw the launch of the 6-cylinder Delage D6 which would form the mainstay of the manufacturer's passenger car range until 1954.

But the backlash of the economic crisis of 1929 arrived and manufacturers of luxury cars all over the world suffered from poor sales. The commercial and financial situation of the firm was badly shaken. In 1932 Delage introduced the type D6-11 (6-cylinder 2101 cc), and two years later the new eight-cylinder Delage, type D8-15 (2768 cc). These two models, equipped with independent front wheel suspension did not increase sale figures. The transverse leaf and wishbone independent front suspension was licensed by Studebaker for their cars.[10]

Financial pressures never disappeared, however, and during the Spring of 1932 Louis Delage was obliged to take out a 25 Million franc loan in order to finance the tooling needed to put the D6 into production.[15] It was at this time that he also entered into negotiations with Peugeot about using their dealership and service network.[15] These negotiations went nowhere, and discussions with other possible partners/rescuers also came to nothing.[15] There were also personal problems involving his marriage which necessitated a rearrangement of Delage's personal finances, although in the event it was the sale of his expensive home in the Champs-Élysées that reduced the pressure on his finances if only in the short term.[15]

But Louis Delage would not admit defeat, and with the help of a businessman called Walter Watney created the Société Nouvelle des Automobiles Delage (SAFAD), to market Delage cars, assembled from production Delahayes. This union created the 4-cylinder DI 12 and the D8 120, and also the 6-cylinder D6 70. Watney had taken control as president of SAFAD, but he was a British national and in June 1940 he was obliged to leave Paris as the German Army arrived.[16] Watney stayed in France, at his villa in Beaulieu, until the end of 1942 after the Germans had completed their occupation, but already in December 1940 the presidency of the SAFAD business had passed directly into the control of Delahaye.[16] In any event, since the outbreak of the war Delage had been largely inactive, although they did undertake work on a project to replace the six-cylinder engine of the Hotchkiss H39 tank with the more powerful 8-cylinder unit from the Delage D8 120.[16]

Delage produced at least two types of racing aero-engine during the early 1930s. The Delage 12 CED was fitted to the Kellner-Béchereau 28VD racing aircraft, intended to compete in the 1933 Coupe Deutsch de la Meurthe air race. Unfortunately the aircraft crashed during qualification trials for the race on 12 May 1933.[17] The second engine type, the , remains a mystery, with very little information available.

After the Second World War

A large prototype Delage D-180 limousine appeared at the 1946 Paris Motor Show but there were evidently no further developments on this project and by the next year the big prototype had quietly disappeared.[18] At the 1947 Paris Motor Show only a single model was exhibited as the business focused on its six-cylinder 3-litre Delage D6[18] which in most respects will have been familiar to anyone who had known the 3-litre Delages of the 1930s. The car was offered with bodies by firms such as Chapron, Letourner & Marchand and Guilloré. A variety of coupe and cabriolet bodied D6s were produced. In addition, both Guilloré and Chapron produced a large saloon/sedan body. The two were remarkably similar, both being six-light four-door cars with conservative 1930s style shapes. Something else the two had in common was unexpectedly narrow rear doors, enforced by the combination of a long body, a long rear overhang and a relatively short wheelbase provided by the D6 chassis.[18] A longer wheelbase 1952 special version, bodied by Guilloré, was owned by National Assembly president Edouard Herriot.[19]

Nevertheless, these were difficult times for luxury auto-makers in France and by now the company's registered head office was the same as that for Delahaye: production statistics from the period group Delage and Delahaye together.[19] Louis Delâge himself, who had lived in poverty and quasi-monastic isolation since bankruptcy in 1935 had enforced the transfer of his company to Delahaye,[10] died in December 1947, and during the next few years any residual autonomy that the business had enjoyed disappeared.[18] Increases in motoring taxes, most notably in 1948 and most savagely targeting cars with engines of above 2 litres, combined with the depressed economic conditions of post-war France to create a difficult market for luxury car manufacturers. In 1950 Delahaye produced 235 cars which will have included a significant number of Delages. In 1951 the combined production figure for the two brands slumped to 77: in 1952 it was down to 41.[19] In 1953 Delage production ended.

Delage was absorbed into Hotchkiss along with Delahaye in 1954, and car manufacturing ended.[10]

On 7 November 2019, at the Lyon Époqu'auto show, Les Amis de Delage and entrepreneur Laurent Tapie, son of Bernard Tapie, announced that they had signed an agreement for relaunch the Delage Automobiles brand.[20] Tapie becomes president of Delage Automobiles.

The new Delage planned for this project is called the Delage D12. It is a hybrid supercar powered by a normally aspirated V12 engine of 900 hp (670 kW), coupled to an electric motor of 330 hp (250 kW), for a cumulative power of 1,230 hp (920 kW).[21] It will be produced in France like all Delages. Delage Automobiles has joined forces with racing driver Jacques Villeneuve as the development driver for the future production model. The car was presented at private events in Los Angeles and Orange County in California in December 2019.

During their years of independence, Delage made almost 40,000 cars at their workshops in Levallois and Courbevoie.[22][23] After Delage production was subsumed into the Delahaye operation, approximately another 2,000 Delage badged cars were manufactured between 1935 and 1940.[22][24] With the post-war resumption of passenger car production, 330 Delage cars appear to have been produced by Delahaye between 1946 and 1953.[22][25]