The Dodge Charger is a model of automobile marketed by Dodge.

There have been several different production variants of Chargers, built on three different platforms and sizes. In the United States, the Charger nameplate has been used on subcompact hatchbacks, full-size sedans, muscle cars, and personal luxury coupes. The current version is a four-door sedan.

The name was also carried by a 1999 concept car that differed substantially from the Charger eventually placed into production for the 2006 model year. A similar name plate, the Ramcharger, was used for the truck-type vehicle.

The name Charger was also used in Brazil as a performance model based on the Dart (A-Body) (1971–80). 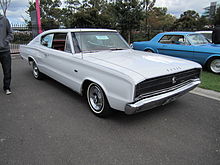 The Dodge Charger was introduced during the 1966 model year. It featured a two-door fastback body design and a four bucket seat interior. The intermediate-sized Charger shared components with the Coronet that also used the Chrysler B platform. The base engine was a 318 cu in (5.2 L) V8 with a three speed manual. Larger and more powerful engines were also available. Sales were low. 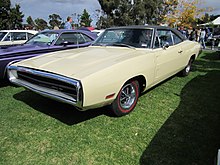 The Charger was redesigned for 1968, and an initial 35,000 units were slated for production. The demand was high and 96,100 Dodge Chargers were actually produced.[4] Based on the Chrysler B platform, the model years received various cosmetic changes to the exterior and interior including: an undivided grill, rounded tail lights, and hidden headlights. The powertrains were carried over from 1967, but the 225 cu in (3.7 L) slant-6 became available in mid-1968.[5] The Charger was not successful in stock car racing such as NASCAR. A more aerodynamic shape formed the Charger 500 model that became the basis for the 1969 Dodge Charger Daytona. 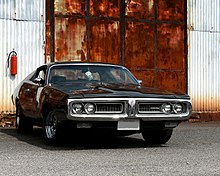 The third generation Charger was introduced for the 1971 model year. Chrysler's B platform was modified to meet new emissions and safety regulations. Available in six different packages with cosmetic changes that include: a split grill, semi fastback rear window, and a ducktail spoiler. The 1973 and 1974 Chargers were very similar to the 1971 with minor differences in the grill and headlamps. 1973 and 1974 Chargers also wore new quarter windows, which were larger and shaped differently than the quarter windows seen on 1971 and 1972 models. The increase in sales was mostly due to the elimination of the Dodge Coronet, which meant Dodge offered the two-door intermediate-size body style only as the Charger.

The 1975 model year Charger continued as a B body car and was restyled. The new Charger was Dodge's attempt at moving the model into the growing personal luxury car market segment. Dodge expanded its presence in the personal luxury car market in 1978 when it produced two cars in the same class, the Charger and the Dodge Magnum. During the years this car was offered, a Daytona model was offered, featuring stripes that ran along the length of the car. 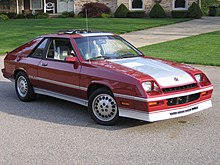 The Charger returned in 1981½ as a subcompact hatchback coupe with front-wheel-drive, and a five-speed manual or three-speed automatic transmission. This economy-type model was similar to the Dodge Omni 024, but with a slightly larger engine. The Charger was available with the NA 2.2l SOHC or a turbocharged 2.2l SOHC engine. The turbo was available only with the manual transmission, unlike in the Dodge Daytona. A Shelby Charger was offered starting in 1983, with a turbo version available in 1984 producing 148 horsepower (110 kW) at 5600 rpm and 160 pound-feet (220 N⋅m) of torque at 3200 rpm. The engine was not intercooled and used a small t3 Garrett turbo. In 1985, the electronics were updated but power output was the same. In 1986, the electronics were further updated.

Dodge reintroduced the Charger in 2005 for the 2006 model year in a new form.[6] This generation was available only as a four-door sedan using the Chrysler LX platform The design was intended to be reminiscent of the Chargers of the 1960s and 1970s and the taillights harkened back to that era, as did the new stamped hood and side panels. This generation was available with a V6 and V8 engine options coupled to automatic transmissions, as well as all-wheel drive (AWD).

In its inaugural year, the Dodge Charger was available in SE, SXT, R/T, R/T with Road/Track Performance Group, Police, and Daytona R/T versions. The basic SE model included a 2.7 L V6 engine, 5-speed automatic transmission with "AutoStick" manual shifting feature, 17-inch wheels, air conditioning, all-speed traction control, as well as ABS and electronic stability control, a CD player, tilt and telescoping steering column, power locks/mirrors/windows, and remote keyless entry. Additional features and trims were available including the Charger R/T with a 5.7 L Hemi V8 mated to a 5-speed automatic transmission. A multiple-displacement system that allows it to save fuel by running on only four cylinders when cruising was also featured in the V8.

The Dodge Charger received an improved interior and new exterior styling for 2011. This included new side scoops along both front and rear doors, as well as more angular headlights, aggressive new grille styling, and a more defined and aerodynamic shape overall. Most notably, the rear end adopted a more modern wrap around LED tail light spanning across nearly the entire length of the trunk. Driver visibility was improved by more than 15% addressing complaints from previous years. The side and rear styling cues are reminiscent of the 1968-1970 models.

The 2012 year brought a new 8-speed automatic transmission to the V-6 model. This year also saw the return of the SRT-8 to the model lineup. AWD was also added to the V6, making AWD available on all but the SRT-8 model.

The 2014 Pursuit model no longer has chrome exhaust tip extensions, as they often scraped during manuevers over medians.

The 2017 model had an upgrade to the 8.4 nav/display system and was restyled due to issues with the previous system.

For 2015, the Charger received significant exterior styling updates. Most notably, the new front end which featured new LED lights and a more aerodynamic nose that was less angled and featured a noticeable curve around the headlight housing. Suspensions, interior, and brakes were also redesigned.

All models, except for Charger Pursuit (through 2019), came standard with the eight-speed automatic transmission. In January 2014, the AWD Charger Pursuit appeared, and the V8 R/T AWD model disappeared. Sales of the AWD Pursuit have since skyrocketed.

For 2020, the Charger Hellcat comes standard with the "widebody" to accommodate an improved tire/suspension package. The 2020 Charger Pursuit is only available in the RWD V6 and AWD V8 models, with the RWD V8 model being discontinued. Both Pursuit models now feature the eight-speed automatics.