Dundrod Circuit is a motorsport street circuit used for the RAC Tourist Trophy for sports cars between 1950 and 1955 and for the motorcycle Ulster Grand Prix from 1953 onwards. It is situated near the village of Dundrod in Lisburn, Northern Ireland. The nearby Clady Circuit also in County Antrim was used for the Ulster Grand Prix between (1922–1952) before moving to the Dundrod Circuit.[1]

The Dundrod Circuit (Irish: Dún dTrod) in Co Antrim, first used in 1950 for the RAC Tourist Trophy automobile race and the Formula One (non-championship) Ulster Trophy (1950-1953), was 7.416 mi (11.935 km) in length and later amended for the 1965 racing season to 7.401 mi (11.911 km) with the addition of the Lindsay Hairpin. For the 1953 racing season the Clady Circuit was abandoned for motor-cycle racing and the Ulster Grand Prix as part of the FIM Motorcycle Grand Prix World Championship and was moved to the nearby Dundrod Circuit in Co Antrim. The circuit comprised public roads closed for racing including a section of the secondary B38 Hannahstown Road between Glenavy and Hannahstown, Co Antrim, the secondary B101 Leathemstown Road from Leathemstown Corner to Dundrod and the B153 Quarterland/Tornagrough Road from Cochranstown to the road junction of the B38 Upper Springsfield Road/Hannahstown Road at the Lindsay Hairpin. After 1955 cars stopped racing there due to no less than 3 fatalities during the 1955 TT race and safety concerns with the narrow, high-speed nature of the circuit, and since then it has only been used for motorcycle racing.

The photo below shows the original much tighter hairpin, with the modern hairpin, known now as the Lindsay Hairpin, being slightly further back up the road. 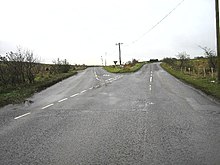 The 1971 Ulster Grand Prix held on the Dundrod Circuit was won by Australian Jack Findlay in what was the Ulster Grand Prix's last year as part of the FIM Grand Prix international motorcycle racing calendar. Findlay's victory on a Suzuki was also notable for marking the first 500cc class win for a motorcycle powered by a two stroke engine.[4][5]