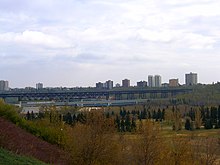 A new feature on ETS, Smart buses have since July 2013, seen operating on several routes, the trial routes were 111 which went from West Edmonton Mall to Downtown and 128 which went from Castle Downs to University, This system respectively used 45 buses. As of November 2014, there are 22 routes equipped,.[5][6][7][8][9] Real time bus arrival information on personal computers and mobile data is branded together as ETS LIVE and a mobile app, ETS Live to Go, has been released.[5] The buses equipped possess automatic audio visual stop announcers of the next bus stop described by its nearest intersection, a computer aided dispatch which informs the control centre where a bus is, as well as monitor incidents. Mobile data terminals inform the drivers as to if they are late or not. The buses equipped have internal covert cameras to monitor safety.[10][11] City council has approved funding for Smartbus deployment on all bus routes as of 2019 and 2020.[12] On 4 September 2016, all 928 busses in the ETS fleet had been fully equipped with Smart bus technology, earlier than initially planned.[13]

Night service began on 6 September 2015, on routes 1, 4, 8, and 9 and 512.[14]These buses operate until approximately 3:30 or 4 AM. Morning service then resumes around 5:00 AM. Route 512 acts as a late night replacement for northern sections Capital Line (operating after the LRT shuts down for the night) from Clareview to Downtown.[14]

Transit Centres in Edmonton serve as hubs which allow people to transfer bus routes or onto the LRT system. These hubs typically have a heated shelter, and have multiple bus bays to accommodate many buses at a time.

ETS numbers its bus routes based on the community they serve, with numbers 1-23 being base routes.[17] Routes numbered 24-99 are south Edmonton routes, while routes 100-199 run north of the river. For example, routes 60 to 79 are located in Mill Woods, while routes 160-179 are located in Castle Downs. Due to a shortage of numbers in allocation of route numbers, there are a number of exceptions. Furthermore, commuter routes have been allocated numbers in the 500's. All routes are serviced by accessible low floor buses.[18]

The city is currently in the process of introducing a complete bus network redesign, which will completely change how routes are numbered and where they go. This change will be implemented in August 2020.

Trolley bus service in Edmonton started on 24 September 1939, operating on route 5 from 101 St/Jasper Ave to 95 St/111 Ave. By the end of October of that year, service had started on another route running to 99 St/Whyte Ave via the Low Level Bridge. In Edmonton, trolley buses were often referred to simply as "trolleys".

The trolley bus system used a mixture of Ohio Brass and K&M Elastic (Swiss) suspension for holding up the overhead wires.

The 47 vehicles remaining in use in 2008 were from an order of 100 manufactured in 1981-2 by Brown Boveri & Company (BBC), using bodies and chassis supplied to BBC by GM.[citation needed]

On 18 June 2008, city council voted 7 to 6 in favour of phasing out the trolley system between 2009 and 2010.[22] However, city council decided in April 2009 that trolley bus service would be discontinued earlier than originally planned, in order to reduce the city's expected $35 million deficit that year.[23] The last day of regular service was 2 May 2009.[24]

In 2008, the city leased a low-floor model of trolley from Coast Mountain Bus Company, Vancouver's bus operating company, for testing of possible benefits of low-floor trolleys over hybrid diesel buses. During its time in Edmonton the bus was numbered 6000, but was returned to its original #2242 when returned to Vancouver.[25]

Edmonton operated streetcars from 1908 to 1951, some of which are now owned by the Edmonton Radial Railway Society. 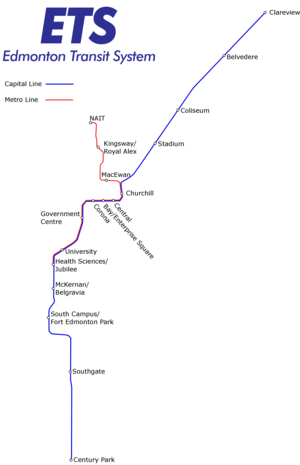 Map of the Edmonton LRT Network

ETS operates a 20.5 km light rail route with fifteen stations. The Capital Line runs roughly north-south, between Clareview station in northeast Edmonton and the Century Park station on the south side, with a mix of tunnels and at-grade track. Six stations are underground, while the remaining nine are at-grade with surface road crossings.

In 2015, the Metro Line opened, interlining with the Capital Line on some sections and servicing the central and north-central area of the city.[26]

The train shown to the right was made in Germany by Siemens/DÜWAG. The same type of vehicle has operated on several underground lines in Frankfurt am Main since 1968 as type U-2. ETS also has Siemens SD-160s from Siemens. These were delivered to accommodate four new stations which opened in 2009 and 2010.

The City of Edmonton embarked on an eight-month evaluation of 13 clean-diesel and hybrid buses (and a new trolley bus) in 2008. Edmonton Transit's first two diesel electric hybrid buses went into service in December 2006.[28] The unique design and colour scheme of the two Orion low floor buses have been chosen to enable them to 'stand out' from the rest of the ETS fleet. The buses were part of an extensive test of hybrid technology that Edmonton Transit and the University of Alberta conducted over a year. Bus reliability, performance, maintenance costs, fuel efficiency, noise generation and environmental impact were monitored and evaluated in all weather and road conditions. As well, customers were surveyed about their travel experience. Ultimately, the Hybrid buses only recorded fuel savings of 10-20% (in contrast to the 35% touted in the internal ads). In addition, the ISE-New Flyer hybrids (6003 and 6004) were out of service so much that they could not be included in the evaluation.

As of fall 2009, only the two Orion hybrids were in service. New Flyer/ISE hybrids 6003 and 6004 have since been converted to diesel buses as of 2011. New Flyer/Allison 6002 was revamped with new features and technology to become the ETS Platinum Bus, also referred to as the "Painted Lady".[29]

In Spring 2014, ETS unveiled a full electric bus for a four-month pilot program through October 2014. The buses are referred to as "ETS Stealth Buses" and are on lease from Build Your Dreams (BYD) Co. Ltd.. The buses do not have a fare box at the moment, but instead are accepting customer surveys about electric buses as fare.[30] Even without fare capacity the buses will be placed on several different routes around the city to give many Edmontonians the ability to experience the new exhaust-less bus. The current electric bus is not winterized, but if the city moves forward with the electric bus program they intend to acquire buses with full winter capabilities.

In 2019, Edmonton received the funding to purchase 50 electric buses from Proterra. These buses will enter service between summer 2019 and 2022, and feature low-emissions and quieter operation. This is the single largest purchase of electric buses in Canadian history.[31]

In December 2014 Edmonton City Council approved SmartFare, which comprises an electronic farecard and intermunicipal fare structure.[12] This new system is set to be active in early 2021.[32]

The table below lists fares as of 1 February 2020.[33][34] ETS currently only accepts cash for fare payments made on buses and at LRT stations.

Children 12 and under ride free with a fare paying adult (otherwise they must have a valid youth fare). Day passes provide unlimited travel for up to five people (maximum 2 adults over 24).[35]

ETS provides several discounts for students and the disadvantaged:

Some routes have different fare structures due to the distance they cover or because they enter different municipalities outside of Edmonton.

Children under 12 ride free (with an accompanying fare-paying passenger). Beaumont tickets, passes and transfers cannot be used on regular ETS services. The U-Pass is not accepted on route 540, however the option is being considered for the future.[45]

No additional fare for holders of a UPass, Leduc Commuter-Plus pass, or Leduc route 10 to route 747 transfer

One way fare reduced back to $5 on 1 May 2018 (after it rose to $10 on 1 February 2018), when an increase in joint funding from the City of Leduc, Leduc County, and the Edmonton International Airport was agreed upon.[47]

Some Strathcona County Transit tickets/passes/transfers are valid on ETS and vice versa. These are the details effective 1 February 2018:[48]

Some ETS tickets/passes/transfers are valid on StAT and vice versa:[49]

The City of Edmonton began the process of completely redesigning its bus route network in 2017, with the aim of making it run more efficiently. Since then, two rounds of public consultations have been held at various locations around the city, and online surveys have taken feedback from riders. The public engagements have identified that transit riders would rather have to walk further to get to higher frequency routes, opposed to more routes operating less frequently. The city released a final draft of the new bus system in 2018, which cut back on routes with low ridership, and increased frequency in high traffic areas. After the redesign, all routes will be renumbered to make the system easier to navigate. New signage and materials will be created to assist in wayfinding. The redesign is scheduled to be rolled out in mid-2020. No change to fares has been announced, but the Manager of ETS has stated that ETS could switch to a distance-based system, where fees are based on how far a rider travels.[51]

The preliminary engineering of a park-and-ride at 127 Street SW and Ellerslie Road SW is complete. A station will be located there when the funds are available to extend the LRT over Anthony Henday Drive.[52] City staff have recommended that the Heritage Valley Transit Centre and park-and-ride be built starting in January 2018, at an approximate cost of $20 million because the park-and-ride lease at Century Park is due to expire.[2] The Kathleen Andrews Transit Garage is a future transport depot currently under construction on Fort Road, named after ETS manager Kathleen Andrews, and covering 300 buses and 700 drivers. It is expected to open in late 2019.[53]

Construction on phase one of the Metro Line extension, which includes a permanent NAIT station and station for the Blatchford community on the old City Centre Airport property, will start in mid-2020.[54] NAIT station current is located north of Princess Elizabeth Avenue, on the south side of the Institute's swimming pool and hockey arena (S) wing.

The Valley Line will run for 27 kilometres (17 mi) from Mill Woods through downtown Edmonton to Lewis Farms, with 25 stops. The 11-station segment from Mill Woods to 102 Street in downtown, known as "Valley Line Southeast", will be constructed first, beginning in 2016 and finishing by 2021.[55] Construction for phase two of the project, dubbed "Valley Line West", is expected to start in 2021.[56] Preperation work for the second phase, including property surveys, utility relocation, and land acquisition, is already underway.[57] Unlike the existing LRT, the Valley Line will run primarily at grade in the centre median of city streets, connecting to the Capital and Metro lines at Churchill station.[58] The line will cost $1.8 billion, with $800 million coming from the City of Edmonton, $600 million from Alberta, and $400 million from the federal government. A public–private partnership was established between the City of Edmonton and a private contractor to build and operate the east portion of the line.[59]

City council in the past has looked at creating long range transportation plans that include the LRT reaching St. Albert to the northwest, Lewis Estates in the west (with West Edmonton Mall en route), the Edmonton International Airport and Leduc to the south, Mill Woods in the southeast, and Fort Saskatchewan to the northeast.