He was born in Rome, however he traces his roots to the small town of Latera near Viterbo through his mother's family. He is married to Marlene, with whom he has two sons, Cristoforo, born in 1993 (Mechanical Engineer, currently Performance Engineer in F1) and Goffredo, born in 1996 (Automotive Engineer specialised in Motorsport).

He began racing cars in 1980 after having raced seven years in go-karts, where he was two time Italian Champion and runner up in both the European and the World Karting Championships. He went on to win races in all the feeder series he competed in including F3, F3000 and Formula Nippon. 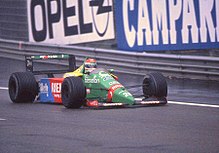 Pirro driving for Benetton at the 1989 Belgian Grand Prix.

In 1988 he was contracted by McLaren to become test driver to develop the new Honda powertrain for the MP4/4, staying on in that role for the following 3 seasons.

His racing career in F1 started at the 1989 French Grand Prix for the Benetton-Ford team, replacing Johnny Herbert who was still recovering from injuries sustained in a F3000 accident. For the 1990 and 1991 seasons, he raced for BMS Scuderia Italia.

Together with his single seater commitments he raced as a factory driver for BMW in touring car racing up until 1993. He raced and won in ETCC, WTCC, Italian Supertouring and DTM. In DTM he became one of the only drivers to win in his debut in the series. Notably, he won the 24 Hours Nürburgring, the Macau Guia Race twice, and the Wellington 500 four times, with the legendary BMW M3 E30 and team Schnitzer. After leaving BMW in 1993 he joined Audi to win the 1994 and 1995 Italian Touring Car Championships followed by the German Touring Car Championship in 1996. Between the years of 1994 and 1996 racing in the Italian and German Supertouring championships, he contested a total of 70 races finishing only once outside of the top 10 after being taken out at the start in 1994 at the Salzburgring. 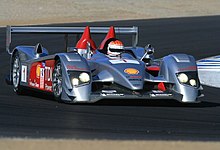 After his debut in endurance races at the young age of 19 winning in his class with the Lancia Beta Montecarlo Gr.5 at the 24 Hours of Daytona, winning the Kyalami 9 Hours and a terrible experience at Le Mans the same year, he scarcely participated in these races except sporadic appearances in Japan, first with a Nissan Gr.C at the Fuji 1000 km and with a Porsche 962 Gr.C at the Suzuka 1000 km. That is until his return to Le Mans in 1998 with a McLaren F1 alongside Dindo Capello and Thomas Bscher ending with a retirement. In 1999 Audi unveiled the R8R with which he scored his first of a record breaking nine consecutive podiums at the French classic. In 2000 along with Tom Kristensen and Frank Biela he scored the first of three consecutive wins with the new Audi R8. In 2006 together with Frank Biela and Marco Werner he became the first driver to win the 24 Hours of Le Mans with a diesel car, repeating the win in the following year. In 2008 he announced the end of his racing career with Audi sportscars. Between the years of 1999 and 2008 he won five 24 Hours of Le Mans, two ALMS championships, two 12 Hours of Sebring and three Petit Le Mans. After 2008 he competed in a number of additional races including a 12 Hours of Sebring and 24 Hours of Le Mans with Drayson Racing in a Lola-Judd LMP1 car, the 24 hours of the Nuerburgring with an Audi R8 GT3, the 2011 Gold Coast 500 in the Australian V8 Supercars Championship.

He regularly competes in historic racing.

He owns the , a 5-star hotel in Cortina d’Ampezzo.

Finally he has been a regular player for over 25 years in the Nazionale Piloti football team and the “Star Team for the Children” for Prince Albert of Monaco as well as taking part in other charity events.