The Ferrari GTO (often referred to as Ferrari 288 GTO)(Type F114) is an exotic homologation of the Ferrari 308 GTB produced from 1984 to 1987 in Ferrari's Maranello factory, designated GT for Gran Turismo and O for Omologata (homologated in Italian).[3]

The Ferrari GTO was built to compete in the new Group B Circuit Race series and a minimum of 200 cars were required for homologation. Due to multiple deaths and the inherent danger involved with group B rally racing, the Group B Circuit series was suspended at the end of 1986. As a result, the GTO never raced and all 272 cars built remained purely road cars. All of them came in a stock red color, except one which was black.

Some of the GTO's styling features were first displayed on a 308 GTB design exercise by Pininfarina shown at the 1977 Geneva Auto Salon. The 288 GTO started out as a modified version of the 308/328 to hold down costs and to build the car quickly, but little of the 308/328 was left when the 288 GTO was finished. Easily noticeable differences were the GTOs bulging fender flares, larger front/rear spoilers, large "flag-style" outside mirrors and four driving lights at the far sides of the grille. Retained from the original 250 GTO were slanted air vents, put in the GTO's rear fenders to cool the brakes, as well as the rear wing's design, borrowed from the 250 GTO's original wing. The GTO also had wider body panels than the 308's because they had to cover much larger Goodyear tires mounted on racing wheels. The suspension's height could be set higher for road use and lower for racing on tracks. Bodywork material was new and lighter for better acceleration and handling. The GTO's weight was 2,555 lb (1,159 kg), compared to 3,085–3,350 lb (1,399–1,520 kg) for the 308/328. Steel was used just for the doors because major body panels were made from molded fiberglass. Kevlar was used for the hood, and the roof was made from Kevlar and carbon fiber. 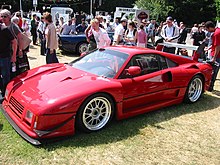 Ferrari built six (five production models and one prototype)[8] 288 GTO Evoluzione models with more aggressive and aerodynamic body styling and increased power. The Evoluzione, introduced in 1986, was built to race in Group B but when that series was cancelled the project was also shelved as it was not fit for any other racing series. Ferrari had planned a production run of 20 cars to comply with Group B homologation requirements for Evolution models. The 288 GTO Evoluzione is powered by an upgraded version of the 2.9 L V8 used in the normal 288 GTO that has twin-turbochargers and produces 650 hp (485 kW; 659 PS) at 7,800 rpm.[9] It has a weight of around 940 kg (2,072 lb) and can reach a top speed of 225 mph (362 km/h).[10] It features a unique front end designed for aerodynamics with front canards, channels and vents as well as a large carbon fibre rear spoiler and numerous large NACA ducts. Many styling and mechanical elements from the Evoluzione influenced the soon to follow F40.

All six are thought to still be in existence with one owned by the Factory on display in the engine manufacturing facility in Maranello and another suspected to have been used as a prototype during the development of the F40.[9][11]

Several Formula 1 drivers were offered GTOs by Enzo Ferrari. These include Michele Alboreto (56195), Eddie Irvine, Keke Rosberg (56653) and Niki Lauda (58329) who was gifted the last of the 272 units built by Enzo Ferrari himself.[12]

In 2004, Sports Car International named this car number two on the list of Top Sports Cars of the 1980s, behind its German rival the Porsche 959.