Francis & Barnett Limited was an English motorcycle manufacturer founded in 1919 by Gordon Inglesby Francis and Arthur Barnett and based in Lower Ford Street, Coventry, England. Early motor cycles were affectionately known as ' Franny B'. Motorcycles were produced for enthusiasts and was reasonably affordable for citizens for use as general transport. The majority of the lighter motorcycles used Villiers and later Two-stroke engine and later Associated Motor Cycles AMC engines. During the 1930s the 250cc Cruiser model 250 cc (15 cu in) was developed with a faired engine that protected those riding from any oil or dirt – one of the first of its kind to do so. AMC took over Francis & Barnett Limited in 1947 combining this with the James motorcycle models in 1957. The combined company remained in business until 1966.[1][2]

The Lea Francis cycle and motorcycle business had been formed by Graham Francis and R.H. Lea in 1895.,[4][5] who was the son of Graham Francis who manufactured motorcycles under the name 'Lea Francis', went into partnership with Arthur Barnett to create Francis & Barnett Limited. Gordon married a lady whose father was Arthur Barnett and already producing Invicta motorcycles.[6] Both Francis and Barnett both related by marriage started in the same company's workshop as that of Bayliss Thomas and Company Limited in Lower Ford Street, Coventry, established in 1874, who produced the Excelsior model. They were reformed as the Excelsior Motor Cycle Company in 1909. Photograph of Excelsior No1 Works, Bayliss Thomas and Company taken outside the works before 1909 - this is the same works that Francis-Barnett move into.[7] [8] The first English motorcycle produced which continued until 1965. At first Francis Barnett machines were little more than re-badged Invicta motor cycles.[9] During the 1920s Francis Barnett made supple sheet metal work and pressings for the motor industry that proved successful. In 1947 Francis Barnett took over Clarendon Pressings and Welding Company Limited. In 1948 Output was increased and Industrial trolleys and pressed fabricated parts for the motor industry were made.[10][11] Photographs and story of Clarendon Pressings and Welding Company, in Clarendon Street, Earlsdon, Coventry. [12]

The very first new Francis-Barnett motorcycle was well pronounced by its bright red and black fuel tank and J.A.P. two speed 292cc side valved Sturmy Archer Engine (John Alfred Prestwich Engines), but production costs were an early problem.[13] Gordon Francis learned from his army days having seen damaged motorcycles in his Motor Transport Workshop and considered a design of bolted straight tubes as a simple replacement frame. He overcame cost factors by first looking at the problem of frequent fractures of the motorcycles frames and evolved a six straight tubular frame with one of the pairs specially formed. The hub of the rear wheel up to the saddle and footrest formed a triangle and the frame below the tank an inverted triangle. The tank itself was held in position by similarly formed tubes. The frame could be bolted together with basic tools. In 1923 he exhibited a machine with this type of frame at Olympia.[14][2] Riders like Tom Meeten took part at Brooklands and Scottish 6-Day Trials and stunts such as riding up Snowdon.[15] On 12 July 1928 a trio of riders started at the foot of Snowdon at Llandberg Base Station. John Moxon and Geoffrey Jones from Villiers and Eric Barnett from Francis Barnett. They covered 3,600 feet in 22 minutes. The Supersport 172cc 2.75HP was awarded Gold and Silver medals at the Scottish six day Trials in 1924.[16][17]

Continuing with cost factors and simplicity in mind the new wheels of the new Francis Barnet were on spindles and easily removed. The 147cc Villiers two-stroke engine with flywheel magneto was light with a two speed Albion gearbox, a three speed was an option, and very easily reassembled and at a very low cost. The construction came with a no breakage forever guarantee. Other 250cc and 350cc machines were also produced with a sidecars as an option. The Pullman model followed in 1928 with a 344cc vertical in-line two-stroke Villiers engine. From 1928 to 1930 the black motorcycles followed the fashion and were coloured cream. They reverted to black in 1931 and to Arden Green around 1947.[18] 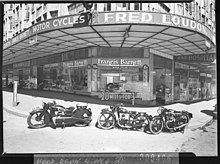 In 1937 Arthur Barnett died aged 74 and his son, Eric took over his father's position at the company as sales director. Eric Barnett was killed by a lorry that failed to stop in 1963.[19] From 1938 a new 98cc Powerbike was made alongside the 125cc Snipe and these were intended for the military soon after the outbreak of World War Two. During the air raids over Coventry in 1940 the Frances Barnett Factory was completely destroyed. The company continued making parts during the war at an alternative location. It was not until 1945 that production resumed back at Lower Ford Street with the 98cc Powerbike and then the 125cc Merlin. The Plover, Falcon and Kestrel machines followed.

Francis Barnett was amalgamated with Associated Motor Cycles in 1947. About that time Francis Barnett brought back the Cruiser names with a 171cc AMC engined Light Cruiser.[6] The motorcycles Plover, Falcon and Cruiser were successful right into the 1950s as good light machines in Arden Green rather than the black finish of earlier days. James vehicles were in maroon. AMC considered Wolverhampton based Villiers to be dictatorial and they commissioned Italian designer Vincenzo Piatti to design a new engine to replace the Villier' engine. The Villiers engine was discontinued in new models in favour of AMC's Piatti designed unit. Unfortunately this did not work well due to cost and unreliability of the AMC manufactured engine.[20] AMC reverted Francis Barnett bikes back to a Villiers engine again.[21] The Falcon 87 with a 199cc single cylinder two stroke AMC engine was introduced and remained in production until 1966. Also that year the Cruiser 84 with a fully enclosed rear wheel and leg shields as standard equipment was available. The first Cruiser was made in 1932 and is a quiet machine made for riders where special wet proof clothing was not required. The engine being enclosed with good leg-shield and mudguard protection. The Cruiser is displayed at Lord Montague's National Motor Museum, Beaulieu.[22][23]

In an attempt to break away from Villiers’ monopoly supply of engines, AMC commissioned Italian designer Vincenzo Piatti to design all-new two-stroke engines. Piatti was already known to AMC management through his novel, but breathtakingly ugly, Piatti scooters, but the project was a total mess from start to finish. First of all, Piatti's design – constrained by AMC's demands for cost cutting rather than quality – was very conservative. Second, it was poorly made by AMC and soon gained a strong reputation for unreliability. Added to this was an all-enveloping dullness which reflected a tired management, distant from its customer base.

In the early 1960s changes in the marketplace caused a transfer of production to Greet in Birmingham in 1962 to join James motorcycles. The Lower Ford Rd, Coventry Factory was closed down and some staff moved to James. The James and Francis Barnett bikes became virtually the same apart from cosmetic changes of colours and badges. The last new model was produced in 1962, the newly designed Fulmar with a spine frame, pressed steel bodywork, leading link forks and 149cc AMC engine. Production of Francis Barnett motorcycles continued until 4 August 1966 when the AMC Empire was taken over by Manganese Bronze. Both Francis Barnett and James ceased to exist from October of that year.[24][6]

Francis & Barnett Ltd. of Coventry also made bayonets. The finish quality was not the same standard as the government factories. These bayonets were very rare, with only a handful of known examples.[42][43] 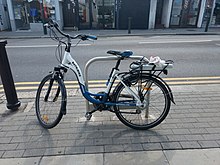