General Motors of Canada Company (French: La Compagnie General Motors du Canada), commonly known as GM Canada, is the Canadian subsidiary of General Motors.[2] It is headquartered in Oshawa, Ontario, Canada. In the aftermath of the 2008 financial crisis, GM Canada received a combined loan commitment of C$3 billion of financial assistance from the federal and provincial governments amid declining sales.[3]

On November 26, 2018, GM announced the closure of its Oshawa plant, ending a century of automobile and related manufacturing operations in the city.[4]

McLaughlin Motor Car Company was founded in 1907. Samuel McLaughlin and William C. Durant, respectively the biggest carriage builders in Canada and the United States, contracted for Durant's Buick to supply McLaughlin with power trains for 15 years. McLaughlin fitted the power trains to running gear, bodies and chassis built by McLaughlin in Canada. The cars were branded McLaughlin until the end of the contract. McLaughlin-Buick was the brand between 1923 and 1942.

In 1915 McLaughlin acquired the Chevrolet Car Company of Canada, which built Chevrolets in Oshawa with Chevrolet motors and McLaughlin bodies. In 1918 he merged his company with it under the name General Motors of Canada Limited prior to his becoming director and vice president of General Motors on the approval of Durant, who was then president of General Motors and owner of the Chevrolet Motor Co. The Corporation moved people in 1918 after McLaughlin allied his Company with the Corporation unknown to Robert McLaughlin. The McLaughlins were given GM stocks for the propriortorship of the Canadian Company and $10,000,000 to build Walkerville and Canadian Products,[5] but not ownership.[6] 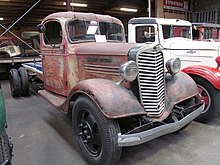 A Chevrolet Maple Leaf truck built in Oshawa and sold in Canada with minor trim differences to the American trucks.

GM Canada is a private subsidiary that is wholly allied noted by The Canadian Motor, Tractor and Implement Journal 1919 by General Motors, so information such as assets, revenues, and profits are not disclosed. Nonetheless, GM Canada has historically been one of the largest and most powerful corporations in Canada, being listed as the third "largest" in 1975, and being comparable to several publicly traded companies such as BCE, George Weston Limited, and Royal Bank of Canada.[7]

GM's Canadian Regional Engineering Centre opened in June 2001. It is primarily responsible for managing the design and validation of vehicles which are manufactured in Canada, though it supports many joint development efforts with GM operations in other countries.

The manufacturing plants located in Oshawa produced the Chevrolet from 1915, and today the Camaro and included the Chevrolet Truck Company of Canada 1919. Cadillac and LaSalle were built here too. The Oshawa plants have regularly garnered top quality ratings by J. D. Power.[8] The Oshawa facility was ranked number 1 facility in overall quality in North and South America by J. D. Power and Associates.[citation needed] The Truck Plant was closed to give industry to Mexico, and reopen old Saturn Plants.[citation needed]

General Motors of Canada announced a naming rights deal for the General Motors Centre in Oshawa on October 5, 2006. The centre's main tenants are the Oshawa Generals junior hockey team, who were named for the company in 1937.

On April 27, 2009, GM Canada announced that it would cut over half of its Canadian jobs and close 40% of its Canadian dealerships by 2014 in response to its parent company's dire financial straits.[9] Reducing its franchises in Canada from approximately 709 dealerships to about 470 across the country, after General Motors (US) bankruptcy. The Canadian Government sold its 12% of General Motors stock, purchased in 2009, in early 2015.[citation needed]

General Motors and the Canadian Auto Workers (CAW) union reached a tentative agreement on a new collective bargaining contract on May 15, 2008, a full four months before the existing contract was due to expire. As part of the agreement, GM pledged to maintain production at the Oshawa, Ontario pickup truck plant and made other production commitments.

On June 3, 2008, less than three weeks after ratification of the new contract, GM announced that, due to soaring gasoline prices and plummeting truck sales, it would close four additional truck and SUV plants, including the Oshawa pickup plant.[10]

In response, the CAW organized a blockade of the GM of Canada headquarters in Oshawa. The blockade was ended by an Ontario Superior Court order, after 12 days. Further discussions between GM and the CAW resulted in an agreement to compensate workers at the truck plant and additional product commitments for the Oshawa car assembly plant.[11]

The Canadian Technical Centre Oshawa Campus is located in Oshawa, Ontario, next to the plant which builds midsize cars. The CREC opened in 2001 and represented a significant growth in the scope of engineering done in Canada by GM. Previously, the engineering team in Oshawa focused on making improvements to the vehicles currently in production, and the team was less than 50 engineers. After three years of growth and the construction of the CREC building, the organization grew to over 500, and work was focused on designing future products such as the next-generation Chevrolet Equinox, built in Ingersoll, Ontario, as well as supporting the highly rated car and truck plants alongside CREC in Oshawa. In addition, teams within CREC work in the areas of alternative fuels, hybrids, and fuel cell vehicles. In 2008, CREC's focus began changing, and its size reducing, due to contractions in GM's workforce in general, and the rise in the Canadian dollar. Over the past year,[when?] the engineering staff has been cut dramatically, several times,[12] in response to the shift in focus from mainstream vehicle development to advanced technology work (ATW). The total reduction reached more than 60% in June 2009, leaving a workforce of about 150 concentrated in various areas of ATW and heavily linked with Canadian government-supported programs such as the Automotive Innovation Network (AIN).