American bus manufacturer
Not to be confused with Gilligan.

Gillig (formerly Gillig Brothers) is an American designer and manufacturer of buses. The company headquarters, along with its manufacturing operations, is located in Livermore, California (in the East Bay region of the San Francisco Bay Area). By volume, Gillig is the second-largest transit bus manufacturer in North America (behind New Flyer). As of 2013, Gillig had an approximate 31% market share of the combined US and Canadian heavy-duty transit bus manufacturing industry, based on the number of equivalent unit deliveries.

The oldest surviving bus manufacturer in North America, Gillig was founded in 1890 as Jacob Gillig, trained in carriage building and upholstering,[2] opened his own carriage shop in San Francisco.[3] In 1896, his son Leo Gillig entered the business as a shop foreman, becoming a full partner in the business in 1900.[2] The shop was destroyed as part of the 1906 San Francisco earthquake, but the Gilligs rebuilt the shop on a separate property; Chester Gillig joined the business as a bookkeeper.[2] In 1907, Jacob Gillig died at the age of 54.[2]

Following the earthquake, the company reopened as the Leo Gillig Automobile Works, which manufactured custom-built vehicle bodies.[2][3] In 1914, two major achievements would happen to the company. After building a three-story factory, Leo and Chester Gillig re-organized the company as Gillig Brothers, its name for the next half-century.[2][3] One of the first bodies built inside the new factory was one for a motor bus, though production would not shift entirely to buses for another two decades.[2]

During the 1910s, most cars in the United States were open touring cars; at the time, fully enclosed sedan bodies were expensive. To offer improvement over the minimal weather protection, Gillig developed an add-on hardtop, patenting its own version in 1919.[2][3]

The increase of closed car production in the 1920s would render the "Gillig Top" largely obsolete by 1925. While other hardtop manufacturers went out of business, Gillig survived largely on its body production, which became its primary source of revenue. In the late 1920s, the company would briefly produce pleasure boats and produce a prototype of a heavy truck; the latter would never enter production.[2]

Following the start of the Great Depression, Gillig Brothers began to look for a steady source of revenue to ensure its survival. Although the company had produced buses sporadically since 1914, in 1932, Gillig designed its first school bus body, a configuration it would produce for most of the next 60 years. In 1935, the company designed its first ambulance body; it also became the West Coast distributor of Superior Coach Company, a manufacturer of school buses and professional cars. In 1937, Gillig introduced its first flat-front (transit-style) school bus.

By 1938, demand for school buses had surpassed the capacity of the San Francisco facility, leading Gillig Brothers to move to Hayward, California, on the eastern side of San Francisco Bay.[2]

In 1940, as a response to the Crown Supercoach, the first Gillig Transit Coach was introduced, as both a coach and school bus. The first mid-engine school bus, the Transit Coach wore an all-steel body and was powered by a Hall-Scott gasoline engine.[2] During World War II, Gillig halted school bus production, instead producing trailer buses to transport workers in defense factories.[2] 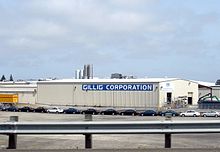 In 1953, Chester Gillig retired, following the death of Leo Gillig. The management structure of the family-run company was changed, with Stanley Marx (previously in charge of sales),[2] assuming control of Gillig. In 1957, a major acquisition was made as Gillig purchased the Pacific bus division of Washington-based truck manufacturer Kenworth. At the time, Gillig controlled a 70% market share of Northern California over Crown Coach (based in Los Angeles), along with a similar share of Washington State, Oregon, and Nevada.[2]

In 1959, the company introduced the first rear-engine school bus with a diesel engine: the Cummins C-Series Transit Coach. Although still offered with gasoline engines in various configurations, the C-Series Transit Coach accounted for over three-quarter of all Gillig sales within only five years. In 1967, Gillig would introduce the largest school bus ever produced: the tandem-axle DT16. Along with it corresponding Crown Coach competitor, the DT16 is the only 97-passenger school bus ever produced in the United States (during 1977, its capacity was reduced to 90).

In 1978, Stanley Marx retired from Gillig, and the firm was sold to Herrick-Pacific Steel, a Hayward-based steel manufacturer. Following the sale, the company was reorganized as Gillig Corporation, its present-day name.[2] During the acquisition and reorganization, Gillig began construction on a 117,000 square foot facility in Hayward, the largest bus manufacturing plant in the western United States.[2][3]

To diversify its product line, in the mid-1970s, Gillig began plans to enter the transit bus segment. Following the end of the "New Look" near-monopoly of GMC and Flxible, in mid-1976, Gillig entered a partnership with West German manufacturer Neoplan to build a series of European-styled transit buses.[2] The 30-foot "Gillig-Neoplan" buses featured propane-fueled engines as an option; the partnership with Neoplan lasted until 1979.[4]

As a more permanent follow-up to the Gillig-Neoplan, the Gillig Phantom entered production in 1980.[5] The first dedicated transit bus produced by Gillig, the Phantom would be produced from 1980 to 2008. A State of California tax-free subsidy helped early sales. Later sales were buoyed by low bids on contracts, and by specializing in serving smaller transit agencies. This strategy proved successful, as the Phantom became one of the longest-lasting transit models. In 1989, Gillig would introduce the Gillig Spirit; similar to the Gillig-Neoplan, the Spirit was a shorter, medium-duty transit bus.

In 1996, following an expansion of the Hayward facility, Gillig introduced the H2000LF, its first low-floor bus.[3] In 1997, it entered full-scale production as the Gillig Advantage.[3] Originally designed as a rental-car shuttle bus, the Low Floor became popular as a second transit bus product line alongside the standard-floor Phantom.

During the 2000s, Gillig would make a number of advances with its vehicles, exploring the uses of alternative fuels and hybrid technologies in both the Low Floor and the Phantom.[3] In 2005, the Low Floor became available in BRT and Trolley Replica body styles.

After 28 years of production, the final Gillig Phantom was produced in 2008; by the mid-2000s, high-floor buses had largely fallen out of favor with transit customers.

In 2015, Gillig Corporation marked the 125th anniversary of its founding.[3]

In May 2017, the company moved its factory from Hayward, California, to Livermore, another East Bay region city, after more than 80 years in Hayward.[1] The move was precipitated by a need for more space, with production having outgrown the Hayward facility. The new Livermore facility, which comprises newly constructed buildings, includes a 600,000-square-foot (56,000 m2) main building and two smaller buildings, measuring 50,000 sq ft (4,600 m2) and 27,000 sq ft (2,500 m2).[1] Gillig plans to retain at the Hayward site a 500,000 sq ft (46,000 m2) warehouse for the sale of parts, but plans to sell the remainder of the Hayward factory, which closed on May 19, 2017.[1] At the time of the move, the company was predicting that around 850 workers would be employed at the Livermore complex.[1]

In 1992, Gillig began producing an LNG fueled version of the Phantom in an attempt to produce a low-emissions transit bus, but later discontinued it. The only remaining LNG Phantoms currently operate shuttle service at Los Angeles International Airport and Dallas/Fort Worth International Airport.

In 1996, Gillig introduced a diesel-electric hybrid powered Phantom, which they produced until 2006. The Low Floor bus is now offered in a hybrid powered version, as the company continues to focus efforts on "clean diesel" technology.

Though Gillig has never built an electric trolley bus (ETB), in 2001-2002 the company supplied 100 body-chassis shells to Seattle's King County Metro Transit for the latter to equip as trolley buses. More than just shells, Gillig shipped these Phantom buses in fairly complete form, including interior fittings such as seats—lacking only propulsion equipment and other ETB-only features such as trolley poles. The Seattle transit agency, Metro, removed the propulsion packages from its old fleet of 1979-built AM General trolley coaches (G.E. traction motor, Randtronics chopper control, and electronic card cage),[8] which the Gillig vehicles were purchased to replace, and shipped them to Alstom (in New York) for refurbishment.[9] After Alstom refurbished the propulsion equipment, Metro installed it in the new Gillig Phantom bodies, along with Kiepe pneumatically operated fiberglass trolley poles.[9]

More recently, Gillig has supplied bus body shells for four prototype dual-mode trolleybuses for the Greater Dayton Regional Transit Authority, two of which function as battery electric buses while away from electrical wires and two of which use a diesel generator.[10] The four prototypes were delivered from Vossloh Kiepe in 2014–2015, and after a year of successful testing, a firm order of 26 production battery-electric "NexGen" trolleys was placed in 2017 to replace its older Skoda/ETI fleet in 2019.[11]