Girardin Minibus Inc. is a Canadian bus manufacturer. Based in Drummondville, Quebec, Canada, Girardin forms part of the Micro Bird joint venture with Blue Bird Corporation. As part of Micro Bird, Girardin is a manufacturer of bus bodies for minibuses for cutaway van chassis.

Following the 2008 closure of Corbeil, Girardin was the lone Canadian-based manufacturer of school buses until the 2011 opening of Autobus Lion (now Compagnie Électrique Lion). 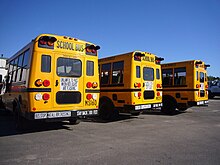 Girardin traces its roots to 1935, when company founder Lionel Girardin opened a used-car dealership and repair shop in , Quebec.[1] He expanded into new-car sales in 1953 by opening a Chrysler dealership. In 1958, Girardin entered the school bus market by becoming a school bus dealership.

In 1965, Girardin opened a bus dealership in Drummondville, Quebec; along with bus sales, Girardin converted vans into minibuses (some of the first Type A school buses). In 1981, a dedicated factory was built to keep up with demand; the factory was expanded in 1991 and again in 2000.

In 1991, Girardin Minibus introduced the MB-II and MB-IV school buses; from 1992 to 1999, these were distributed throughout North America using the Blue Bird by Girardin name. In 2005, the MB-IV was replaced with the G5, a redesigned dual rear-wheel Type A school bus.

In 2009, Blue Bird Corporation entered into a joint venture with Girardin to produce Type A school buses. Under the terms of the joint venture, Blue Bird's Micro Bird (in production since 1975) was phased out and replaced by Girardin-designed products built in Drummondville.

Girardin Minibus has twice entered into partnerships with a larger bus manufacturer; both have been with American manufacturer Blue Bird Corporation.

The first bus manufacturer in North America to develop a body for the Ford Transit cutaway cab chassis, Micro Bird introduced the T-Series model line in 2015, slotted between the MB-II and G5. While the Transit replaced the E-series as a passenger van, the T-Series marked the introduction of a third model line, produced with a choice of axle configurations on a single body for the first time.