Goodwood Circuit is a historic venue for both two- and four-wheeled motorsport in the United Kingdom. The 3.8 kilometres (2.4 mi)[1] circuit is situated near Chichester, West Sussex, close to the south coast of England, on the estate of Goodwood House, and completely encircles Chichester/Goodwood Airport. This is the racing circuit dating from 1948, not to be confused with the separate hillclimb course located at Goodwood House and first used in 1936.[2]

The racing circuit began life as the perimeter track of RAF Westhampnett airfield, which was constructed during World War II as a relief airfield for RAF Tangmere.[3] The first race meeting took place on 18 September 1948, organised by the Junior Car Club and sanctioned by the Duke of Richmond and Gordon.[4] The winner of the first race was P. de F. C. Pycroft, in his 2,664 c.c. Pycroft-Jaguar, at 66.42 m.p.h.[5] Stirling Moss won the 500cc race (later to become Formula 3),[3] followed by Eric Brandon and "Curly" Dryden, all in Coopers. 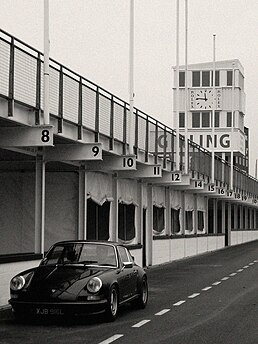 The Goodwood Circuit pits in 2008

Goodwood became famous for its Glover Trophy non-championship Formula One race, Goodwood Nine Hours sports car endurance races run in 1952, 1953 and 1955, and the Tourist Trophy sports car race, run here 1958-1964. The cars that raced in those events can be seen recreating (in shorter form) the endurance races at the Goodwood Revival each year in the Sussex trophy and the Royal Automobile Club Tourist Trophy (RAC TT).

Goodwood has, over the years, played host to many famous drivers: Mike Hawthorn and Graham Hill had their first single seat races there, Roger Penske visited in 1963, and Jim Clark and Jack Sears competed in 1964.[3] The accident that ended Stirling Moss's international career happened at St. Mary's Corner in 1962.[3]

Donald Campbell demonstrated his Bluebird CN7 Land Speed Record car at Goodwood in July 1960 at its initial public launch, and again in July 1962,[9] before being shipped to Australia—where it finally broke the record in 1964. The car was a 30-foot-long (9.1 m) Bristol Siddeley turbine-powered 4,500 hp (3,400 kW) streamliner, with a theoretical top speed of 450 to 500 miles per hour (720 to 800 km/h). The laps of Goodwood were effectively at "tick-over" speed, because the car had only four degrees of steering lock, with a maximum of 100 mph (160 km/h) on the straight on one lap.

Goodwood saw its last race meeting for over 30 years in 1966, because the owners did not want to modify the track with chicanes to control the increased speeds of modern racing cars. The last event of the era was a club meeting organised by the British Automobile Racing Club on 2 July 1966.[10]

The circuit claimed the life of McLaren-founder Bruce McLaren in a testing accident on 2 June 1970.

The accident happened on Lavant Straight, when a rear bodywork failure on McLaren's M8D car caused it to spin and leave the track, hitting a structure on the infield at over 100 mph while travelling sideways.

Goodwood is noted for its annual Festival of Speed and Goodwood Revival events.

The Goodwood Festival of Speed is an annual hill climb, held in late June or early July not on the circuit, but in the nearby grounds of Goodwood House. It features historic and modern motor-racing vehicles. In 2010, the event had over 176,000 visitors over four days.[11]

Following the success of the Festival of Speed hill climb, racing returned to the Goodwood circuit in 1998.[3] The Goodwood Revival is a three-day festival held each September for the types of cars and motorcycles that would have competed during the circuit's original period, 1948–1966. Historic aircraft help to complete the vintage feel. In 2008, a crowd of 68,000 people attended the event on the main Sunday - 9,000 more than in 2007.[citation needed] The track is now used for classic races, track days, and try-out days. Nearly everyone dresses up in vintage outfit from mods and rockers to racing drivers and just smart period clothes.

In 2009, the Mongol Rally, a charity fundraising car rally to Mongolia, moved its starting point from Hyde Park, London to Goodwood. Entrants are on show to the public in the paddock before beginning the rally with a parade lap of the circuit.[citation needed]

The National Finals of the Greenpower schools electric car racing challenge takes place at Goodwood each year. The Greenpower challenge is a nationwide series of electric vehicle endurance races for schools, who build their own 24 volt single-seater racing cars.[12] There is also a corporate version of the race, featuring teams like Lola, Jaguar Land Rover, Bentley Motors and Prodrive.[13]

The 'Breakfast Club' was introduced in March 2006. This is a semi regular free to enter, and open-to-all monthly gathering of drivers and riders who come to view each other's cars, bikes etc. Each meeting is themed with striking examples of the days theme paraded on the start finish straight.[14]

The circuit also hosted the 1982 UCI Road World Championships for cycle racing, notable for the men's professional race, which saw a late breakaway by the American rider Jacques Boyer being closed down by a pack led by Boyer's teammate (and future triple Tour de France winner and double Road World Champion) Greg LeMond.[15]

The circuit was used as a filming location in the series Downton Abbey.[16][17]