This article is about Indian subcontinent culture. For other uses, see Gymkhana (disambiguation).
For the equestrian competition, see gymkhana (equestrian). 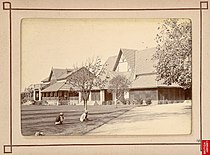 Gymkhana (Hindi: जिमख़ाना, Assamese: জিমখানা, Bengali: জিমখানা, Urdu: جِمخانہ‎, Sindhi: جمخانه‎) is an Indian term which originally referred to a place of assembly. The meaning then altered to denote a place where skill-based contests were held. "Gymkhana" is an Anglo-Indian expression, which is derived from the Persian word "Jamat-khana".[1] Most gymkhanas have a Gymkhana Club associated with them, a term coined during British Raj for gentlemen's club.

More generally, gymkhana refers to a social and sporting club in the Indian subcontinent, and in other Asian countries including Malaysia, Thailand, Burma and Singapore, as well as in East Africa.

In English-speaking countries outside the Indian subcontinent, a gymkhana is a multi-game equestrian competition held to display the training and talents of horses and their riders, particularly in speed events.

The first element of Gymkhana comes from gend meaning ball in Hindi/Hindustani/Khariboli. This element is distinct from English word gym, short for gymnasium and gymnastics which has Greek and Latin roots.[2] The second element, khānā (ख़ाना) has Indo-Persian or Indo-Arabic origin meaning a place or a compartment. In the Persian (خانه) it's a term for dwelling, house.[3]