Type of smooth space curve
This article is about the shape. For the shape of deoxyribonucleic acid, see Double helix. For other uses, see Helix (disambiguation). 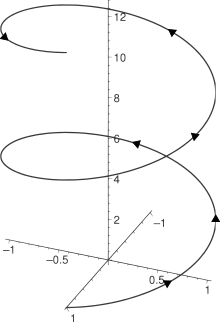 The right-handed helix (cos t, sin t, t) from t = 0 to 4π with arrowheads showing direction of increasing t

A helix (/ˈhiːlɪks/), plural helixes or helices (/ˈhɛlɪsiːz/), is a shape like a corkscrew or spiral staircase. It is a type of smooth space curve with tangent lines at a constant angle to a fixed axis. Helices are important in biology, as the DNA molecule is formed as two intertwined helices, and many proteins have helical substructures, known as alpha helices. The word helix comes from the Greek word ἕλιξ, "twisted, curved".[1] A "filled-in" helix – for example, a "spiral" (helical) ramp – is called a helicoid.[2] 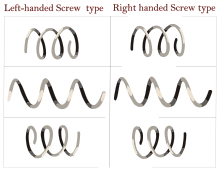 Two types of helix shown in comparison. This shows the two chiralities of helices. One is left-handed and the other is right-handed. Each row compares the two helices from a different perspective. The chirality is a property of the object, not of the perspective (view-angle)

The pitch of a helix is the height of one complete helix turn, measured parallel to the axis of the helix.

A double helix consists of two (typically congruent) helices with the same axis, differing by a translation along the axis.[3]

A conic helix may be defined as a spiral on a conic surface, with the distance to the apex an exponential function of the angle indicating direction from the axis. An example is the Corkscrew roller coaster at Cedar Point amusement park.

A circular helix, (i.e. one with constant radius) has constant band curvature and constant torsion.

A curve is called a general helix or cylindrical helix[4] if its tangent makes a constant angle with a fixed line in space. A curve is a general helix if and only if the ratio of curvature to torsion is constant.[5]

Geometric pitch is the distance an element of an airplane propeller would advance in one revolution if it were moving along a helix having an angle equal to that between the chord of the element and a plane perpendicular to the propeller axis.

A curve is called a slant helix if its principal normal makes a constant angle with a fixed line in space.[6] It can be constructed by applying a transformation to the moving frame of a general helix.[7]

Some curves found in nature consist of multiple helices of different handedness joined together by transitions known as tendril perversions.

A helix composed of sinusoidal x and y components

In mathematics, a helix is a curve in 3-dimensional space. The following parametrisation in Cartesian coordinates defines a particular helix;[8] perhaps the simplest equations for one is

As the parameter t increases, the point (x(t),y(t),z(t)) traces a right-handed helix of pitch 2π (or slope 1) and radius 1 about the z-axis, in a right-handed coordinate system.

In cylindrical coordinates (r, θ, h), the same helix is parametrised by:

A circular helix of radius a and slope b/a (or pitch 2πb) is described by the following parametrisation:

Another way of mathematically constructing a helix is to plot the complex-valued function exi as a function of the real number x (see Euler's formula). The value of x and the real and imaginary parts of the function value give this plot three real dimensions.

Except for rotations, translations, and changes of scale, all right-handed helices are equivalent to the helix defined above. The equivalent left-handed helix can be constructed in a number of ways, the simplest being to negate any one of the x, y or z components.

and its torsion is

A helix has constant non-zero curvature and torsion.

A helix is the vector-valued function

So a helix can be reparameterized as a function of

The unit tangent vector is

The normal vector is

The unit normal vector is

The binormal vector is

In music, pitch space is often modeled with helices or double helices, most often extending out of a circle such as the circle of fifths, so as to represent octave equivalency.