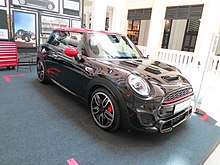 A hot hatch (shortened from hot hatchback) is a high-performance hatchback car.

The term originated in the mid-1980s; however, factory high-performance versions of hatchbacks have been produced since the 1970s.

Front-mounted petrol engines, together with front-wheel drive, is the most common powertrain layout, however all-wheel drive has become more commonly used since around 2010. Most hot hatches are manufactured in Europe or Asia.

Usage of the term "hot hatchback" began in the United Kingdom in 1983,[citation needed] which was shortened to "hot hatch" in 1984.[1] The term first appeared in The Times in 1985,[2] and is now commonly and widely accepted as a mainstream, albeit informal, term. It is retrospectively applied to cars from the late 1970s but was not a phrase used at the time.[3]

Some larger grand tourer sports cars have a rear hatch (such as the Porsche 928, Porsche Panamera, Reliant Scimitar GTE and Ferrari FF), these are hatchbacks, however it is uncommon for these to be referred to as hot hatches.

Due to the historical scarcity of hatchback cars in the United States, the term hot hatch is not widely used in the US.

Since the 1990s and 2000s,[citation needed] the term warm hatch has been used to describe sporting hatchback models of lesser performance than a hot hatch (i.e. a "junior" version of a hot hatch).[4] Examples include the Mini Cooper (which sits below the Mini Cooper S),[5] Peugeot 207 GT (which sits below the Peugeot 207 GTi)[6] Suzuki Swift Sport,[5] and Toyota Yaris SR.[7]

The 1961 Mini Cooper was one of the first performance cars to use a small body and an FF layout, both key characteristics of a hot hatchback. However, the Mini was not produced in a hatchback body style until 2001 and is therefore not considered a hot hatch.

The car credited with establishing the popularity of hot hatches is the Volkswagen Golf GTI,[9][11][12] which was announced at the 1975 Frankfurt Motor Show.[13] and released in July 1976.[14] The Golf GTI was originally designated to be sold only in West Germany, but from 1977 Volkswagen began exports of the (left-hand drive only) GTI.[15] Production of right-hand drive GTI's began in 1979.

The Renault 5 Alpine and Volkswagen Golf GTI, with the addition of a higher performance engine, sharper handling, distinctive body styling with additional spoilers and alloy wheels, helped create the birth of a huge market for small, practical hatchback cars with performance to match contemporary coupes such as the Ford Capri 2.0, Lancia Beta Coupe 2000 and Renault 17 TS. With top speeds above 110 mph (177 km/h), the Alpine and GTI enjoyed a short run of unparalleled sales success until the early 1980s.[citation needed]

Until the early 1980s, the Volkswagen Golf Mk1 GTI and the Renault 5 Alpine/Gordini dominated the retrospectively named hot hatch market segment in many European markets.

By the end of the 1980s, the hot hatch was hugely popular in Europe, and was pushing into other worldwide markets. The brief heyday of Group B rallying pushed the hot hatch genre to its limits, and small numbers of ultra-high performance variants were manufactured to comply with the rally rules (often termed "homologation specials"). These vehicles represented a brief, extreme branch of the hot hatch, and included such notable vehicles as the Lancia Delta S4, MG Metro 6R4 and Peugeot 205 T16.[20]

Performance of hot hatches continued to increase through the 2000s, with an increasing number of models using turbocharged engines. During the 2000s manufacturers started to emphasise the sub-brand of their hot hatch derivatives such as Renault's Renault Sport,[22] Opel's OPC, Vauxhall's VXR[23] and Fiat's Abarth.[24]

Further increases to power outputs saw the adoption of all-wheel drive on several hot hatches, beginning with the Volkswagen Golf R in December 2009.[34][35] Other all-wheel drive hot hatches include the 2011 Audi RS3,[36][37] 2013 Mercedes-AMG A45[38] and the 2015 Ford Focus RS.[39][40] With these models expanding the definition of hot hatches from front-wheel drive to also include all-wheel drive, the hatchback versions of the Subaru Impreza WRX/STI that have been produced at various times could be considered to be hot hatches. However, the WRX/STI is generally considered a compact saloon (to rival the Mitsubishi Lancer Evolution),[41] rather than a hot hatch.

Another technical development for hot hatches since 2010 is the increasing use of dual-clutch transmissions.

Hatchbacks have historically not been popular in the United States, therefore hot hatches are relatively rare in the US.[citation needed]