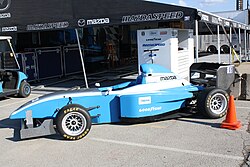 The Indy Pro 2000 Championship Presented by Cooper Tires, formerly known as the Pro Mazda Championship, debuted as a new series in 2013, replacing the Star Mazda Championship which ceased operation in 2012 after 22 years. The series is sanctioned by IndyCar and owned and operated by Andersen Promotions. It is the second official step on the Road to Indy ladder system bridging the gap between the Cooper Tires U.S. F2000 Championship and Indy Lights Presented by Cooper Tires. The series' champion is awarded a scholarship package to advance to Indy Lights competition the following year. It competes on all open-wheel disciplines: road courses, street courses, and ovals. The series' primary sponsor is Cooper Tires.

In December 2012, Star Mazda series founder Gary Rodriguez announced that the series had been sold to Dan Andersen's Andersen Promotions (which already sanctioned the Cooper Tires USF2000 Championship Powered by Mazda) and would be renamed the Pro Mazda Championship. Andersen previously owned a multi-car Star Mazda team, Andersen Racing.[1] Following the departure of Mazda from the Road to Indy program at the end of 2018, the series was re-branded once again to Indy Pro 2000, with Andersen Promotions maintaining its ownership of the series.[2]

In the 1980s, the series had six geographic divisions, each of which held their own championship. In the late-1990s, a single national series emerged as the primary venue for the cars.

The series gradually rose in importance on the American open-wheel racing landscape, as other comparable series such as the Barber Dodge Pro Series, Formula BMW Americas and Formula TR 2000 Pro Series ceased operating.

The first single-seat, tube-frame "prototype" race car (powered by a Mazda rotary engine) was built by Hayashi (in Japan) for use by the Jim Russell Racing School was shipped to the Riverside Raceway school in late 1983.

The Mazda Pro Series (as it was originally known) made its competition debut at the Long Beach Grand Prix. In late 1984, The Jim Russell School was required to make the chassis legal to race in SCCA sanctioned events. So, it was required that all the car's rollover bars be cut off and replaced with a legal SCCA spec hoop. Shortly thereafter, the car became so popular that numerous regional/divisional series was established by the Russell Racing School. The SCCA reluctantly accepted the car into its amateur levels of racing and dubbed it FR (Formula Russell). Early competitors included: Johnny O'Connell, Tommy Kendall, Mike Groff, Jeff Krosnoff, Norm Turley, Norm Breedlove (Craig Breedlove's son), Ken Thwaits, Jon Beekhuis (to name a few). And Rick Swarts, Rick Ware Nascar team owner, and ex-driver.

First Star Mazda Series race as a supporting event on an Indy Racing League weekend at the Phoenix Dura Lube 200 in March. First time a Star Mazda race is shown on national TV – ESPN. Kevin Jenkins was the race winner.

MAZDASPEED Motorsports Driver Development Ladder created to provide funding for champions in various Mazda-powered series to move up in class. Dane Cameron becomes the first Star Mazda Champion to move up to the Atlantic Championship via the MAZDASPEED Ladder.

Joel Miller, the 2007 Champion, becomes the first driver to move up to Star Mazda via the MAZDASPEED Ladder. Star Mazda changes from rolling starts to standing starts to better prepare drivers for moving up to Atlantic and Champ Car. Series changes from bias-ply racing slicks to radials designed specifically for the series by Goodyear. Goodyear has been the sole tire provider for the national series since its inception. Both Goodyear and Mazda signed 5-year extensions of their title sponsorship of the series, through the end of the 2012 season.

The Star Mazda Championship car undergoes its first major mechanical upgrade since it was introduced, including aerodynamic package, engine and suspension modifications, etc. Upgrade package, designed to make the car easier more reliable, and easier to maintain, lower the cost of competition and make it easier for the driver and engineer to hit the 'sweet spot' in the car's handling and performance, is offered to teams, but the use is not mandatory.

IRL 'Road to Indy' program announced, along with the creation of the IRL-sanctioned U.S. F2000 championship. U.S. F2000, Star Mazda Championship, and Indy Lights series named official series on the Road to Indy. First 'Road to Indy' race held with all three series at the same event: Grand Prix of St. Petersburg (Conor Daly winner). Conor Daly becomes the fourth driver in Star Mazda history (including Joey Hand in 1999, Michael McDowell in 2004, and Raphael Matos in 2005) to win four races in a row; goes on to win the championship. Star Mazda TV package includes syndication to 155 million homes worldwide.

Mazda announced as title sponsor of Mazda Road to Indy driver development program that includes scholarship funding for champions at each level to move up and compete in the next higher series; USF2000 > Star Mazda > Indy Lights > IndyCar. The Star Mazda schedule was extensively revised to include six IndyCar weekends, co-feature weekend with Indy Lights, and participation in IndyCar 'Spring Training.' Andretti Autosport joined the series, becoming the first team to compete at every level of the Mazda Road to Indy, including IndyCar. Five drivers from the 2010 series tested Indy Lights cars and two drivers (Anders Krohn and David Ostella) announced full-season Indy Lights programs. Tristan Vautier won the championship, then graduated to Indy Lights in 2012, where he secured that championship as well.

The series' 2013 season was in doubt until it was purchased by Andersen Promotions shortly before the start of the season. The uncertainty had a negative impact on car counts. The 2013 schedule was even further aligned with IndyCar and Indy Lights. Rookie Matthew Brabham of Andretti Autosport won the championship and Gabby Chaves, Sage Karam, Jack Hawksworth, and Zach Veach advanced to Indy Lights.

Rookies Spencer Pigot of Juncos Racing and Cape Motorsports with Wayne Taylor Racing's Scott Hargrove battled down to the wire, with the championship title changing hands three times through the last race. Pigot, leading going into the race, came together with Hargrove and fell to the back of the field, only to see his championship hopes return when Hargrove's gearbox failed. Pigot took the title by 10 points and earned the Mazda scholarship into the Indy Lights series. Also graduating to Indy lights were Pigot's Juncos teammate Kyle Kaiser and Andretti Autosport's Shelby Blackstock.

Uruguayan Santiago Urrutia earned the title over American Neil Alberico with three wins and 10 podium finishes. Uruttia earned a $590,300 Mazda scholarship into the Indy Lights series, where he'll be joined by Alberico and Andretti's Dalton Kellett.

Team Pelfrey teammates Patricio "Pato" O'Ward and Aaron Telitz battled all season long, with O'Ward taking six of the first seven victories and Telitz taking five of the final seven. Telitz's run of nine straight podium finishes (including a sweep of the victories at his home track of Road America) to end the season sealed his championship victory and the $601.700 Mazda scholarship into the Indy Lights series.

With the new Tatuus PM-18 coming online in 2018, increased incentives made Pro Mazda an attractive prospect in 2017. The Mazda scholarship to Indy Lights was increased to $790,300, the top three in the final championship standings would be awarded an Indy Lights test and the top rookie would receive a Mazda road car. Juncos Racing's Victor Franzoni and Cape Motorsports' Anthony Martin enjoyed a spirited fight from the season opener, with the pair splitting the first 10 races of the season. At the Watkins Glen finale, Franzoni scored both victories to take the championship over Martin by 18 points. Franzoni is expected to graduate to Indy Lights with Juncos Racing, who fielded a team in this year's Indianapolis 500.

The original Star Mazda cars were powered by 190+ horsepower Mazda 13B rotary engines.

Currently, the series uses the Tatuus PM-18, which is based on the USF-17 chassis -introduced in 2017- to help control the operational costs for teams who wish to move up.