Interstate 99 (I-99) is an Interstate Highway in the United States with two segments: one located in central Pennsylvania, and the other in southern New York.[4] The southern terminus of the route is near exit 146 of the Pennsylvania Turnpike (I-70 and I-76) north of Bedford, where the road continues south as U.S. Route 220 (US 220). The northern terminus of the Pennsylvania segment is near exit 161 of I-80 near Bellefonte. The New York segment follows US 15 from the Pennsylvania–New York border to an interchange with I-86 in Corning. Within Pennsylvania, I-99 passes through Altoona and State College—the latter home to Pennsylvania State University—and is entirely concurrent with US 220. Long-term plans call for the two segments of I-99 to be connected using portions of I-80, US 220, and US 15 through Pennsylvania.

Unlike most Interstate Highway numbers, which were assigned by the American Association of State Highway and Transportation Officials (AASHTO) to fit into a grid, I-99's number was written into Section 332 of the National Highway System Designation Act of 1995 by Bud Shuster, then-chair of the U.S. House Committee on Transportation and Infrastructure, the bill's sponsor, and the representative of the district through which the highway runs. I-99 violates the AASHTO numbering convention associated with Interstate Highways, as it should lie to the east of I-97 but instead lies east of I-79 and west of I-81.

I-99 begins at an indirect interchange with US 220 and the Pennsylvania Turnpike (I-70 and I-76) north of Bedford. It begins concurrent with US 220, which continues south from the interchange toward the Maryland state line as a two-lane highway known as the Appalachian Thruway. To access the turnpike, drivers are required to use a short segment of US 220 Business. North of the turnpike junction, the limited-access highway becomes the Bud Shuster Highway as it heads through a rural portion of Bedford County. It connects to Pennsylvania Route 56 (PA 56) just west of the Bedford County Airport at exit 3 and PA 869 at exit 7 before crossing into Blair County. Here, it meets PA 164 north of East Freedom at exit 23 prior to entering the Altoona area.[5]

In Hollidaysburg, a borough south of the city, I-99 and US 220 connect to US 22 at exit 28, a large modified trumpet interchange. This junction allows travelers to head west towards Ebensburg, Johnstown, and Pittsburgh. The freeway continues to Altoona itself, where it indirectly connects to PA 36 via exit 32. Unlike the original routing of US 220 which goes through the city center, I-99 and US 220 mostly bypass it to the east, connecting to the city via streets leading eastward from the downtown district. At the northern edge of Altoona, PA 764 joins the old alignment of US 220 and parallels I-99 north for 3 miles (5 km) toward Bellwood. PA 764 leaves old US 220 about 2 miles (3.2 km) south of Bellwood, however, and terminates at I-99 exit 39. Bellwood itself is served by exit 41, which leads to PA 865.[5]

I-99 north near Bald Eagle, Pennsylvania in October 2011

The highway veers northeastward from Bellwood to serve the borough of Tyrone, located at the junction of old US 220 and PA 453. Access to the borough is made by way of exit 48, which serves PA 453. Past Tyrone, I-99 and US 220 head through sparsely populated areas of Blair and Centre Counties. For this reason, only three exits exist between Tyrone and State College: exit 52, serving PA 350 and the small community of Bald Eagle, and exits 61 and 62, which connect to US 322 and the borough of Port Matilda. Here, US 322 joins I-99 and US 220 and follows them eastward to the State College area.[5] 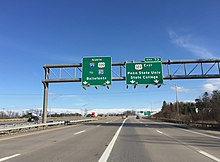 At exit 68 (US 322 Business), I-99 merges into the Mount Nittany Expressway, an older, northerly bypass of State College. I-99, US 220, and US 322 follow the expressway to the , a directional T interchange located on the northern fringe of the Pennsylvania State University campus. Beaver Stadium, the home of the Penn State Nittany Lions football team, is visible from I-99 at this point. US 322 continues east through the interchange to follow the Mount Nittany Expressway while I-99 and US 220 split from US 322 and head northeastward toward Pleasant Gap, which I-99 connects to via exit 81 and PA 26. At this point, PA 26 joins the freeway and follows it to Bellefonte, served by exit 83 and PA 550. The southern segment of I-99 ends about 1 3⁄4 miles (2.8 km) later at an intersection with Musser Lane though the divided highway continues 1⁄3 mile (0.54 km) northeast to an interchange with I-80, where PA 26 continues north and US 220 joins I-80 east.[5] 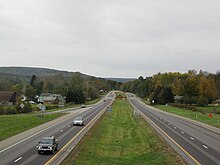 Looking southward along US 15 (now I-99) from the Smith Road overpass in Presho prior to the road's completion. The highway previously narrowed from four to two lanes in the background

The northern segment of I-99 is entirely concurrent with US 15, and starts at the Pennsylvania-New York border north of Lawrenceville, Pennsylvania. A four-lane freeway through the Steuben County town of Lindley, I-99 crosses through a rock cut, making a large bend to the north and bypassing the hamlet of Presho. The freeway enters a partial cloverleaf interchange with CR 5 (Smith Road). After CR 5, I-99 turns northeast through the town of Erwin, running to the west of the Indian Hills Golf Club. Making a gradual bend further to the northeast, the freeway crosses the Canisteo River and enters the hamlet of Erwins, where it enters a diamond interchange with NY 417 (Addison Road). After NY 417, it then turns alongside Norfolk Southern Railroad's Southern Tier Line (former Erie Railroad main line). Now paralleling the tracks and NY 417, I-99/US 15 crosses through Erwin, entering exit 11, which connects to NY 417 once again, next to Gang Mills Yard,[6] the site of the former station.[7] 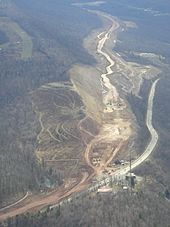 2002 photo of the I-99 excavation, looking south from Julian at the area where acidic rock was exposed on Bald Eagle Mountain

In 1991, the Intermodal Surface Transportation Efficiency Act (ISTEA) was signed into law.[14] It included a number of High Priority Corridors, one of which—Corridor 9—ran along US 220 from Bedford to Williamsport, and then north on US 15 to Corning, New York.[15] The National Highway System Designation Act of 1995 amended ISTEA; among these amendments were that "the portion of the route referred to in subsection (c)(9) [Corridor 9] is designated as Interstate Route I-99."[16] This was the first Interstate Highway number to be written into law rather than to be assigned by AASHTO. The number was specified by Representative Bud Shuster, who said that the standard spur numbering was not "catchy"; instead, I-99 was named after a street car, No. 99, that took people from Shuster's hometown of Glassport to McKeesport. I-99 violates the AASHTO numbering convention associated with Interstate Highways, since it lies east of I-79 but west of I-81.[17]

On November 6, 1998, AASHTO formally approved the I-99 designation, which initially extended 51.2 miles (82.4 km) from the Pennsylvania Turnpike in Bedford to PA 350 in Bald Eagle.[1] In 2002, plans were set in motion to extend I-99 northeast from Bald Eagle to State College via Port Matilda.[18] The extension was fraught with issues, however. The proposed alignment for the highway north to Port Matilda proved to be controversial: while environmentalists called for I-99 to be constructed in the valley below Bald Eagle Ridge, the Pennsylvania Department of Transportation (PennDOT) and valley residents favored a routing that took the freeway above the valley and along the side of the ridge.[19] Farther north, the widening of Skytop, the mountain cut that US 322 uses to traverse Bald Eagle Ridge, resulted in the exposure of acidic pyrite rock in 2003.[18] 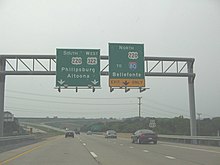 2006 photo of the westbound approach to the . The blank spots on the overhead signs were reserved for I-99 shields.

Work on the segment ceased one year later[18] as PennDOT attempted to stop the flow of acidic runoff from the site. The state remedied the situation by removing 1,000,000 cubic yards (760,000 m3) of pyrite and replacing it with a mix of limestone and fill, a process that took two years and cost $83 million.[17] With the environmental issues settled, construction resumed on the portion of the freeway south of Skytop Mountain. The section from Bald Eagle to Port Matilda was opened to traffic on December 17, 2007,[20] while the remaining section between Port Matilda and the west end of the Mount Nittany Expressway near State College was completely opened on November 17, 2008.[18] In all, the Bald Eagle–State College section of I-99 cost $631 million to construct.[17]

I-99 was extended northeastward to meet I-80 northeast of Bellefonte following the completion of the Bald Eagle–State College segment. The connection was made by way of the pre-existing Mount Nittany Expressway and another, unnamed limited-access highway connecting the State College bypass to the Bellefonte area.[17] The portion of the latter highway north of the PA 26 interchange was originally built in the 1970s as a two-lane freeway connecting Pleasant Gap to I-80. At the time, it was designated solely as PA 26.[10][11] It was widened to four lanes in 1997.[citation needed] The piece connecting the PA 26 freeway to the Mount Nittany Expressway was completed in 2002.[citation needed] US 220 was rerouted via US 322 and the new road, and the old alignment of US 220 north of US 322 was designated US 220 Alternate on May 30, 2003.[21]

On June 27, 2014, New York Governor Andrew Cuomo announced that the interstate-grade US 15 freeway from the Pennsylvania border to I-86 in Corning was officially signed as I-99.[4] 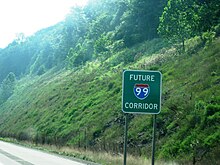 Though there is no specific date for completion, long-term plans call for I-99 to be extended along US 220 from Bellefonte to the junction with I-80, run concurrent with I-80, follow US 220 to Williamsport, and run northward along US 15 from Williamsport to the New York border. This portion of US 15 is upgraded to Interstate Highway standards in anticipation of the I-99 designation . Signs have been erected along the present US 220 and US 15 between Bellefonte and Corning—much of which are built to Interstate Highway standards—marking the route as the "Future I-99 Corridor".[22] Some of this section of road has also received exit number designations. The entirety of US 15 north of Williamsport is a limited-access highway.

During a 2002 task force meeting for I-99, it was suggested that I-390, which extends north from I-86 24 miles (39 km) west of the I-86/I-99 junction near Corning and which crosses I-90 and terminates in the greater Rochester metropolitan area, be redesignated as I-99 once the I-80 to I-86 portion of that route is completed. The idea posits that I-390 is a logical extension of the I-99 corridor because I-99's predecessor, U.S. Route 15, originally extended to Rochester. No official moves to accomplish this have been forwarded, however.[23]