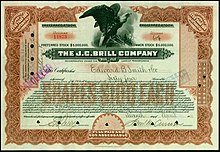 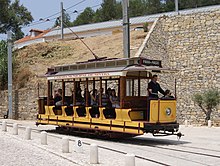 A 1903 Brill-built streetcar on a heritage streetcar line in Sintra, Portugal in 2010

The company was founded by John George Brill in 1868 as a horsecar manufacturing firm in Philadelphia. Its manufacturing factory complex was located in Southwest Philadelphia at 62nd St and Woodland Avenue adjacent to the Baltimore and Ohio Railroad tracks.[2] Over the years, it absorbed numerous other manufacturers of trolleys and interurbans such as Kuhlman in Cleveland and Jewett in Indiana. In 1944, with business diminishing, it merged with the American Car and Foundry Company (ACF) to become ACF-Brill. Although the company ceased production in 1954, some of its interurbans served the Philadelphia area until the 1980s.

In 1902, Brill bought out the American Car Company; in 1904 G. C. Kuhlman Car Company and John Stephenson Company; and in 1907 Wason Manufacturing Company. Brill acquired a controlling share of the Danville Car Company in 1908, dissolving it in 1911, and Canadian railway car builder Preston Car Company in 1921, which ceased operating in 1923.

As large orders continued to be won by Brill, new facilities including steel forges and cavernous erecting shops continued to be added in Philadelphia. One particularly large order, received in 1911, was for 1,500 streetcars for the Philadelphia Rapid Transit Company. It took two years to build those trolleys with delivery rates at times exceeding a hundred cars a month. All told, more than 30,000 rail vehicles were produced at the Brill plant. In its best years, a workforce of 3,000 Philadelphians was employed by Brill; many of those were skilled laborers and craftsmen.[4][full citation needed]

The last rail cars built by J.G. Brill were 25 streamliners for Atlantic City in 1939, and a final 10 trolleys for Red Arrow Lines two years later. Production shifted to rubber-tired vehicles, with more than 8,000 gasoline- and electric-powered buses (trolley buses) built in the 1940s. But by the early 1950s even the bus orders had dried up. In March 1954, the plant was sold to the Penn Fruit Company and a strip mall was built on the eastern end of the site.[citation needed]

In 1926, American Car and Foundry Company acquired a controlling interest in what had become the Brill Corporation. The new structure consisted of:

In 1944, these two companies merged, forming the ACF-Brill Motors Company.[5]

In the same year, ACF-Brill licensed Canadian Car and Foundry of Montreal to manufacture and sell throughout Canada motor buses and trolley coaches of their design as Canadian Car-Brill. The firm built about 1,100 trolley buses and a few thousand buses under the name. Brill had earlier (in 1908) established a company in France (Cie. J.G. Brill of Gallardon, which was sold to Electroforge in 1935).[3]

The streamlined interurban railcar Bullet from the P&W line. With a top speed at 92 mph (148 km/h) it was a forerunner of high-speed rail. No. 206 on display at Steamtown in Scranton, Pennsylvania.

The lines that operated interurban passenger cars recognized in the mid-1920s that they needed faster, quieter, more power-efficient equipment. Until then, the wooden and most of the steel interurban cars were large, sat high, and were heavy. Streetcars were slow, noisy, and clumsy to operate using the motor controller "stand" of the time. Car manufacturers such as Cincinnati Car Company (who already in 1922 made a lightweight, albeit slow, interurban), St. Louis Car Company, Pullman, and Brill worked to design equipment for a better ride at high speed, improved passenger comfort, and reduced power consumption. This particularly involved designing low-level trucks (bogies) able to handle rough track at speed. Brill, in conjunction with Westinghouse and General Electric, worked on a new interurban design and on a new streetcar design (the PCC).

The interurban design result was the aluminum-and-steel, wind-tunnel-developed, slope-roof "Bullet" multiple-unit cars, the first of which were purchased in 1931 by the Philadelphia and Western Railroad, a third-rail line running from 69th Street Upper Darby to Norristown in the Philadelphia region.[6] This line still runs as SEPTA's Norristown High Speed Line. The Bullets could attain speeds as high as 92 mph (148 km/h).[10] They were very successful, and operated until the 1980s, but Brill sold few others. Only the central New York state interurban Fonda, Johnstown, and Gloversville Railroad ordered Bullets, albeit a single-ended, single-unit "trolley-ized" version. Five were procured in mid-Depression 1932 for passenger business that was rapidly declining. In 1936, the closing FJ&G sold these Bullets to the Bamberger Railroad in Utah, which ran them in high-speed service between Salt Lake City and Ogden until the mid-1950s.[3]

Brill look-alike cars in the 2010s

Since 2015 the JR Kyushu, one of the constituent companies of Japan Railways Group, has operated the Aru Ressha "sweet train", a deluxe excursion train. It comprises two power cars and two newly built trailer cars based on a luxury Brill car the railway ordered in 1908 but never used. Scale models of the original cars were used to derive the design.