The Jaguar C-Type (officially called the Jaguar XK120-C) is a racing sports car built by Jaguar and sold from 1951 to 1953. The "C" stands for "competition".

The car used the XK 120 running gear of the contemporary road proven XK120 in a lightweight tubular frame designed by Jaguar Chief Engineer William Heynes with an aerodynamic aluminium body jointly developed by William Heynes, R J (Bob) Knight and later Malcolm Sayer. A total of 53 C-Types were built, 43 of which were sold to private owners mainly in the US.[1]

The road-going XK120’s 3.4-litre twin-cam, straight-6 engine produces between 160 and 180 bhp (134 kW). The C-Type version was originally tuned to around 205 bhp (153 kW). The early C-Types were fitted with SU carburetors and drum brakes. Later C-Types (mid 1953) are more powerful, using triple twin-choke Weber carburettors and high-lift camshafts. They are also lighter, and from mid 1953 braking performance was improved by disc brakes on all four wheels. The lightweight, multi-tubular, triangulated frame was designed by Heynes. Heynes, Knight and Sayer together developed the aerodynamic body. Made of aluminium in the barchetta style, it is devoid of road-going items such as carpets, weather equipment and exterior door handles. According to the Jaguar Heritage Registry the cars were produced between May 1952 starting with XKC001 and ending August 1953 XK054. The original alloy body was marked with the prefix K (e.g. K1037). 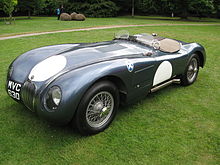 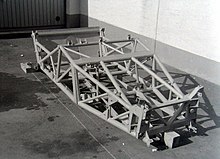 The C-Type was successful in racing, most notably at the Le Mans 24 hours race, which it won twice.

In 1951, the car won at its first attempt. The factory entered three, whose driver pairings were Stirling Moss and Jack Fairman, Leslie Johnson and triple Mille Miglia winner Clemente Biondetti, and the eventual winners, Peter Walker and Peter Whitehead. The Walker-Whitehead car was the only factory entry to finish, the other two retiring with lack of oil pressure. A privately entered XK120, owned by Robert Lawrie, co-driven by Ivan Waller, also completed the race, finishing 11th.[1]

In 1952, Jaguar, worried by a report about the speed of the Mercedes-Benz 300SLs that would run at Le Mans, modified the C-Type’s aerodynamics to increase the top speed. However, the consequent rearrangement of the cooling system made the cars vulnerable to overheating,[2] and all three retired from the race. The Peter Whitehead-Ian Stewart and Tony Rolt/Duncan Hamilton cars blew head gaskets, and the Stirling Moss-Peter Walker car, the only one not overheating having had a full-sized radiator hurriedly fitted, lost oil pressure after a mechanical breakage.[3] Testing by Norman Dewis at MIRA after the race proved that the overheating was caused more by the revisions to the cooling system than by the altered aerodynamics: the water pump pulley was undersized, so it was spinning too fast and causing cavitation; also the header tank was in front of the passenger-side bulkhead, far from the radiator, and the tubing diameter was too small at 7/8 inch. With the pump pulley enlarged, and the tubing increased to 1 1/4 inch, the problem was eliminated. The main drawback of the new body shape was that it reduced downforce on the tail to the extent that it caused lift and directional instability at speeds over 120 mph (193 km/h) on the Mulsanne Straight. These cars had chassis numbers XKC 001, 002 and 011. The first two were dismantled at the factory, and the third survives in normal C-type form.

Further weight was saved by using a rubber bag fuel tank ... lighter electrical equipment and thinner gauge steel for some of the chassis tubes ... [T]he most significant change to the cars were the triple Weber carburetors and [switch to] disc brakes.[5]

Disc brakes were novel in 1953, and Jaguar's win, partly due to their superiority, set off a scramble to include discs in production cars.

1954, the C-Type's final year at Le Mans, saw a fourth place by the Ecurie Francorchamps entry driven by Roger Laurent and Jacques Swaters.[1]