The Jaguar Mark IX is a four-door luxury saloon car announced 8 October 1958[4] and produced by Jaguar Cars between 1958 and 1961. It was generally similar to the Mark VIII it replaced, but had a larger, more powerful 3.8 litre engine, 4-wheel disc brakes, and power assisted recirculating ball steering among its mechanical improvements.

Visually the early versions were identical in exterior appearance to the Mark VIII except for the addition of a chrome "Mk IX" badge to the boot lid. Later versions had a larger tail-lamp assembly with an amber section for traffic indication, visually similar to the tail-lights of the smaller Jaguar Mark 2.

It was replaced by the lower and more contemporary-styled Mark X in 1961. 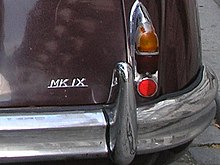 Internally, an enlarged-bore 3.8 L (231 in³), 220 bhp (164.1 kW) DOHC straight-6 replaced the previous 3.4 L (210 in³) 190 bhp (141.7 kW) unit. The B-type head of the Mark VIII was retained, but with a chamber at the bottom of the combustion chamber to accommodate the enlarged bore. Twin HD6 1.75" SU carburettors were fitted. A smaller electromagnetically controlled auxiliary carburettor was placed between the main pair of carburettors to act as a choke. It often proved troublesome in operation and many were converted to manual switching . Standard compression ratio was 8:1, but a higher performance 9:1 compression ratio was also available, as was a 7:1 compression ratio for export markets, such as Africa, where quality of petrol was sometimes a problem.

The Mark IX was the first production Jaguar to offer four-wheel servo-assisted Dunlop disc brakes and recirculating ball power steering, which were now standard equipment. The brake system included a vacuum reserve tank to preserve braking in the event that the engine stalled. Automatic transmission were fitted with a hill-holding "anti-creep" feature, where an electromagnetic valve maintained brake pressure at rest when the brake pedal was released to prevent the car from rolling back on an incline.

The power steering was driven by a Hobourn-Eaton pump, operating at 600-650 psi. It was attached to the back of the generator and allowed the steering to be geared up to 3.5 turns lock-to-lock as against the 4.5 turns for the Mark VII and VIII models.

Unlike the early automatic Mark VII predecessor, (but like late mark VII and all Mark VIII) the Borg Warner DG automatic gearbox started in first gear and had a dash-mounted switch to allow second gear to be held indefinitely. Once in third gear, a series of clutches engaged to allow direct drive rather than through the torque converter.

The torsion bar independent front suspension and leaf-sprung rear live axle were retained from the Mk VIII, which, in turn, was first used in the 1949 Mark V.

The sunshine roof became a standard fitting for the UK market. The interior was luxurious, with extensive use of leather, burled walnut and deep pile carpet. A range of single and twin-tone paint schemes was offered. 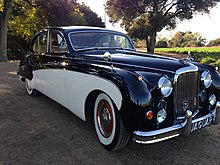 The Mark IX was popular as a state car. When Charles de Gaulle paid a state visit to Canada in 1960, the official cars for the motorcade were Mark IX Jaguars. The British Queen Mother had a Jaguar Mark VII, which was progressively upgraded to be externally identical to the later Mark IX. The Nigerian government bought forty Mark IXs, painted in state colours of green and white. The large Jaguars of the 1950s were sufficiently popular in western Africa that "Jagwah" survives as a colloquialism for "smart man-about-town".[citation needed]

In the luxury car market, the Jaguar Mk IX was very competitively priced, selling for £1995 with manual gearbox, £2063 with overdrive, and £2163 with automatic transmission, which was less than half the price of similar competitors. In all, 10,009 were produced.[1]

The Mark IX's power and good brakes for a vehicle of the era, together with its impressive aesthetic appearance, make it a common choice for classic car circuit racing, such as at the Goodwood Circuit's Revival meetings.[citation needed]