The Jaguar XKSS is a road-going version of the Jaguar D-Type racing car, initially built in 1957. A small production run by Jaguar produced replicas of the remaining 9 of the scheduled production of 25 XKSS, launched in 2016.[1] 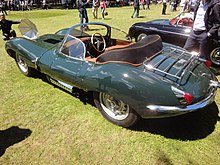 Following Jaguar's withdrawal from competition at the end of the 1956 season, a number of completed and partly completed D-types remained unsold at the Browns Lane factory. In an attempt to recoup some of the investment made in building these unused chassis, and to exploit the lucrative American market for high-performance European sports cars, Sir William Lyons decided to convert a number to road-going specification. Only minor changes were made to the basic D-type structure: the addition of a passenger side door; the removal of the large fin behind the driver; and the removal of the divider between passenger and driver seats. In addition, changes were made for cosmetic, comfort and legal reasons: a full-width, chrome-surrounded windscreen was added; sidescreens were added to both driver and passenger doors; a rudimentary, folding, fabric roof was added for weather protection; chromed bumpers were added front and rear (a styling cue later used on the E-type); XK140 rear light clusters were mounted higher on the wings; and thin chrome strips were added to the edges of the front light fairings.

On the evening of 12 February 1957, a fire broke out at the Browns Lane plant destroying nine of the twenty-five cars that had already been completed or were semi-completed. Most of the surviving 16 XKSSs were sold in the US. 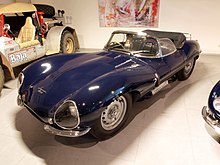 XKSS at the Louwman Museum

In March 2016, Jaguar announced that it would be completing the original 25 car order from 1957 by building high-quality XKSS replicas to make up the remaining 9 chassis numbers of cars destroyed by the plant fire. The cars are expected to sell for more than £1 million each.[2]

The American actor Steve McQueen owned a Jaguar XKSS for personal use, painted British racing green. He referred to the car as the "Green Rat".[3][4] In 2010 and 2011 it toured the United States as part of the "Allure of the Automobile" exhibit. Steve McQueen's XKSS is currently on display in Los Angeles, California at the Petersen Automotive Museum.[5]

Another XKSS, along with a D-type and C-type, formed the pinnacle of the James Hull collection, a collection of 450 British cars sold for an estimated £100 million in 2014.[6] Other XKSS include XKSS 722 at the Louwman Museum in The Hague.[7]