JAWA (Czech pronunciation: [java]) is a motorcycle and moped manufacturer founded in Prague, Czechoslovakia in 1929 by František Janeček,[4] who bought the motorcycle division of Wanderer. The name JAWA was established by concatenating the first letters of Janeček and Wanderer.[5] In the past, especially in the 1950s, JAWA was one of the top motorcycle manufacturers and exported its 350 into over 120 countries.[6] The best known model was the 350 Pérák and in the 1970s the 350 Californian. It appeared in the typical black and red coloring from Californian beaches to New Zealand.[7] After 1990, there was a significant loss of production. A successor company was formed in 1997 in Týnec nad Sázavou, continuing the name as JAWA Moto.

JAWA motorcycles got a resurrection in India in December 2018, by Classic Legends which is owned by Mahindra, through a licensing deal with the JAWA Moto.[4] 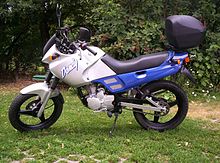 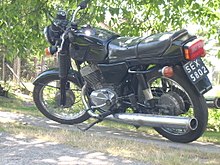 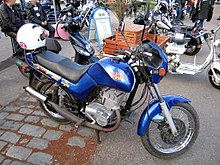 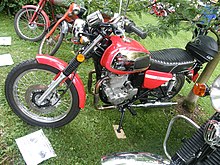 František Janeček started the company after working for several years in the armament industry. Although he didn't have any experience with motorcycles, he was familiar with production techniques. Janeček chose between the Austrian double piston two-stroke motor of Puch, the Berlin two-stroke of Schliha, and the new Wanderer 500 cc. Janeček chose the Wanderer. Because of the collapse of the German motor industry, Wanderer had already decided to stop the production. This is because they didn't think it would be profitable to directly compete with BMW. The first model was introduced on October 23, 1929. This was a 500 cc 4-cycle engine with 12 kW of power (18 hp) and fuel consumption of 6 liters per 100 km. Although priced highly, through the first years (and several constructional fixes) this motorcycle was successful and was considered reliable.

Due to the economic recession of the early 1930, a cheaper and simpler motorcycle was needed. Year 1932 marked the introduction of JAWA 175, with its 3.6 kW engine. This light (70 kg) machine was capable of speeds up to 80 km/h and fuel consumption of 3.5 liters per 100 km. The first year of production was an immediate success, selling over 3000 of the JAWA 175, almost three times the number of the 500 cc model over three years of production. The production of this model was finally stopped 1946. In 1938 JAWA was the first to offer test rides during exhibition show. This test motorcycle was a custom JAWA 175 equipped with dual handlebars, second pair being in the back for the instructor. Over the years total of 27,535 units of the JAWA 175 were built. It had a high demand.

Motorcycles produced in the 1950s include the 250, 350/353-kývačka, and 350/354-Kývačka, 500 OHC and the 50 Pionýr and Jawetta mopeds. A powerful 2-stroke motorcycle known as the JAWA 250/350 with the compact engine, rear wheel suspension and many other innovations was exported to more than 120 countries worldwide. It was one of the most successful models of JAWA.

In the early 1960s, Jawa invented as the first in the world an automatic clutch for motorcycles. The automatic centrifugal clutch was designed for Jawa 250/559 and 350/360. Because the clutch has been patented worldwide by Jawa and it was copied in the Honda 50 Cub motorcycle, Honda had to retreat, pay a fine and pay a license fees from each motorcycle sold.[8]

In 1934 Jawa introduced its first car, the Jawa 700, which was based on the DKW F2.[9] Produced was overall 1,002 vehicles. The sports car special was built only in six pieces for the 1000-mile Czechoslovakian race in 1933-35. It is a legend in the history of domestic motor sports. In 1937, the modified Jawa 600 Minor was introduced, which replaced JAWA 700. Production continued in limited numbers throughout WWII, and some were assembled in the immediate postwar period.[10] Over 14,000 vehicles were produced and more than half were exported abroad. The successor was Aero Minor, that was however manufactured by Aero and not by Jawa, from 1946 to 1952.

Under the name Jawa were in foreign markets sold a variety of mopeds with two-stroke engines. In Czechoslovakia (and foreign markets after 1989), these mopeds were known as Babetta. The mopeds were produced since 1970 in Slovakian Považská Bystrica and Kolárovo. It was the first company to include electronic ignition on mopeds. In the first half of the 1990s, sales and exports gradually began to decline and the production of all Babetta types was definitely discontinued in 1999. 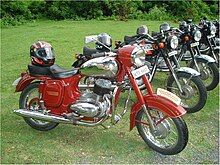 Ideal Jawa India Ltd based in Mysore was an Indian motorcycle company, which produced licensed Jawa motorcycles beginning in 1960 under the brand name Jawa and from 1973 as Yezdi. The company stopped production in 1996. Jawa motorcycles have a cult following to this present day. Earlier models were manufactured in Czechoslovakia and bore the CZ Jawa emblem on the side of the fuel tank. The locally manufactured models always had O within the Jawa emblem. The Jawa 250 Type 353/04 designated as 'A' Type, Yezdi 250 'B' Type, Jawa 350 type 634 Twin and Yezdi 250 Monarch models are driven to this day in various parts of the country. Jawa and Yezdi bikes, especially the ones with fuel tank paddings and ignition systems on the fuel tank are now collectors items.

In October 2016, Mahindra & Mahindra, through its subsidiary Classic Legends Private Limited (CLPL), signed a licensing deal to launch motorbikes under the JAWA brand name in India and some other East Asian countries.[11] In November 15, 2018, the Classic Legends launched three motorcycles in India: Jawa 300, Jawa 42 and Jawa Perak. They are manufactured in Pithampur.[12]

The is inspired by the company’s popular classic Jawa 250, while the is a more modern and urban offering. The , however, is a completely different model, a custom bobber motorcycle. Jawa 300 and Jawa 42 share the same technical specifications - 293cc (20,4 kW), front disc, rear drum, single channel ABS, fuel injection system, liquid cooled engine with radiator and kerb weight of 170 kg. In terms of appearance, classic Jawa has more of chrome while the Jawa 42 has a modern feel to attract younger riders. It is a competitor to the Royal Enfield bikes in Indian markets.[citation needed] Jawa Perak has 334cc (22,3 kW) engine.

Indian customers' interest in new machines exceeded all expectations. The originally planned production capacity was not enough, the production line was therefore doubled at about 30,000 motorcycles a year and the start of serial production had to move on to later.[13] JAWA Motorcycles (Classic Legends) inaugurated the first Jawa dealership in December 2018 in the Pune region of Maharashtra.

They launched an initiative #ForeverHeroes to lend a helping hand to the children of martyrs, by auctioning the first 13 motorcycles from its production batch. This fundraiser was a first-of-its-kind event which helped Jawa raise a staggering Rs 1,49,25,000 from just 13 bikes. The entire amount received in the fundraising auction will be utilized towards education for the children of martyrs of the Indian Armed Forces.[14]

Historically JAWA had been very active in racing, and by far the most active East-European manufacturer in mechanical sports. In track racing JAWA sustained a presence in the World Championship until the mid-sixties with respectable performances considering their limited budget. In Motocross the firm built an impressive record before its four-stroke engines became superseded by two-stroke engines. In speedway racing, dirt track racing and ice racing where four-stroke engines were still at an advantage, the firm remained a dominant force. The separate factory where these competition motorcycles were built became a separate company following the privatizations of the 1990s with the fall of Communism.

Following the dissolution of Czechoslovakia and the dismantling of the communist bloc, the Jawa consumer motorcycles and the Speedway competition bikes were divided into separate companies. In the nineties, JAWA Speedway bikes were successful, while the Jawa company has struggled. As of 2006 the JAWA mostly produced bikes similar to Honda 250 cc, 125 cc and 50 cc motorcycles and large bike with a 650 cc Rotax engine (this engine can be also found in BMW F650 series).

Most sold is the iconic 350 cc two-stroke twin, which is almost mechanically unchanged since the 1970s but very reliable, currently are successfully sold mainly to the countries of Latin America.[17]

The large bike with 650 cc Rotax engine was coming in three different variations. JAWA 650 classic was a retro bike with classic proportions. JAWA 650 Style was aimed for city streets and finally JAWA 650 Dakar was a full-scale enduro bike similar to Honda XL Transalp. The Jawa 660 was the successor to the Jawa 650, it was sold between 2011-2018.