Skip to content
Not to be confused with Kentucky Motor Speedway (short track), a short track at Whitesville, Kentucky, opened in 1960, 3⁄8 mi (0.60 km).
Motorsport track in the United States

Kentucky Speedway is a 1.5-mile (2.4 km) tri-oval speedway in Sparta, Kentucky, which has hosted ARCA, NASCAR and Indy Racing League racing annually since it opened in 2000. The track is currently owned and operated by Speedway Motorsports, Inc.. Before 2008 Jerry Carroll, along with four other investors, were the majority owners of Kentucky Speedway. Depending on layout and configuration the track facility has a grandstand capacity ranging between 69,000 and 107,000. 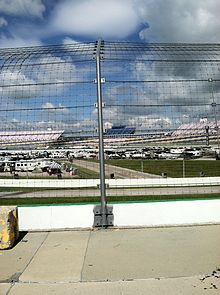 View of the track from outside turn 3

Several months later, the speedway decided to resurface the track because of bumps in the surface from winter. On June 16, 2000, the speedway opened with a Slim Jim All Pro Series event. One day later, the speedway held its first major series, the Craftsman Truck Series, which was won by Greg Biffle.[3][4] In August of the same year, Buddy Lazier won the inaugural IndyCar Series race. On August 29, 2000, NASCAR announced that Kentucky Speedway would also sanction a Busch Series (now Xfinity Series) race in 2001. One year after the speedway opened, it held its first Busch Series event, with Kevin Harvick emerging as the winner.[4]

During the 2002 Infiniti Pro Series (now Indy Lights) race at the track, Jason Priestley suffered a concussion and fractures to his thoracic spine and feet, becoming the first major injury to occur at the speedway. Three years later, Carroll began his efforts to receive a Nextel Cup Series event at the track. While trying to do so, Kentucky Speedway filed an anti-trust lawsuit against NASCAR and the International Speedway Corporation (ISC).[4] The reason for the lawsuit was the claim that both companies violated federal antitrust laws because of restricting the awarding of Nextel Cup Series events.[5] The lawsuit continued for three years before concluding in January 2008 with Judge William O. Bertelsman dismissing the trial with ISC and NASCAR winning the lawsuit. Following the dismissal, Judge Bertelsman commented, "After careful consideration and a thorough review of the record, and granting Kentucky Speedway the benefit of the doubt on all reasonable inferences therefrom, the court concludes that Speedway has failed to make out its case."[6]

The speedway continued playing host to Camping World Truck Series, Nationwide Series, IndyCar, and Firestone Indy Lights Series events through 2010 and further. In 2010, both former owners of the speedway reached a settlement, ending the lawsuit.[4] In August 2010, it was announced that the speedway would hold its inaugural NASCAR Cup Series event, the Quaker State 400, during the 2011 season.[9] Before the first NASCAR Cup Series event, Kentucky Speedway expanded the capacity of the track from 66,000 to 107,000.[9] The speedway also reconfigured pit road, and added 200 acres of camping.[9]

The inaugural Quaker State 400 was held on July 9, 2011 and was won by Kyle Busch. However, the race was overshadowed by numerous logistical problems. A massive traffic jam on Interstate 71 resulted in as many as 20,000 people being unable to get to the race. The traffic situation was so severe that at least one driver (Denny Hamlin) nearly missed the pre-race drivers' meeting. Many fans still en route by the halfway point of the race were asked to turn back in order to make it easier on those leaving the race. Speedway Motorsports admitted that it had not anticipated the sheer number of fans attending the event (the increased capacity notwithstanding) and had not made any significant upgrades to the infrastructure in and around the facility. Speedway officials apologized for the snafu and allowed those who didn't get in to redeem their tickets at Speedway Motorsports' other tracks for the rest of the season, or the 2012 Quaker State 400. In late 2011, the speedway purchased a 170-acre farm adjacent to its original property which was converted to parking. The purchase was a portion of more than 300 acres of land the speedway converted to parking. Additionally, speedway management began to work with the state government and police to improve event ingress and egress in time for the 2012 race.[10][11][12][13] 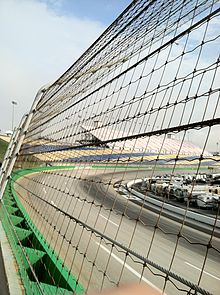 This is the early morning hours of race day at Kentucky Speedway. 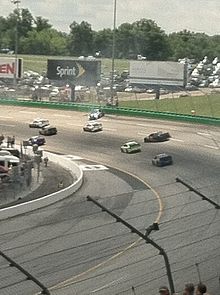 In 2012 for the first time since the track opened, Kentucky Speedway did not host an IndyCar event. Brad Keselowski went on to win the second NASCAR Cup Series race ever held. Also in 2012 the Camping World Truck Series lost one of its two dates, focusing solely as part of the triple-header that headlines the Cup race. For 2013, the Cup race was postponed from Saturday night to Sunday afternoon due to rain and Matt Kenseth went on to win the third ever Cup race, the only time the race has been held in daylight. In addition the speedway also gained a second NASCAR Xfinity Series race that was also 300 miles but would be run in September. Ryan Blaney, the son of NASCAR driver Dave Blaney pulled off an upset by winning that event. By 2014, NASCAR had become a staple for the track with drivers praising the roughness and age of the track. Brad Keselowski won the Cup race in 2014 from the pole and leading an unheard of 199 of the 267 laps, becoming the first driver to win two Cup races there, and Kyle Busch the inaugural winner would become the second driver to do so in 2015 that started a three-consecutive win streak. The 2015 running marked the first race using NASCAR's low downforce package and the last race for Jeff Gordon there since he was retiring. Gordon was looking to scratch Kentucky off the list, but he failed to do so with a seventh-place finish, leaving the track as the only facility he failed to win in his illustrious career, but Busch went on to win the NASCAR Cup Series Championship.

In December 2015 it was announced that in 2016 the speedway would be repaved and partially reconfigured. This was necessary to fix drainage issues after a rain-plagued 2015 weekend, when "weepers" from water being pushed up interfered with track drying efforts. In addition, turns 1 and 2 were changed, with the width of the track narrowed from 72 to 56 feet to give cars coming out of the pits a wider apron, and the banking increased from 14 to 17 degrees. Turns 3 and 4 remained 14 degrees. A curing process was used to make the new paving 5 years "seasoned" to give the surface character. Finally, SAFER Barriers were added along the entirety of the outside wall. The completed project was first used in the July 2016 NASCAR weekend, in which Brad Keselowski scored his third win by stretching his last tank of gas to barely beat Carl Edwards. The win gave Keselowski an average of .500 by winning 3 of the 6 races held, and is the only driver that has won at the speedway in even numbered years since the Cup Series arrived (2012, 2014, and 2016). In 2017, Martin Truex, Jr. became just the fourth driver to win the race, and he would go on to win the NASCAR Cup Series Championship.

In 2018, Kentucky lost its standalone Xfinity Series date to the Las Vegas Motor Speedway so Las Vegas could have a second triple header weekend in the fall.[14] The 2018 tripleheader race weekend kicked of with the Thursday night NASCAR Camping World Truck Series (NCWTS) race. The race, which was won by Louisville native Ben Rhodes, marked the first Truck Series win by a driver from Kentucky since Michael Waltrip's 2011 Daytona Truck win. The other two races that weekend were both won by Toyota drivers. Christopher Bell won the Xfinity Series race after spinning in qualifying and Martin Truex Jr. won the 2018 Quaker State 400 for back-to-back Cup Series wins at Kentucky. Truex's win also marked the last win for Furniture Row Racing before the team closed shop at the end of 2018 after facing financial and sponsorship related issues.

In the 2019 Quaker State 400, Kurt Busch became the first and currently only Chevrolet driver to win at Kentucky.[15]

In May 2021, Ford parked thousands of newly-built Super Duty pickup trucks at the speedway due to a global shortage of semiconductor chips.[18]