Kenworth Trucks, Inc., is an American manufacturer of medium and heavy-duty Class 8 trucks with offices based in Kirkland, Washington, a suburb of Seattle. It is a subsidiary of Paccar.[1]

Kenworth was founded in Seattle, Washington in 1912 by brothers George T. and as a car and truck dealership known as Gerlinger Motors. In 1914, they decided to build their own truck with a more powerful inline six-cylinder engine, the first put into a commercial truck. The Gersix, as it was known when introduced in 1915, was framed in structural steel, which along with its power, made the truck ideal for logging[2] in the rugged Northwest.[3] In 1916 the company moved to Tacoma, Washington, where Seattle businessman Edgar K. Worthington was managing his mother's commercial building. He became intrigued by the Gerlinger company, which was doing quite well, or so it seemed, as the Gersix became a popular fixture in the Northwest.[4] In 1917 Worthington and his business partner Captain Frederick Kent bought the business, renaming it the Gersix Motor Co.[4]

In 1919 Kent retired from the business, and his son Harry Kent became Worthington's new partner.[4] In 1922, Gersix made 53 trucks at its factory on Fairview Avenue at Valley Street. Under the new name, the company moved to 506 Mercer Street and later to 1263 Mercer Street. Trucks and motor coaches were assembled in individual bays rather than on a conventional assembly line.[5] In 1923 Kent and Worthington reincorporated the business as the Kenworth Motor Truck Company, a combination of the names "Ken" and "Worth". In 1926 they started making buses, and in 1933 Kenworth was the first American company to offer diesel engines as standard in their trucks.[4] In 1945 Kenworth was bought by The Pacific Car and Foundry Company.

The 1970s television series "Movin On" featured a Kenworth tractor, as did “BJ and the Bear”. In the 1989 James Bond movie Licence to Kill, Bond drives a Kenworth W900B semi-truck as he duels drug dealer Franz Sanchez. The maximum legal load is 80,000 pounds (36,000 kg). 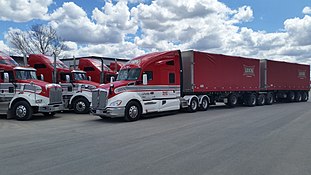 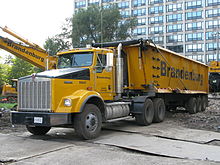 As of November 2015, Kenworth's US and Canada product line includes:

In the early 2000s Kenworth introduced to Mexico the T604, based on the Australian T604 with a few modifications, mostly in the hood.[citation needed]

The headquarters for Kenworth Australia is located in Bayswater, Victoria where all Australian models are assembled. The first Kenworth model in Australia was the KWS925, imported fully built in 1962. Soon later, Kenworths were imported in complete knock-down kits and assembled in Preston, Victoria.[8] Australian built Kenworth models are also exported to nearby RHD markets in New Zealand and Papua New Guinea.[citation needed]

Kenworth Australia started building the new range of trucks tying in their 2008 release with the model range being the '08 Series'. This includes the following conventional (bonneted) models; in approximate order of smallest to largest: the T358/A, T408SAR, T408, T608, T658, T908 and C508. The only cab over truck built was the K108, which was very popular in the B-Double market segment owing to its shorter length.[citation needed] 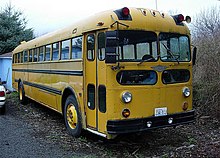 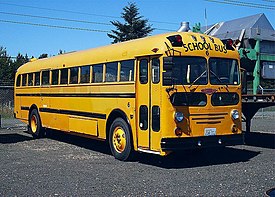 A retired 1955 Kenworth T-216 "Pacific School Coach" formerly from Cathlamet, Washington, is seen here in a photo taken after restoration has commenced. Compare with above image, of same bus, taken in March 2007.

Kenworth's role in the transit and school bus industry has largely been forgotten. This is likely due to a number of factors including Kenworth's current status as a leading manufacturer of Class 8 heavy-duty semi trucks, and the fact that hardly any examples of Kenworth-built buses exist today (with exception of a few surviving model CT-73 "Pacific School Coach" buses and one remaining "Bruck").

In light of that fact, and having been a major builder of transit and school buses, interest in the history and preservation of the Pacific School Coach (as well as Kenworth's involvement in the transit and bus industry as a whole) has increased in recent years, especially in the Pacific Northwest where Kenworth's buses were most commonly found. The Gillig Transit Coach / Pacific SchoolCoach Online Museum, a website focusing on preserving Gillig's line of earlier-built school buses, was expanded shortly after its 2001 launch to include the history of the Kenworth-Pacific SchoolCoach. It has since expanded even further to include the entire history of Kenworth's involvement in the public transportation industry, as well as their local dominance in the school bus industry throughout the 1950s.

The brand claims to maintain an image of high quality, it has won five of six JD Power Awards in 2005, and was a clear sweep in the 2007 J.D. Power Awards for Heavy Duty Truck Product Satisfaction.[14][full citation needed]