Kristianstad (UK: /ˈkrɪstʃənstɑːd/,[2] Swedish: [krɪˈɧǎnːsta, -ɑːd];[3] older spelling from Danish Christianstad) is a city and the seat of Kristianstad Municipality, Skåne County, Sweden with 40,145 inhabitants in 2016.[1] During the last 15 years, it has gone from a garrison town to a developed commercial city, today attracting visitors in the summertime mainly from Germany, Denmark and The Netherlands.[citation needed] 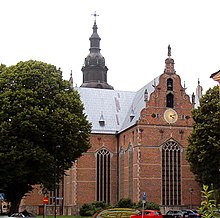 The city was founded in 1614 by King Christian IV of Denmark, the city's name literally means 'Town of Christian', as a planned city after the burning of the nearby town of Vä and moving the city rights of the neighbouring town of Sölvesborg and Åhus to the new town. The purpose of the town was to safeguard the eastern half of the Danish province of Scania against any future raids from Sweden in the north, but also as a symbol of the power of Christian himself. One of these raids had sacked the nearby town of Vä in 1612. Vä then lost its charter and the people were moved to the new, better fortified city. The king also founded the town of Christianopel in eastern Blekinge to serve a similar purpose.

Construction of the towns was a great prestige project for the king, and Kristianstad's church (Danish: Trefoldighedskirken; Swedish: Heliga Trefaldighetskyrkan) is considered by many to be one of the most beautiful buildings constructed by King Christian IV, or even northern Europe's most beautiful Renaissance church. This meant that the church was built considerably larger than there was initially use for. The king also wanted castle or fortress constructed inside the town but shortage of funds made this impossible, of the intended castle only an arsenal was constructed which today serves as the main building of the local museum. Also in Christianstad the town planning of the Renaissance could be laid down for the first time at the foundation of the town. This makes the Kristianstad town centre of today exceptionally well-kept and easy to get around in.

Short-lived Danish capture of Kristianstad during the Scanian War (1676), painting by Claus Møinichen.

Pylyp Orlyk was after 1709 chosen as a Hetman in exile by the cossacks and the Swedish king Charles XII. While in Bender Orlyk wrote one of the first state constitutions in Europe. This Constitution of Pylyp Orlyk was confirmed by Charles XII and it also names him as the protector of Ukraine. After 1714 Orlyk now together with several other cossacks followed the Swedish king Charles XII to Sweden. Orlyk with his family and about 40 other Cossacks arrived in Ystad, Sweden in late November 1715. After some months in Ystad they lived in the city of Kristianstad for some years.[4] Orlyk wrote numerous proclamations and essays about Ukraine including the 1710 Constitution of Pylyp Orlyk.[5]

Kristianstad served as capital of Kristianstad County between 1719 and 1997. It now houses the administration and the regional parliament of the Skåne Regional Council. For a long time Kristianstad also was a very important garrison town, the A3 Wendes Artillery Regiment and the P6 South Scanian Infantry Regiment being the towns most prominent military units. Also the town housed for many years the so-called Scanian Fortification Brigade. The Wendes Artillery Regiment served with distinction in the Napoleonic Wars. One of Sweden's higher courts of appeal was located in Kristianstad before being moved to Malmö in 1917.

Sweden's lowest point, at 2.41 meters below mean sea level, is located in Kristianstad. Because of this, parts of the city have to be protected from flooding by a system of levees and water pumps. To expand the city, large areas of low-lying wetlands have had to be walled in, especially to the east. To prevent future flooding of the city center, the existing levees are in the process of being reinforced and new levees against both Helge å and are under construction. An extensive system of ponds and dams is also under construction. The threat of flooding became substantial during late winter 2002, when the greater part of the public park was under water.[6] However, the wetlands around the city are starting to be regarded more as an asset, not least thanks to the creation of Kristianstads Vattenrike Biosphere Reserve.[7] Today the Vattenriket is a Unesco biosphere reserve.

Kristianstad has a humid continental climate. Summers are warm and comparatively long by Swedish standards.

Kristianstad has by now crossed a vital threshold, as the city and adjacent municipality, with a population of 80,000, in essence use no oil, natural gas or coal to warm homes and businesses, even throughout the extensive chilly winters. It is an absolute turnaround from 20 years ago, when all of its heating came from fossil fuels.[10]

Absolut Vodka, owned by Pernod Ricard, is produced by the town of Åhus located within the municipality. Kristianstad was the main military seat in Scania for a long time, boosting military camps and trainings. After the reforms and military cutbacks of the 1990s all of these have been closed, although a new military presence is being established in nearby Rinkaby which holds an old military training ground. Also in and around Kristianstad are numerous enterprises concerned with agriculture and it is usually said that every Swede everyday eats something produced from Kristianstad. At the old garrison ground for the P6 South Scanian Infantry Regiment (later mechanized) there is today the local Kristianstad University which is specialized in educating teachers and nurses.

The Swedish Film industry (Svensk Filmindustri) commenced its activities in Kristianstad in the 1910s,[citation needed] before moving to Stockholm in 1920. Today the old studio is a museum.

The 2011 World Scout Jamboree was held near Rinkaby, in Kristianstad municipality. Also every summer there is a huge beachhandboll tournament in Åhus.