Lifan Industry (Group) Co., Ltd. (Lifan Group or Lifan,[3][4] Chinese: 力帆, lit. "Power Sail") is a civilian owned Chinese motorcycle and automobile manufacturer headquartered in Chongqing, China. It was founded in 1992 and began to manufacture automobiles in 2005, with license-built microvans and a small sedan developed by Lifan.[5]

Lifan was founded by former political dissident Yin Mingshan in 1992 as a motorcycle repair shop with a staff of nine. Mingshan has a long history of conflict with government authority but currently enjoys a positive relationship with the Chinese Communist Party.[7] The company was originally called "Chongqing Hongda Auto Fittings Research Centre".[8] The company was renamed Lifan Industry Group in 1997.[8] It expanded into building buses in 2003.[9] As of 2004, Lifan was being referred to as "the largest private motorcycle manufacturer in China."[10] In 2009, it as the fifth-largest Chinese motorcycle maker.[5]

M/S CHONGQING LIFAN CO., LTD is the subsidiary of M/S LIFAN INDUSTRY (GROUP) CO., LTD. In 2003, Lifan acquired Chongqing Special Purpose Use Vehicle Manufacturing Co Ltd,[6] and 2005 saw the start of automobile production beginning with the LF6361/1010 minivan and pickup based on the 1999 Daihatsu Atrai. In December 2005, Lifan's first independently developed car entered production, the 520 sedan with a Brazilian Tritec engine.[9] As of 2011, Lifan makes a number of consumer offerings including the subcompact 320, the compact sedan and hatchback 520, the mid-sized 620 sedan, and the X60 compact SUV.[11]

Lifan entered into an agreement with Italian motorcycle manufacturer MV Agusta in July 4, 2014, to be MV Agusta's sole distributors in China. Lifan currently have a number of Agusta models on show at selected dealerships, including the F4 RR motorcycle.[13]

In 2004, Lifan was ordered to cease selling motorcycles under the brand name "Hongda"—the culmination of a successful lawsuit brought by Honda Motors.[15] That same year Honda initiated a separate suit against Lifan this time for using badges similar to Honda's on its motorcycle products.[10]

Now boasting motorcycle production bases in Thailand, Iran, Turkey, and Vietnam,[1] Lifan first established a presence in Vietnam in 1999 that made motorcycles and parts.[17] Beginning in March 2007, assembly of the 520 sedan commenced in Vietnam.[6] By mid-2009, the 320, 520i, and 620 had also been built or assembled in this country.[18]

Overseas assembly factories make Lifan-branded automobiles sold to domestic audiences but are not necessarily affiliated with Lifan in any way.

In early 2010, Lifan established an automobile assembly factory in Azerbaijan.[19]

Such assembly has occurred in Egypt.[1]

From 2007 until 2010, the Lifan 520 was assembled in Ethiopia from imported knock-down kits under the name of "Abay" (Amharic for the Blue Nile)[20] by Holland Car Company.[21] Cars assembled in Ethiopia may now bear the Lifan name,[22] and an after sales service center for Lifan automobiles exists in the capital, Addis Ababa, as of 2010.[23] As of 2016, Lifan continues to produce in Ethiopia (perhaps without a local partner), assembling cars with native-born labor from knock-down kits.[24] Five different models can be made at the current facility, set up in 2014, and sales can total fifty cars a month at prices ranging from $15,000 to $30,000.[24]

Assembly of automobiles in Russia began in August 2007,[6] and in early 2011, the 320 model became the third Lifan product to see local production.[26]

At the end of 2006, Lifan held over 3,800 patents, the largest number of any Chinese automobile company,[1] of which at least 346 of were held by Lifan's automobile division.[6] 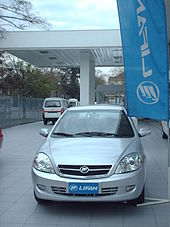 Access to profitable export markets, something the Chinese State allowed the company in 1998,[6] means that this maker of automobiles and motorcycles does what many Chinese automakers desire: it sells in developed overseas markets like the EU, Singapore and Japan.[6]

While finding more markets for its motorcycle-related products, Lifan has exported passenger cars to 51 countries.[6] In 2010, its automotive exports were rivaled by only Chery.[19] The company has sold in many countries and in every continent except Antarctica.[27]

Lifan motorcycles and dirt bikes are available in Canada[27] and Mexico. As of 2009, a single model was on offer in this country.[31]

Some of the cars Lifan exports are in the form of knock-down kits.[25] Put together in small, local workshops, selling such kits is an easy way for the company to gain access to developing markets.

Lifan was formerly the owner of the Chinese super league football team Chongqing Lifan; since 2005 it has been a sponsor of the team.