Blue Bird or Bluebird is the name of various cars and boats used by Sir Malcolm Campbell, his son Donald and other family members to set land and water speed records.

Origins of the name

The name Blue Bird was originally inspired by the play of that name by Maurice Maeterlinck,[1] and the vehicles were painted a shade of azure blue.

Malcolm Campbell had a succession of Darracq racing cars in the 1920s, which in the fashion of the day he had named 'Flapper I' , 'Flapper II' and 'Flapper III' . It was 'Flapper III' which he renamed after seeing the play, famously and impetuously knocking up a paint shop owner at night, so as to purchase blue paint before racing at Brooklands the following day.[2]

In 1925, he also raced an Itala at Brooklands with the name 'The Blue Bird' painted on the bonnet.[3]

The hydroplane K4 began life as Malcolm's "Blue Bird", but when Donald decided to use her in 1949, after his father's death, he renamed her "Bluebird".[2] 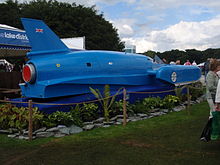