Major Sir Malcolm Campbell MBE (11 March 1885 – 31 December 1948) was a British racing motorist and motoring journalist. He gained the world speed record on land and on water at various times during the 1920s and 1930s using vehicles called Blue Bird, including a 1921 Grand Prix Sunbeam. His son, Donald Campbell, carried on the family tradition by holding both land speed and water speed records.

Campbell was born in Chislehurst, Kent. on 11 March 1885,[1] the only son of William Campbell, a Hatton Garden diamond seller. He attended the independent Uppingham School. In Germany, learning the diamond trade, he gained an interest in motorbikes and races. Returning to Britain, he worked for two years at Lloyd's of London for no pay, then for another year at £1 a week.

Between 1906 and 1908, he won all three London to Lands End Trials motorcycle races. In 1910 he began racing cars at Brooklands. He christened his car Blue Bird, painting it blue, after seeing the play The Blue Bird by Maurice Maeterlinck at the Haymarket Theatre. Campbell married Marjorie Dagmar Knott in 1913 but divorced two years later.[2]

At the outbreak of World War I, Campbell initially enlisted as a motorcycle dispatch rider and fought at the Battle of Mons in August 1914.[5] Shortly afterwards he was commissioned as a second lieutenant in the 5th Battalion, Queen's Own (Royal West Kent Regiment), a Territorial Force unit, on 2 September 1914.[6] He was soon drafted into the Royal Flying Corps, where he served as a ferry pilot, as his instructors believed he was too clumsy to make the grade as a fighter pilot.[5]

During the late 1930s he commanded the provost company of the 56th (London) Division of the Territorial Army. From 1940 to 1942 he commanded the military police contingent of the Coats Mission tasked with evacuating King George VI, Queen Elizabeth and their immediate family from London in the event of German invasion.[7] On 23 January 1943 he was transferred from the Corps of Military Police to the General List.[8] On 16 December 1945, having attained the age limit of 60, Campbell relinquished his commission and was granted the honorary rank of major.[9]

Campbell broke the land speed record for the first time in 1924 at 146.16 mph (235.22 km/h) at Pendine Sands near Carmarthen Bay in a 350HP V12 Sunbeam, now on display at the National Motor Museum, Beaulieu. He broke nine land speed records between 1924 and 1935, with three at Pendine Sands and five at Daytona Beach. His first two records were driving a racing car built by Sunbeam.

Campbell stood for Parliament without success at the 1935 general election in Deptford for the Conservative Party, despite his links to the British Union of Fascists.[13] Reportedly, he once adorned his car with a Fascist pennant of the , though there has been no photographic evidence to support this claim.[14][15][16] 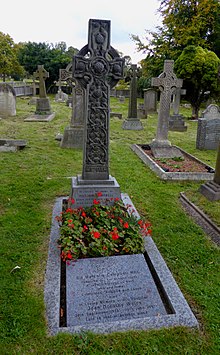 Campbell died after a series of strokes in 1948 in Reigate, Surrey, aged 63 years.[17] He was one of the few land speed record holders of his era to die of natural causes, as so many had died in crashes. His versatile racing on different vehicles made him internationally famous.[citation needed]