Throughout its history, the Italian auto manufacturer Maserati has participated in various forms of motorsports including Formula One, sportscar racing and touring car racing, both as a works team and through private entrants.

One of the first Maseratis the Tipo 26 driven by Alfieri Maserati with Guerino Bertocchi acting as riding mechanic won the Targa Florio 1,500 cc class in 1926, finishing in ninth place in overall.[1]

Maserati was very successful in pre-war Grand Prix racing using a variety of cars with 4, 6, 8 and 16 cylinders (two straight-eights mounted parallel to one another).

Other notable pre-war successes include winning the Indianapolis 500 twice (1939 and 1940), both times with Wilbur Shaw at the wheel of a 8CTF.

Maserati's post-war factory effort in sports car racing began in 1954 for the second season of the World Sportscar Championship. The factory raced as Officine Alfieri Maserati. 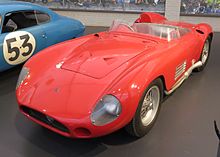 Maserati scored points in all but one year of the first era of the World Sports Car Championship from 1953 to 1961. Both factory-entered and privately-entered cars were eligible to score points for the manufacturer. At the end of 1957 Maserati retired the factory team from racing though they continued to build cars for privateers.

In the 1954 World Sportscar Championship Maserati entered the Maserati A6GCS and placed fifth.

In the 1957 World Sportscar Championship Maserati again placed second. This time with wins at Sebring and

In the 1960 World Sportscar Championship Maserati placed third. With a win at the ADAC 1000 km Nürburgring for a Maserati Tipo 61 driven by Stirling Moss and Dan Gurney.

In the 1961 World Sportscar Championship Maserati placed second. With a repeat win at the ADAC 1000 km Nürburgring for a Maserati Tipo 61 this time driven by Lloyd Casner and Masten Gregory.

Maserati returned to sportscar racing in 2004, entering the Maserati MC12 in the FIA GT Championship. Since 2005 the MC12 fielded by Vitaphone Racing Team won five teams' championships and four drivers' championships in a row.

The cars for the 1987 World Touring Car Championship season were entered by /Imberti. The car was in Group A Division 3 competing against the Ford Sierra RS Cosworth and later in the season Ford Sierra RS 500. The car was driven by Bruno Giacomelli, Armin Hahne, , Mario Hytten, Nicola Tesini and Kevin Bartlett.

For the British Touring Car Championship the cars were entered by . This was for the 1988 and 1989 seasons. The car was driven by Nick May, and Vic Lee.

A former 1987 WTCC car was bought by who converted it for used on road rallies and the company also manufactured the Maserati Biturbo Group A Rally car.

Maserati participated in Formula One motor racing during the 1940s, 1950s and 1960s. Its works Formula One programme was broadly successful, providing a total of 9 Grand Prix wins for the factory team.[2] In addition, Juan Manuel Fangio won the 1957 World Championship of Drivers with a Maserati 250F.

In the 1960s, Maserati supplied engines to British Formula One team Cooper. The most successful car of that collaboration was the Cooper-Maserati T81, which had a Maserati V12 engine. It won the 1966 Mexican Grand Prix and the 1967 South African Grand Prix, driven by John Surtees and Pedro Rodríguez respectively.

Beginnings of Formula One operation

The 1948 Maserati 4CLT was one of the first cars built to the new Formula One regulations, introduced in 1946, and was developed from the 1938 Maserati 4CL voiturette car. The older design was still competitive despite the hiatus of World War II and was entered into Formula One races when racing resumed after the war. Its success encouraged Maserati to develop the car's design and these refinements were brought together as the 4CLT.