McLaughlin Motor Car Company Limited was a Canadian manufacturer of automobiles headquartered in Oshawa, Ontario. The company, founded by Robert McLaughlin, was originally the largest carriage manufacturing company in the British Empire.[1] By 1907 it had grown to include the manufacture of McLaughlin automobiles with Buick engines and in 1915, it manufactured Chevrolet vehicles for the Canadian market. The carriage end of the business was then sold to the Carriage Factories Ltd. of Orillia, Ontario.[2] 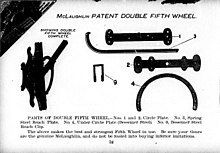 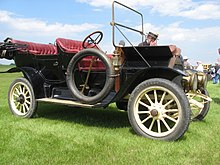 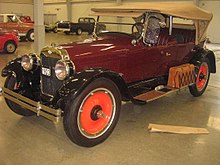 "McLaughlin Carriage Company" began building carriages in 1869 beside the cutters and wagons in Robert McLaughlin's blacksmith's shop in Enniskillen, a small village 20 kilometres (12 mi) northeast of Oshawa. In need of more workers to build his horse-drawn carriages, staunch Presbyterian McLaughlin moved to Oshawa, Ontario in 1876.[3][4]

McLaughlin developed, and in the early 1880s, patented a fifth-wheel mechanism which greatly improved comfort and safety. Attracting a great deal of demand he ignored tempting offers and elected to sell the mechanism to his competitors rather than license other manufacturers. This enthusiasm, now for his complete carriages, spread across Canada and before the end of the century there was a McLaughlin sales office in London, England.[5]

On December 7, 1899 the carriage works was completely destroyed by fire. "We were helpless," R.S. "Sam" McLaughlin later told MacLean's Magazine, "we could only stand and watch our life's work go up in flames. Not only we McLaughlins, but the six hundred men who depended for a living on the carriage works."[6] The City of Oshawa lent McLaughlin $50,000 to rebuild.[7]

"McLaughlin Carriage Company of Canada Limited" was incorporated in 1901 and production numbers that year topped 25,000 units, and included 140 different models and sales exceeded one million dollars.[5][2]

By 1915 McLaughlin was making one carriage every ten minutes. This was the year McLaughlin Carriage Company was sold to Carriage Factories Limited of Orillia, Ontario.[8] The major carriage manufacturers did not close their doors but switched to automobile bodies. Some of the automobiles even retained whipsockets.[5]

"An automobile of the latest design its use I will never disparage, but for comfort and pleasure give me a McLaughlin Reliable Carriage."[5]

Around 1905, Robert's Son, Colonel "Sam" McLaughlin, became interested in manufacturing automobiles and traveled to Jackson, Michigan to purchase a Jackson vehicle. While in Jackson, Sam bumped into Billy Durant who was at the time manufacturing in that city. Sam and Billy had become acquainted as both been affiliated with the carriage manufacturing business.[8] Durant offered to make a deal. To better understand the product, McLaughlin purchased a Buick from a dealer in Toronto and before he was halfway to Oshawa (an approximate 30 mile drive), McLaughlin knew he preferred the design of the Buick over the Jackson automobile. He and Durant, however, were unable to reach a deal to combine manufacturing operations.[8]

Instead, McLaughlin decided to form his own enterprise and in 1907 "The McLaughlin Motor Car Company Limited" was formed.[5] An American engineer by the name of Arthur Milbrath was hired to design the Model A automobile.[6][9] "We brought him [Milbrath] to Oshawa," Sam later recounted, "and installed him in one of our buildings, on the west side of Mary Street, which had been set aside as the automobile shop. We equipped it with automatic lathes an other machine tools, planers and shapers - dozens of machines. From a Cleveland firm we ordered cylinders, pistons and crankshafts to our own specifications, and engine castings to be worked in our own shop. The car was to be more powerful than the Buick." [6] Shortly thereafter, operations came to a stand-still when Milbrath fell ill with pleurisy and the vehicle could not be completed.[6] It has been suggested that Milbraith's ailment was actually a case of "diplomatic flu" which gave the McLaughlins an excuse to partner up with Durant and build Buicks.[8] Milbrath later founded the Wisconsin Motor Manufacturing Company.[10]

McLaughlin wired Durant for assistance and the next day, Durant and two other Buick executives arrived in Oshawa. The two carriage men, Durant and McLaughlin, hammered out a fifteen-year contract under which McLaughlin would buy drive trains from Buick Motors.[11][12][13][14] These cars were sold with the brand-name McLaughlin though the name McLaughlin-Buick also appeared on some vehicles.[15] This alliance with Buick Motor Company controlled by Sam McLaughlin's friend William C. Durant was confirmed by an exchange of a large parcel of McLaughlin stock for a corresponding amount of Buick stock.[16] Durant was a partner in Durant-Dort and like Sam McLaughlin had been the largest carriage manufacturer in his country.

The following year Buick, managed by Durant, formed General Motors.[17] Durant borrowed heavily and bought other automotive businesses for his General Motors including Oldsmobile, Cadillac and Oakland (Pontiac) but vehicle sales collapsed, factories were closed for twelve months and more and in 1910 Durant lost his control of General Motors Company to his bankers. Meanwhile General Motors retained the former Buick shareholding in McLaughlin.[18]

General Motors of Canada Limited was incorporated in 1918 and bought McLaughlin and Chevrolet Canada[20][21][22] and General Motors Corporation spent $10 million building a Walkerville, Ontario plant and establishing Canadian Products. In 1923 the name of the Canadian-bodied model was officially changed to "McLaughlin-Buick"[23] and cars with this name continued to be produced until 1942. Later production was labelled Buick without the addition of McLaughlin or Canada.[20][24]

McLaughlin remained chairman of the board of General Motors of Canada as well as vice-president and executive director of the parent company until his death, aged 100, in 1972.

The first McLaughlin automobile was the 1908 Model F.[15]

Until 1914, the cars were finished with the same paints and varnishes used on carriages. This meant each vehicle required up to fifteen coats of paint.

In 1927 two identical specially designed four-door touring cars were built for the Royal Tour of Canada, one to be shipped ahead to the next city while the other was in use.[25]

In 1936 a McLaughlin-Buick was purchased by the Prince of Wales.[26]

In 1936 the Dunsmuirs, a coal magnate family in Victoria, British Columbia, ordered 3 special order 1936 Buick-McLaughlin Phaetons for 3 of their daughters.[27] In 1937 the Phaeton roadster bought for Elinor Dunsmuir was used to drive US president Franklin Roosevelt around Victoria, BC during his state visit. This is verified by photos appearing in the Daily Colonist and the Victoria Times newspapers Oct 1, 1937 because each of the Dunsmuir phaetons was unique.[28]

Two McLaughlin-Buick Phaetons were built for the 1939 Royal tour. One of these later carried Prince Charles and Diana, Princess of Wales, during their 1986 visit to Canada.[25]

Duties and other import taxes

Residents of other rapidly developing countries living under conditions not unlike US and Canada had a strong preference for well-engineered and robust American cars. The countries of the British Empire – England, India, South Africa, Australia and others – gave preference by charging much lower import taxes on goods from another member of the empire, such as Canada. Taxes were adjusted to the proportion of Canadian content. Canada made and supplied General Motors vehicles to those countries also fitting them with right-hand drive. During World War I Britain erected high tariff barriers to protect their own industry from America's low-priced mass-produced but good-quality cars. By 1923 Canada had the world's second-largest automotive industry. These exports fell to a trickle after World War II[note 3] because Canada was part of the dollar area and therefore set apart from the British Empire's sterling area. The British were struggling to repay US War Loans and unwilling to allow their businesses unrestricted access to Canada's currency to buy Canadian cars.