Mercer was an American automobile manufacturer from 1909 until 1925. It was notable for its high-performance cars, especially the Type 35 Raceabout.

There was considerable talent and backing for the Mercer Automobile Company; Ferdinand Roebling, son of John A. Roebling, was the president, and his nephew Washington A. Roebling II was the general manager. The Roeblings had extensive success with wire rope manufacturing and suspension bridge design; engineering was not a recent concept for them. The secretary-treasurer was John L. Kuser, who, with his brothers Frederick and Anthony, had amassed a fortune from banking, bottling and brewing.

Washington A. Roebling II was friends with William Walter, who had been making a small number of high-quality automobiles in New York City. The Kusers owned a vacant brewery in Hamilton, New Jersey, and brought Walter and his car factory there in 1906. However, Walter found himself deeply in debt by 1909, so the Roeblings and Kusers bought him out in a foreclosure sale. They changed the company name to Mercer, named after Mercer County, New Jersey. Talented designers and race drivers contributed to the new effort, and the focus became proving their product in competition.

The result was one of the most admired sports cars of the decade; the 1910 Type-35R Raceabout, a stripped-down, two-seat speedster, designed to be "safely and consistently" driven at over 70 mph (110 km/h). It was capable of over 90 mph (140 km/h).[citation needed] The Raceabout's inline 4-cylinder T-head engine displaced 293 cubic inches (4,800 cc) and developed 55 horsepower (41 kW) at 1,650 revolutions per minute.[4] It won five of the six 1911 races it was entered in, losing only the first Indianapolis 500.[1] Hundreds of racing victories followed.[citation needed] The Raceabout became one of the premier racing thoroughbreds of the era- highly coveted for its quality construction and exceptional handling.[citation needed]

In the 1914 road races in Elgin, Illinois, two Raceabouts collided and wrecked. Spencer Wishart, a champion racer who always wore shirt and tie under his overalls, was killed along with the car's mechanic, John Jenter. This prompted the company to cancel its racing program.[6] The Raceabout's designer left the company that year, and subsequent designs did not live up to the glory and appeal the Type-35R had earned.[citation needed] 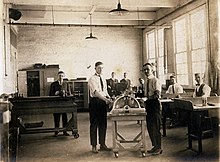 A similar model 1913 Mercer Raceabout, known as a Model 35J, is on permanent display at the Simeone Foundation Automotive Museum in Philadelphia, PA, USA.[7]

In October, 1919, after the last involved Roebling brother died (Washington A. Roebling II perished in the 1912 Titanic disaster), the company was obtained by a Wall Street firm that placed ex-Packard vice-president Emlem Hare in charge, organizing Mercer under the Hare's Motors corporate banner. Hare looked to expand, increasing Mercer's models and production, and also purchasing the Locomobile & Crane-Simplex marques. Within a few years, the cost of these acquisitions and the economic recession took a financial toll on Hare's Motors. Locomobile was liquidated and purchased by Durant Motors in 1922, and Mercer produced its last vehicles in 1925, after some 5,000 had been built.[8]

An independent effort to revive the marque in 1931 resulted in only 3 vehicles being constructed and displayed.