Millennium Luxury Coaches is a Central Florida based manufacturer of custom luxury motor coaches, built at their 100,000 square foot facility in Sanford. All coaches are built using the Prevost commercial bus chassis. Millennium has designed custom coaches for business owners, celebrities and pro athletes[1] which have retailed for over $2,000,000. 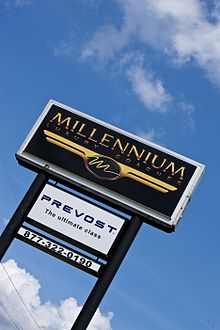 Millennium[2] is an individual owned company in the marine, aviation and luxury coach building industry. After many years of service in the luxury motorhome market, Nelson Figueroa founded Millennium Luxury Coaches in 2000. He launched Millennium Luxury Coaches in Sanford, Florida during the 2001 recession[3] but built the bus conversion company into a leader in the field with more than 80 employees.

In addition to new coach manufacturing, Millennium offers consignment services as well as an extensive second-hand inventory. The Interior Design Center is run by people who decorate and design custom, one-of-a-kind coaches, as well as offering full interior remodels and updates.

In 2013 Millennium started using a Savant systems custom interface, that when paired with an iPhone or iPad, allows Millennium owners to control virtually every aspect of their coach including the lights, awnings, entertainment options, and security system, and even flush the toilets from across the county.[citation needed]

In January 2011 Millennium was a recipient of the inaugural 2011 Florida Companies to Watch Award,[4] as selected by the Edward Lowe Foundation.[5]

In December 2012, Millennium Luxury Coaches announced they had successfully relocated the diesel exhaust fluid inlet to the driver's side of the coach. It had previously been located on the passenger's side, which presented a problem at filling stations because of the pump being located on the driver's side. This stirred controversy as skeptics noted it brought warranty concerns with Prevost. Prevost engineers and management visited Millennium's facility to view the modifications, giving the modifications a thumbs up and eliminating warranty concerns.[6]

In May 2013, Millennium received the Association for Corporate Growth's (ACG) SMART Award for the field of Distribution and Transportation.[7]

In January 2012, Millennium was selected to be featured on the TV show Ultimate Travel for their "Tricked Out Trailers" episode, appearing on the Travel Channel.

In April 2011, Millennium was featured on HouseSmarts TV[9] with Lou Manfredini.

On October 4, 2012, it was announces that Millennium Luxury Coaches was to be featured for an upcoming series titled EPIC which was to air on Destination America, a new cable TV channel celebrating the people, places and stories of the United States. EPIC RVs premiered on Destination America on February 11, 2013. The premiere was well received and featured Millennium for the first full third of the show.

On July 15, 2013, Millennium Luxury Coaches was to be featured on the season 2 premiere of EPIC, on Discovery’s Destination America Network.[11]

Millennium has been featured on the June cover of Family Motor Coach Association Magazine.[12]